Round 5: Toshiki Tsukamoto vs. Tomohiro Maruyama 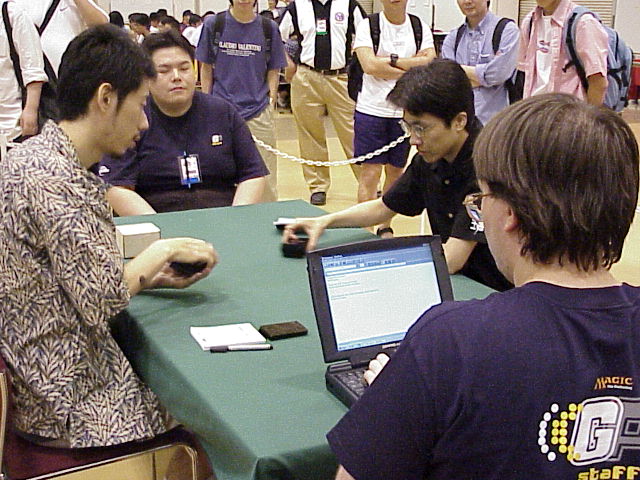 Tomohiro Maruyama was playing one of the more popular IBC decks, GoMar. However, the deck itself was actually 100 percent Dromar, the Banisher free. Meddling Mage, Spectral Lynx, and Desolation Angel provided the path to victory while using Rout, Absorb, Dromar's Charm, and Gerrard's Verdict to maintain board advantage.

Toshiki Tsukamoto is one of the Pro Tour's longest Japanese fixtures. Today, he brought Domain to the sandbox, using Ordered Migration and Questing Phelddagrif to take the table along with enough Collective Restraints and countermagic to keep the threats off the board.

Before the game, Tsukamoto and Maruyama chatted relaxedly. Tsukamoto was smiling and carefree, but while Maruyama's game face was tight, his mind was distracted by the task at hand. The crowd was getting very thick. Tsukamoto won the die roll and elected to go first. 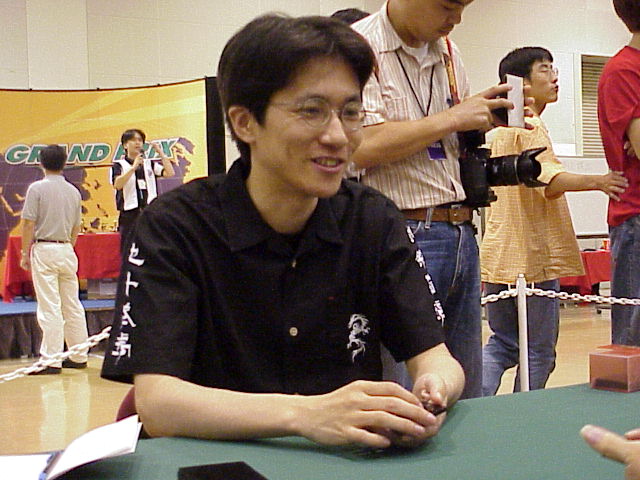 Tsukamoto started off with a Forest and got a plains with Lay of the Land. Maruyama played a Meddling Mage naming Harrow. It was a good call, for Tsukamoto did indeed happen to have a Harrow in hand. A second Mage blocking Global Ruin joined the first. The pair of Mages swung for the fences again, and it seemed as if Maruyama had the tempo advantage.

A set of three Ordered Migration Birds swoops in to join Tsukamoto's team to pester the pesky Meddling Mages. Two of the birds took down the Ruin-preventing Mage. Tsukamoto then topdecked a second Ordered Migration and played it for 3 more tokens. Maruyama let the Birds come into play. Now that Tsukamoto had solidified his board position, it was time for him to take charge.

Two of the little blue fliers stayed on defense while the other two scratched at Maruyama's life total. Maruyama threw a Vindicate at one of the Birds and kept swinging with the Harrow-naming Meddling Mage. Maruyama kept up the Mage offensive and Tsukamoto used Lay of the Land to find a Swamp. The following turn he played a 4-strength Collective Restraint. Amazingly, Maruyama paid the mana and continued his assault!

Tsukamoto carefully considered his options, eventually deciding to play a Global Ruin. Maruyama tried to Absorb, but Tsukamoto used an Evasive Action. Then, after taking another two from the Meddling Mage he used Lay of the Land to complete the domain set. Tsukamoto was sitting on two counters, a near-unbeatable position. The slow pace of the game was evident as the game ended with 20 minutes on the clock remaining. 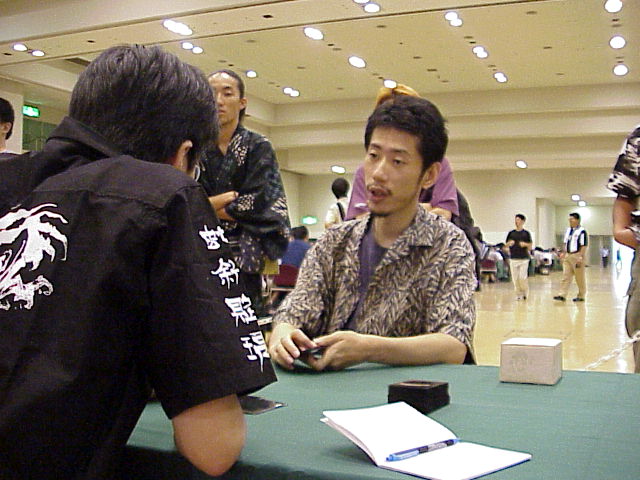 Maruyama had drawn far too many lands in game one, missing proper counter support. He added Routs and Gainsays to help fend off the anticipated waves of birds. Tsukamoto also sided in Gainsay, along with Destructive Flow and Goblin Trenches. Almost all GoMar decks run 12 non-basic lands, so Tsukamoto knew he would hopefully hit GoMar where it hurt the most.

Tsukamoto took a long time deciding to keep his 2 forest hand matched with a handful of blue counters, and drew poorly for it. Maruyama's turn two Spectral Lynx was poised to bring the early beats. Tsukamoto smacked the top of his deck, and received an island for his chastisement. He failed to draw a land for the next two turns, however, and began to play at an extremely slow pace.

Over the next turn, Maruyama played a FOF which was split into 2 Gainsays or 2 Desolation Angels plus a land. Maruyama then Vindicated the sole Plains Tsukamoto controlled. A Meddling Mage naming Harrow came in as well. However, when time was called and Tsukamoto played a Sunscape familiar it was almost certain that the game would end in a draw. At this point, the Head Judge interceded, stopping play. He determined that Tsukamoto's speed of play was too slow and, because Tsukamoto hadn't been warned by the table judge, reduced the match-loss penalty to a game loss in the next match.

3 Lay of the Land