Round 5: Ubermensch vs. Team Guam 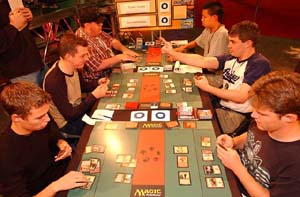 Advancing to day 2 requires a 4-2 record at this event, and both of the illustrious teams decided to pick up their two losses early just to make things interesting, and are now playing for their lives.

Team Guam (named in honor of the dearly departed Dan Clegg, who is rumored to be living in Guam) is comprised of American Eric Froehlich and two-thirds of the Dutch National team, Noah Boeken and Kamiel Cornelissen. Their opponents, Ubermensch (some sort of Kiblerersque pseudo-intellectual Nietzche reference), are Brian Kibler, Ben Rubin, and Ken Ho, all formerly of the Magic Colony.

As fate would have it, their deckbuilding ideas were quite similar, resulting in three mirror matchups: Rubin vs. Boeken with red/green, Kibler vs. Kamiel with blue/white, and Ho vs. Froehlich with blue/black.

The middle match was over the quickest. Kibler's deck was not at all built to handle the mirror match, sporting things like Pilgrim of Virtue and Border Patrol. Kamiel's deck, on the other hand, had flyers, Dreamwinders, and Psionic Gifts.

Things went poorly for Kibler when Kamiel Syncopated his turn-3 Cephalid Looter. Kamiel then untapped and played a Think Tank, sort of a poor man's Looter, but card filtering nonetheless. The filtering made all the difference; as the game progressed, Kamiel had out three fliers and a Gifted Shieldmage Advocate to Kibler's random ground creatures. Kibler fell quickly. 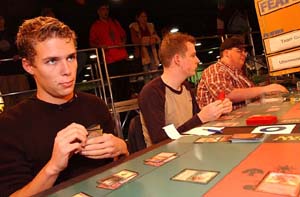 Kibler had a good defensive opening in the second game, with a Kirtar's Desire for Kamiel's Dreamwinder, a Syncopate for his Aven Cloudchaser, and a Fervent Denial (from the sideboard) for his Skywing Aven. But when it came time to put out his own creatures, he had nothing left. Kamiel eventually drew a couple little guys, two Psionic Gifts, and a Battle Screech, and Kibler was left holding a bunch of tricks like Embolden and Aven Warcraft. It wasn't even close.

In the black/blue match, Froehlich started off with a couple quick beaters, but Ho dropped Masked Gorgon on the fifth turn with a big smile on his face. Froehlich shook his head, then untapped and Mind Sludged the other four cards out of Ho's hand (Grotesque Hybrid, Dirty Wererat, Psionic Gift, and a land). Froehlich dropped a Soul Scourge and was looking to win the race with the Gorgon easily. But Ho drew a land and a Morbid Hunger after the Sludge, and gave himself six life by killing the Soul Scourge. Froehlich couldn't believe it. He'd have to start chumping the Gorgon soon if he didn't come up with a quick answer... which he did, in the form of Faceless Butcher off the top.

"Some people are so lucky!" lamented Ho as he scooped up his cards.

Meanwhile in the red/green match, Noah was in command with a Rabid Elephant and an Arcane Teachings-enhanced Krosan Archer. Rubin put out a few roadblocks, but Noah had sufficient other burn spells to clear the way. Eventually Rubin drew land number seven and played his last card – Roar of the Wurm. Noah frowned. An attack with the Elephant backed up with a "ping!" from the Archer killed the first Wurm, but the second one looked to be a problem.

That is, until Noah drew his own Roar. Two wurms traded, but when Noah flashed his back, Ben had no defense for it.

Team Guam was in command and loving it. The trash talk was flying. Ho was taking it in stride, smiling, but Rubin was becoming quite annoyed with Noah's penchant for getting distracted.

Back in the black/blue match, Froehlich started off with a bomb – Possessed Aven. Ho had a Faceless Butcher for it, but Froehlich had his own Butcher. Ho put out a couple small fliers and two Dirty Wererats, but Froehlich was winning the race in the air. Eventually Ho drew his Morbid Hunger and cast it, killing Froehlich's Butcher and getting his own back to remove the Aven, AND giving his Wererats threshold. Froehlich had no answer to that, and just like that he went from a winning position to losing. 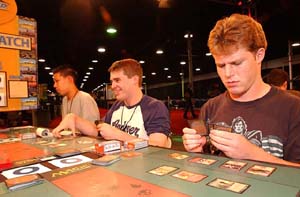 Game 2 in the red green match came down to one player drawing good cards and the other not. Rubin put out a Krosan Archer, Brawn, and a Dwarven Strike Force and got a free one-for-zero when Noah bluffed and attacked with a Nantuko Tracer into the Archer and didn't have a combat trick to back it up.

But those weren't the good cards. Noah killed just about everything Ben had with Firebolt, Flame Burst, Violent Eruption, and Lightning Surge. Eventually a thresholded Springing Tiger came over an put Rubin, and the Ubermensch, out of their misery.

Froehlich conceded a losing position to Ho, making the official tally 2-1. Rubin slumped in his chair and showed Boeken the two Wild Mongrels and Arrogant Wurm that he never drew.

Ubermensch are eliminated; Team Guam must win round 6.