Owen Turtenwald is the man everyone's chasing. He leads the Player of the Year race with 45 points heading into this weekend. Like many of his ChannelFireball.com teammates, he's playing their brew of Naya Zoo. Asking him about his choice, he said "Well, if you asked me yesterday, I wouldn't have been confident, but seeing the field today I'm really glad with my choice. We're really good against the creature decks, and a lot of the combo decks rely on creatures (poison, Splinter Twin) so our removal is good there. Plus we have four Green Sun's Zenith and Gaddock Teeg. We might be a little weak to Pyromancer's Swath decks, but I think they're pretty inconsistent."

Ben Wienburg is a PT regular who's been doing well on the StarCityGames.com Open circuit, hoisting at least one Legacy trophy. He's also playing the Naya colors, but his Zoo skews much more towards the aggressive. He chose it because of its quick clock, and because of a perceived fragility in the field's combo decks. He believes that just a little bit of disruption is all it takes to knock them down. 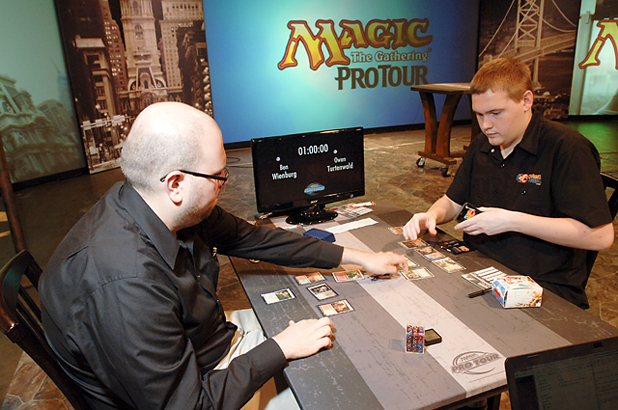 Ben Wienburg and Owen Turtenwald spend a day at the Zoo.

While they were shuffling they compared losses. Both were at a comfortable 3-1. Wienburg's loss was at the hands of Pyromancer Ascension, Turtenwald's to Twelvepost. While they chatted, Turtenwald mulliganed to six, then to five with a frown.

Wienburg kicked off with Arid Mesa into Stomping Ground and Kird Ape. Turtenwald answered with a fetched Temple Garden into Wild Nacatl. He got a breather when Wienburg spent his second turn simply attacking for 2 and playing a Verdant Catacombs. He untapped, dropped a tapped Steam Vents to fully charge up his Nacatl, and held back. Wienburg not only had no play at end of turn, but simply played another land and passed.

That was a big break for Tutenwald. He swung in for 3, played a Steam Vents, then cast a Green Sun's Zenith for a second Nacatl. This one was met with Path to Exile, and Turtenwald got himself a Plains.

Wienburg hit for another 2, leaving Turtenwald at 13. He fetched again, this time for a Plains and spent his four mana on Tarmogoyf and a Tribal Flames that went to the dome for the full 5. Turtenwald took a defensive stance behind Elspeth, Knight-Errant, her Soldier token, and his Wild Nacatl. Wienburg untapped and paused, seemingly torn between lines of play. He chose to shoot down Elspeth with Tribal Flames, attack with his Tarmogoyf (eating the Soldier), and cast a second Kird Ape.

Unfortunately for him, Turtenwald had a second Elspeth to get his shields back up. Wienburg swung in with all three creatures, knocking Turtenwald to just 5 life but losing a Kird Ape to the Nacatl in the process. He had nothing to add to the board. Turtenwald sent his Nacatl skyward with Elspeth, evening things at 5 apiece. He added Knight of the Reliquary and passed it back. Wienburg sent his Tarmogoyf, but Turtenwald was ready with Path to Exile. With no way to stop the boosted Nacatl on the next turn, Wienburg scooped.

Again Wienburg opened the action by taking 3, this time for a fetched Stomping Ground and Wild Nacatl. Turtenwald took 3 himself to dispatch it with Lightning Bolt. Wienburg went to fourteen to get himself a white source for Loam Lion. Turtenwald made a Nacatl, but Wienburg had the Bolt ready. 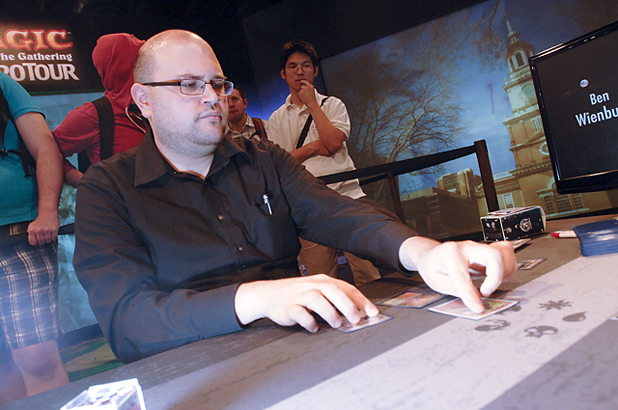 Wienburg hit for two and played a second Loam Lion. Turtenwald did nothing but play a tapped sacred foundry. Wienburg hit for four and added Kird Ape to the mix. Once again Turtenwald tried to hide behind Elspeth, Knight-Errant, but this time Wienburg had a Lightning Helix for the token, and then after his attack, a Tribal Flames for 5 to seal the deal.

Now it was Wienburg's turn to mulligan. He joked, "Have to go down to five to have a chance in this match-up," but stayed at a reasonable six.

Turtenwald opened with Temple Garden and Noble Hierarch. Wienburg took 2 for Stomping Ground into Kird Ape. Turtenwald played a Misty Rainforest and a Wild Nacatl. Wienburg untapped and binned the Cat with a Lightning Bolt. He hit for 2 and played a Scalding Tarn.

Four mana for Turtenwald meant Elspeth, Knight-Errant and her helpful Soldier token. Wienburg fetched at end of turn for Sacred Foundry and Path to Exiled the token, giving Turtenwald a Forest. He swung at Elspeth and finished her off with a low-power Tribal Flames. He had no follow-up, however. Turtenwald untapped, and played Path to Exile on the Ape when it attacked a second time. Still Wienburg had nothing. 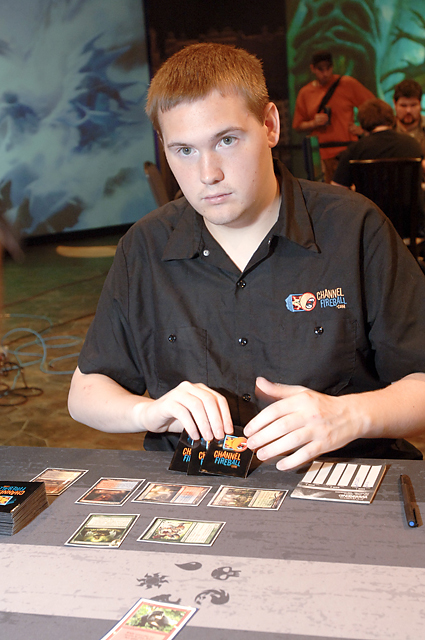 Turtenwald went on the offensive with a fetched-out Dryad Arbor, hitting for 2 thanks to Noble Hierarch. Wienburg was down to just 11, while Turtenwald was at a comfortable 18. Turtenwald tried to increase his clock with Wild Nacatl, but Path to Exile got rid of it handily.

For a couple turns they pushed each other back and forth. Lightning Bolt took care of the Dryad Arbor, and then Deathmark killed the Hierarch. Wienburg's attempted Kird Ape was Pathed, and he couldn't find another threat.

Not so for Turtenwald, who tapped five for Gideon Jura. The strangled "Uuuuuuuugh" from Wienburg said it all. He drew one card, confirmed his life total was 6, and packed up.