Round 5: Welcome to the Bubble

his round was going to be a pivotal one for all of the players involved. At a record of 2-2, both teams had to win out in order to play on the second day. Before the match had even started, however, Top8Magic.com co-owner Matt Wang conjectured the coverage team had conspired to pick this match simply so they could pruriently announce his last name next to Martin's and Nick's. 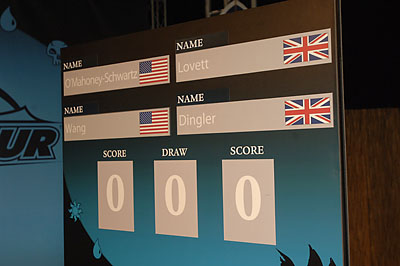 Our high level of maturity and journalistic standards mean we won't giggle when we see this.

While shuffling, Martin confessed he and Nick have really only been playing together as a 2HG team for the PTQ season and this event. Matt and Steve recently won the 2HG Grand Prix together in Massachusetts, though both teams are relatively storied. Steve is a Limited Pro Tour champion as well as 1/3 of the famous Team Antarctica, and Dingler and Lovett have a Pro Tour Top 8 and Grand Prix championship between them.

The Brits won the die roll and opted to play, but not before agonizing over the decision. Martin kept his opening, but Nick had to ship his back. Upon review of his teammate's new seven, Martin Dingler had this comment: "Uh…that's the same hand."

Nick had no choice but to ship yet again, and took a look at six cards instead of seven. They resigned to keep the six, and it was Matt Wang's turn to send a hand back. Unfortunately for Martin and Nick, his second seven were acceptable, and they were off.

The players revealed themselves to be playing the following archetypes: Matt Wang was on black-white, Steve OMS and Martin Dingler were with blue-red, and Nick Lovett was running green-black. The New Yorkers were the first on the board with Matt's Augur of Skulls, but the Euros answered back with Basalt Gargoyle from Dingler, who placed a marker on top of his library to remind himself of the echo, and Wormwood Dryad from Lovett. 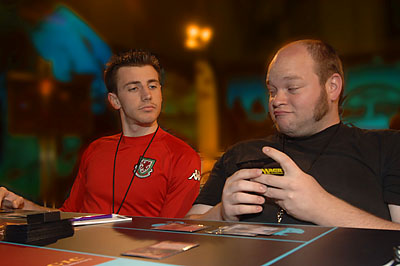 Sometimes a look is enough between two teammates.

Matt opted to sacrifice his Augur during his first upkeep to nab two cards from Nick's hand, but the play simply merited a shrug from Lovett who discarded two lands. Wang threatened to make the play a recurring theme by playing an Undertaker. Steve added Serendib Sorcerer before passing the turn.

After drawing their cards, the British players opted to attack for 6, dealing one to themselves by landwalking the Dryad. Between that and the echo on the Gargoyle, however, they were too low on mana to make any other plays and shipped the turn back.

Matt and Steve had plenty of mana, however, and looked to provide plenty of action for the turn. Things looked that way initially as Matt discarded a Dark Withering to return Augur of Skulls with his Undertaker, nuking the Basalt Gargoyle in the process. After that, his team suspiciously passed the turn despite the fact Steve still had four mana available and Matt had enough to re-play the Augur. Not wanting to fall too far behind on their turn, Dingler and Lovett were forced to play into potential tricks anyway. A Dead from Dead//Gone targeting Undertaker elicited a Whitemane Lion from Matt. That in turn nabbed a Cancel from Martin, tapping him out. THAT in turn earned a Logic Knot for one from Steve OMS and when the stack resolved, Whitemane Lion bounced the Undertaker, countering Dead after Logic Knot had countered the Cancel.

Things weren't looking good for the Brits. Matt and Steve were threatening to put things out of reach with recursive Augur of Skulls, and Steve had managed to add an attacker in the form of the 3/1 Infiltrator il-Vec. Not willing to go out without a fight, Nick struggled to get his Sprout Swarm going while Martin dropped an Aven Augur to disrupt their opponents's plans.

That didn't look like it would be enough either as a Stingscourger disrupted the Augur plan for the Brits for at least another turn, though Dingler did manage a Rift Bolt on Undertaker. A quick look at hands revealed Steve was sitting on a Triskelavus, which promised to cause a great deal of trouble for his opponents, while Nick, with only Forests and Swamps in play, was desperately hoping for a Mountain so he could cast his Stormbind. 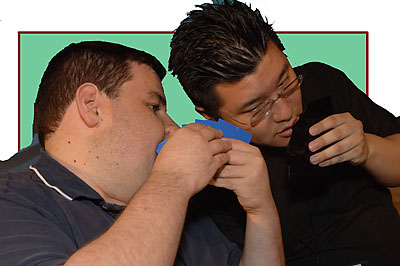 Steve and Matt huddle before making the big decision.

The game stood at 24-15 with the Americans in the lead. Their dominating board position consisted of Deepcavern Imp, Whitemane Lion, Saltfield Recluse, Serendib Sorcerer, Infiltrator il-Vec, and Stronghold Rats. Dingler and Lovett, on the other hand, had only a Wormwood Dryad and two Saprolings, with Martin having 0 non-land permanents in play. He tried to change that by playing a morph, but it appeared to be too little too late. Steve, perhaps nervous his team's excellent standing in the match could be undone by a clever slow roll from his opponents or trying to rattle them, began pressuring his opponents about whether they had more plays each time they did something.

A second attack from the Americans saw the Brits put four blockers in front of the Whitemane Lion: three saprolings and a Wormwood Dryad. The play was their only option as Lion was the only attacker they could block and any fewer blockers meant the onboard tricks of Recluse and Sorcerer would have saved the cat. The attack dropped Dingler and Lovett to 8 and things were well past the point of dire. Lovett played silly and cast a Utopia Vow on his own Saproling while Martin performed a one-man show about how poorly things were going. Matt and Steve gave a chuckle, but Steve, sitting on a counter he had Mystical Teachings-ed for, was still a bit reserved.

That was the right state of mind as the play turned out to be a devious plot. The Vow provided the red mana Lovett had been looking for, and his Stormbind finally came down. Unfortunately, he knew his team's fate was sealed as the Logic Knot dropped from Steve's hand to nix the problematic enchantment. Martin played a second Mountain from his hand, which Steve had prophetically predicted he would draw just a single turn prior, and bemoaned the fact he could neither pay for the Logic Knot which had targeted his teammate's card nor allow his teammate to utilize his Islands and Mountains.

The board stood at 24-8 in favor of the Americans whose board had more creatures than Animal Planet during sweeps week while Nick and Martin looked on helplessly with two saprolings. An attack with their evasive creatures and a pump from a surprise Leaden Fists left no questions: the Americans move on to the final round for the chance to play Saturday while the Brits turn to Side Eventing.