Round 5: Wessel Oomens vs. Alexander Witt 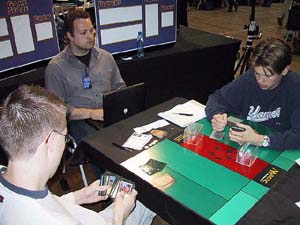 Alexander Witt won the Masters in Nice last May after going completely undefeated. Wessel played Top 8 in the very first Grand Prix ever held, which was in his hometown in Amsterdam, and he keeps on putting up great records.

Both are playing white and blue although Wessel just splashes the blue for four cards among which Ghostly Wings. His deck relies more on green spells.

Alexander cast Suntail Hawk on turn one, next turn he enchanted it with Skywing Aven and attacked. Wessel replied with a Patrol Hound, which got enchanted with Kirtar's Desire. Alexander continued playing good spells as Battlescreech followed up Militant Monk. Wessel freed his Patrol Hound from the Desire enchanting it with a Floating Shield, naming white. This enabled the Hound to be unblockable since Alexander only had white creatures in play. Alexander seemed not disturbed by this fact since he flashbacked Battlescreech, which then totalled a number of five flyers on his side.

Both players started taking a little more time, as the situation demanded more careful studying. However both players played a similar deck, Alexander's was more focused on flyers. And they proved very a troublesome factor for Wessel. Alexander continued 'abusing' spells like Ghostly Wings enchanting his Militant Monk. At one time both players had a Monk with a Wings and when Wessel's Monk blocked Alexander's, it was Wessel who got forced to bounce his, since Alexander could play Guided Strike. The fact that Ironshell beetle had made Wessel a 4/3 Monk did not make a difference. 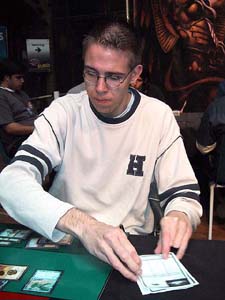 Wessel took a fresh breath casting Nomad Decoy. Still he went down to 9 life from all flyers he could not stop. Next turn the activated Decoy denied Hydromorph Gull from entering battle. Yet Wessel kept getting severe beatings lowering down to 1 life. In a final attempt to draw a lifesaving card he hit the top of his deck. It didn't help him out though.

Wessel seemed to have but a few cards to side in against Alexander, who himself exchanged just two cards as well. Wessel chose to start and the card disadvantage was compensated by Alexander's mulligan to six cards.

Wessel cast a Mental Note at the end of Alexander's first turn and besides his third turn Nomad Decoy nothing exciting happened, especially on Alexander's side. Wessel took the liberty to attack with the Nomad and cast a Werebear.

The first spell played by Alexander this game however started a name-calling throughout the rest of the game as Alexander said 'fattie was in the house'. And Wessel claimed it was 'a fattie he could not deal with'. Every other creature cast from then on, however small, was called a 'fattie'. But none could stand the comparison with the 'almighty' Zealot.

Still, a few turns later Wessel created a monstrous Basking Rootwalla, as it received Elephant Guide. Alexander played a Kirtar's Desire on it but Wessel freed it with a Floating Shield, just like in the first game. Decoy remained a nuisance for Alexander who kept on threatening with flyers such as Wormfang Drake.

The fact that Wessel only kept seeing one plains made the choice tougher between keeping his mana available to activate the Decoy, or cast spells. This loss of tempo was one of the reasons Wessel had difficulty taking control of the game. Alexander cast Tattoo Ward on his Guardian resulting in Wessel to take a good look at the enchantment. 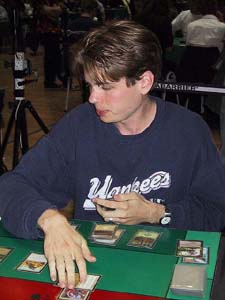 Unable to use the Decoy this turn in order to slow down Alexander's attacks Wessel got down at four life. It now became more challenging for Wessel to plan his attacks. He chose Rootwalla, changed his mind, and started rethinking his options. Next turn Decoy could be insufficient to survive the second game, and the match. He sent the Rootwalla to attack. Alexander responded by disenchanting the Elephant Guide sacking his Ward and diminishing the impact of Wessel's attack. A Nantuko Cultivator then appeared on his side leaving open his plains.

Alexander attacked with everything putting Wessel at one life, then cast Wonder.
Wessel was a bit off-guard and attacked with Nantuko Cultivator and then realised if Wonder got in the graveyard he would die the next turn. Indeed the Wonder blocked but then Alexander had his Militant Monk prevent one damage to Wonder so it stayed in the game.

In what could be the decisive turn Wessel tapped the Monk. Alexander calculated the risk of a nullified attack with Moments' Peace or Serene Sunset. He attacked only with the Zealot and Wessel indeed reacted with Serene Sunset. But it remained nothing but a simple delay before Wessel had to declare defeat.
.
Final Result: Alexander Witt won, taking the match.