Round 5: Wilfried Ranque vs. Kai Budde 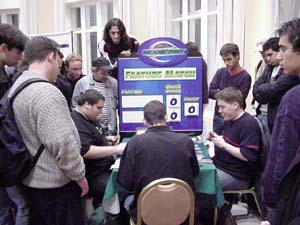 One of the best known French players squares of against a young German player who might have won game tournaments before, called Kai Budde. In New Orleans he quoted the Borg, so we finally found out where he gets his game. Wilfried Ranque is one of the few players who can actually dwarf most of the Pro Tour players.

Kai came out screaming with a second turn Wild Mongrel while Ranque pumped up with mana with the tricky Millikin. The Mongrel gained a Psionic Gift immediately knocking out the Millikin. Ranque recovered the Millikin with a Gravedigger prompting the first line of the round.

The Mongrel kept swinging, soon joined by a Phantom Whelp, Nantuko Disciple and Still Life. Wilfried tapped out to cast a Diabolic Tutor.

Budde: "Sure. It's going to hurt on the next turn."

The next attack sure hurt, bringing the French all the way down from sixteen to six in a single swing. Shaking his head, Wilfried could only drop the Millikin and pass the turn. The Mongrel again tried to get rid of the artifact but Ranque had a Muscle Burst ready for it.

After some thought Budde sent the Still Life and the Whelp in. The two blockers jumped in front of the Centaur (Still Life), which traded with the help of the Disciple. One draw later, the French conceded.

Again the German Borg came out smoking with a Phantom Whelp and a Dusk Imp, but this time Wilfried was quicker in his answer: Krosan Archer. Budde Repelled it to get an extra swing in but that was all he could do.

With the returned Archer locking him up, Kai used a Careful Study to refresh his hand before playing a Famished Ghoul. The French liked controlling the game so much, he played an Elephant Ambush and promptly sent it into the Red Zone before playing a Dirty Wererat.

The Borg pondered on his next move for a few minutes, perhaps surprised by this turn of events. He sent in his Ghoul trading it for the Wererat and dropped the perfect answer for the Archers: the protection from Green Treetop Sentinel.

Ranque couldn't solve that for the time being, so he used a Patriarch's Desire to kill the Nantuko Disciple while Budde was tapped out, to minimize his problems. He was already seven points behind in the damage race. After some deliberation he used a Morgue Theft to bring back his Wererat.

The Sentinel took another swing at Ranque before Kai dropped his own Krosan Archers. Again Ranque stepped into his think thank carefully pondering his cards, looking for a way out of the ground lock or at least a way to stop the unblockable Blue flyer.

Finally he beefed up his Archers with a Seton's Desire (with Threshold active) and sent his monsters in killing two creatures. Now Budde had to decide whether he should keep the Sentinel back or simply chump with his remaining blocker, a Diligent Farmhand, and anything else he could muster.

He attacked with both and played the perfect "creature" to sneak away from the Seton's Desire Lure effect: Still Life. But Ranque wasn't going down so easily: he found a Morbid Hunger to finally get rid of the Sentinel and gain some precious life points. 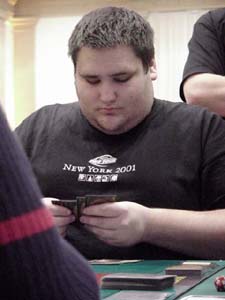 Budde sent the Centaur (Still Life) in and Ranque tried to traded it for the Elephant Token but a timely Afflict saved the attacker. With his mana finally gearing up Wilfried dropped a Gorilla Titan to hold the fort while the never-resting Archers tried to finish up the game.

A Seton's Desire pumped the Centaur, momentarily at least, to get rid of the Titan but still the Borg couldn't find a way to turn the tide. He placed his hand on the table and took a deep breath replaying the Phantom Whelp before passing the turn.

When the Archers came in once again, Budde finally had an answer for it: Ghastly Demise with thirteen cards in his graveyard. The troublemaker was gone but Ranque fetched fresh problems with a Diabolic Tutor on the next turn.

He had a Dreamwinder, which Kai traded for with a Cultural Exchange but Wilfried liked his creature so much he used his own Cultural Exchange to get it back! The Whelp killed it once but a Flashbacked Morgue Theft got it right back prompting the German Juggernaut to scoop up his cards.

Heading into the third and decisive game, they slightly retouched their sideboards while the crowd, at least three rows deep, circled the table with little respect for any claustrophobic player.

Kai took a mulligan and Ranque tried to prey on that with a second turn Mongrel that gleefully strolled into the deserted Red Zone. The Borg reacted with a Dusk Imp followed by Nantuko Disciple and the bouncing Phantom Whelp.

With mana problems Ranque seemed forced to watch a reply of the first game as Budde filled the Red Zone with creatures. He blocked the Whelp with the Mongrel and discarded a Scrivener to save it. He strangely sacrificed a UB Egg burning for two as well.

On the following swing he tried to stop a Krosan Archers with the Wild Mongrel and a freshly cast Dirty Wererat. With the help of the Disciple and an Afflict, Kai traded the Archers for both blockers. Still the Imp ruled the skies bringing Ranque all the way down to six before perishing under a Morbid Hunger.

Since the flying plan was working Kai played the Treetop Sentinel. Ranque finally felt safe enough to drop a Gravedigger and attack with the stranded Mongrel. That didn't last long because Kai found his own Mongrel and with five cards in his had effectively relocked the ground.

Ranque's next turn Gorilla Titan wasn't enough. Kai dropped a Threshold Seton's Desire on the Disciple and sent the crew in pumping his Mongrel with enough to finish the French.