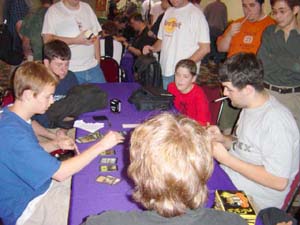 Round Five paired William "Huey" Jensen, one of the Pro Tour's most entertaining regulars against Max McGuffin, a local player and Junior Super Series Champion. Huey immediately announced his distaste for the format to me.

"This is the worst format ever, right?"

I mentioned Masques Block Constructed, Academy type 2, and Urza Block Constructed. There was no swaying him though. He told me there was at least more of a deck choice in those formats. It surprised me because I knew that he was bringing a very rogue deck to the table. Huey was playing a red/black sorcery deck with Mirari, Burning Wish, Diabolic Tutors, and Magnivore.

Max chose to play a version of Green/Blue Madness. His deck looked fairly standard except that it played both Elephant Guides and Quiet Speculations.

Max won the die roll and started things up with the popular turn one Careful Study. The Study got him a Rootwalla in play and a Deep Analysis in his graveyard. He followed it up with a turn two Quiet Speculation for 3 Roar of the Wurms. Huey wasn't bothered by any of this. He played Tainted Pact, found a Burning Wish and Wished for Tombfire to clean out Max's graveyard. Max didn't let this stop the beats. He played an Elephant Guide on the Rootwalla and started beating him down with the Rootwalla and a Mongrel. 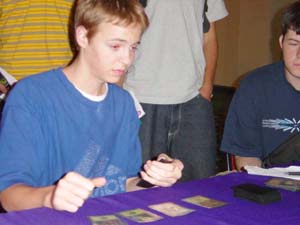 Huey was in trouble. He was down to 12 and could only answer with a Diabolic Tutor. Max attacked and pumped putting Huey on 4 life. Huey brought the Mutilate he tutored for down on Max's team. Max still had an Elephant and knocked Huey down to one life. Huey had a long way to go to turn the game around. He played Edict on Max's next creature and Tutored again. He tried ending the game early with a huge Magnivore, but Max had the Circular Logic to end that plan. Neither of them did much for the next three turns. Huey played and then flashed an Earth Rift trying to knock out Max's green mana. Max had a nearly endless supply of forests from his hand though. Max made an Arrogant Wurm, then a Rootwalla, then a Mongrel, but Huey made him sack each of them one at a time. Finally Huey found a Recoup and began to go to work on Max. He Recouped a Tutor, Tutored for Mirari, drew into a Tainted Pact. Copied the Tainted Pact. Then copied a Burning Wish and Morbid Hungered his life back up to 7. Max gave up after this and conceded.

Game 2 was another close one. Max started off with a Careful Study that didn't trigger a madness card or put a flashback card in the graveyard. He sacked his turn two Aquamoeba, then countered an Innocent Blood to keep his turn 3 Mongrel alive. He brought out another Mongrel the next turn to join the team. Huey tried to Mutilate them, but Max had another Logic. It looked bad the next turn when Huey tapped out for Mirari, and Max added an Arrogant Wurm to the team. Max knocked Huey down to only six life, but Huey was not phased. He untapped and Burning Wished for Mutilate.

Max played a Squirret Nest to get back into the game and Huey just laughed at him. 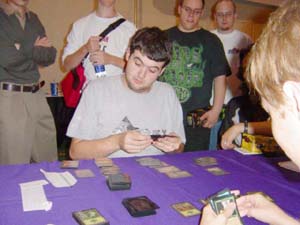 Huey took his turn and Diabolic TutoredX2 thanks to Mirari. The next turn he Burning WishedX2 for a Rancid Earth and a Morbid Hunger. He tried to remove the Nested land the next turn with the Rancid Earth, but Max had Envelop. Max proceeded to Careful Study out two Rootwallas the next turn. Huey just Morbid HungeredX2 and they were gone. From here it got more disgusting. He WishedX2 then killed off the Squirrel's Nest. Next He Mind Sludged and WishedX2 again for two Burning Wish. His next turn he WishedX2 and WishedX2 again. Then he began to Earth RiftX2 Max's lands. Max conceded.