Round 5: Zvi Mowshowitz vs. Kai Budde 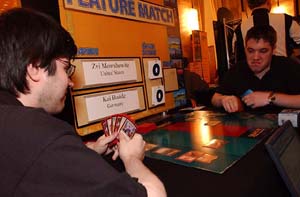 Kai raised one finger in celebration when Zvi cycled a card on turn 1. Before then, Kai wasn't positive he knew which deck Zvi was playing, but that cycled Akroma's Blessing confirmed that Zvi was running Slide and that matchup is Kai's favorite. Budde is running a four-color Explosive Vegetation deck full of enormous monsters that Slide isn't good at dealing with. Budde's turn 4 Vegetation enabled him to play a turn 5 Silvos and still have a green source untapped so he could regenerate. Assuming the guy with the Silvos remembers that you can regenerate from Akroma's Vengeance, there's not a single card in Slide that can permanently deal with the green pit fighter legend. To add insult to injury, Budde played Biorhythm on his sixth turn and won the game immediately. Those two cards – Biorhythm and Silvos – are what give Budde such an amazing game against Slide and if he keeps running into Slide decks he could be looking at PT win #8 come Sunday. 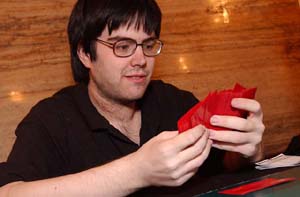 Zvi got to flip over a turn 4 Exalted Angel in game 2 and Kai just took the beats while he built up his mana. He cycled two Tuskers and then played Explosive Vegetation. Zvi then added Rorix to his board and that dropped Budde down to 1. Budde had Starstorm to sweep away the Angel and the Dragon after he untapped, but Zvi showed him an Avarax and that was that. "I hate Exalted Angel" was all Budde could say as he shook his head and started shuffling for game 3.

Zvi baited out Kai's Shock with a turn 2 Stoic Champion in game 3 and that meant Kai couldn't do anything about Zvi's turn 3 morph creature. Kai cycled a Tusker during his fourth main phase, leaving up a mountain and commented "I could mise here ... cut me to a Shock please." Zvi cut to a non-Shock card and then flipped over his Angel on turn 4 and started attacking. Kai played Vegetation followed on his next turn by Silvos, but by then Zvi had a Lightning Rift and the race was not looking good for Budde. He was forced to play out a pair of Ravenous Baloths just to sacrifice them for life. However, Zvi had plenty of cycling cards and the game was all over except for the whining: 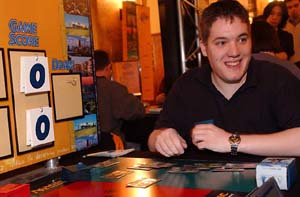 KB: God ... you can only win with turn 3 Angel!
ZM: Well then why'd you Shock the Stoic Champion?
KB: I had to ... my hand had no early defense.
ZM: That's why I sideboarded them in.

After Kai walked away, Zvi confided in me that he thought Kai was wrong about the Angel being his only route to victory. Stoic Champion plus Lightning Rift can also get the job done. Interestingly, this was actually Budde's second loss of the tournament and both have come at the hands of the Slide decks that he has such a big advantage against.