Some of the most fun moments we have on the coverage team are those where we open things up and try to get people involved in what we do while we're here. During Round 4, we took a poll of the viewers in the Cover it Live chatroom about which team they would most like to see in the feature match area. Then, after tallying the votes, Team Brazil won out. 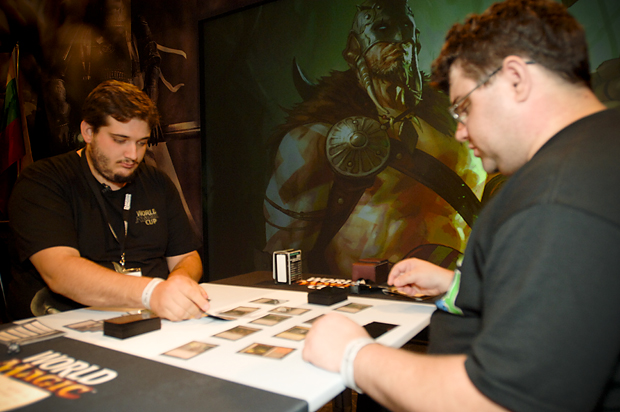 Fondas Papadatos of Greece and Juliano Souza of Brazil face off!

Souza got on the board first, playing a Gravecrawler off a Blackcleave Cliffs. Unsurprisingly, the Cavern of Souls he played on the following turn was declared a haven for Zombies, tapping immediately to play a Diregraf Ghoul. Papadatos and his UW Delver of Secrets deck slowed the bleeding some, using a Vapor Snag to send the freshly cast Ghoul to Souza's hand before refusing it entry a second time with Mana Leak. Souza had a second copy of the creature, though, and he increased his army to two.

At this point, Papadatos was a little behind, but not by much. He played a Geist of Saint Traft on his turn, giving him one creature to Souza's two. Souza gave him an opportunity to trade, attacking in with both of his Zombies, and Papadatos unsurprisingly took 4, dropping to 12. Souza ended his turn by playing a Skirsdag High Priest, which was likely to get an activation in the future. Papadatos sent his Geist in to Souza, who was unable to trade with it, so he let it and the accompanying Angel drop him to 13. After combat, Papadatos passed the turn back to Souza with cards in his hand and all of his mana untapped.

Souza needed a way to get back ahead of this race. He was facing a pretty quick clock in the Geist of Saint Traft. He made a Knight of Infamy to deal with the Geist and also made a pair of Blood Artists to add some punch to his assembled masses. When the Geist attacked, Souza blocked it, drawing a Restoration Angel from Papadatos to save it. The Angel still hit for 4, dropping Souza to 9, but things weren't as clear cut as they seemed.

One of the impossible-to-overlook aspects of the Zombies deck is the incredible reach it has in the later stages of the game. Papadatos was at 12 life, but the pair of Blood Artists in play made him leery of blocking any of Souza's creatures. He took the full first attack, dropping to 5. After that, thanks to the two Blood Artists in play, there were no right decisions for combat. As they tend to do in the later stages of the game, the Blood Artists provided the perfect Catch-22, delivering the first game to Souza, signed in blood.

Once again, Souza started with a quick Zombie, using a Cavern of Souls to play a Diregraf Ghoul. The Ghoul's drawback became relevant when it was hit by a Vapor Snag during its first attack. Souza simply replayed it, but Papadatos had effectively bought himself three turns for one mana. Souza had no play other than to replay the Ghoul, putting him quite behind where he would ideally like to be. He did manage to get back on track on the third turn with a Geralf's Messenger, but Papadatos avoided a massive headache by removing it with Celestial Purge. He followed that up with a Gitaxian Probe, revealing a pair of Blood Artists and a Knight of Infamy to go with two lands. After a Timely Reinforcements pushed his life over 20 and filled his board with Soldiers, things were looking good.

Souza kept adding creatures to the board, beginning with a pair of Blood Artists—perfect allies against a token army. He followed that up with a Gravecrawler and Knight of Infamy, the whole time swinging with his Diregraf Ghoul while Papadatos swung with his Soldiers. As the board filled on Souza's side, Papadatos left his Soldiers home, with the life totals sitting at 16–13 in favor of the Brazilian.

Things took an interesting turn when Papadatos made a Geist of Saint Traft. After sitting idle for the obligatory turn, the Geist swung in to an untapped Diregraf Ghoul, which promptly shambled in the way. The Angel still got through, and a second Angel, this time a Restoration Angel, joined the fray as well, saving the Geist of Saint Traft from death. Papadatos was at 9 and Souza at 12.

Souza was seemingly out of gas, but he still had the reach of the Blood Artists to consider. He kept swinging constantly, whittling Papadatos ever lower. For his part, Papadatos continued to let them through. When the time was right, he struck, exiling one Blood Artist with a Celestial Purge and bouncing the other with a Vapor Snag. With the ability to attack unabated, Papadatos sent in all of his creatures that could either fly or happened to be under divine protection. With that one swing, Souza fell to 4, but it cost Papadatos his Geist of Saint Traft. After combat, Papadatos added his deck's namesake to the table, the first appearance for the Delver of Secrets in this match. With Souza at 4, the Delver of Secrets would prove to be lethal if it was able to flip on Papadatos's next turn. Souza tried to set up for the win, forcing through enough damage to drop Papadatos to 5 and giving him lethal on the next turn. 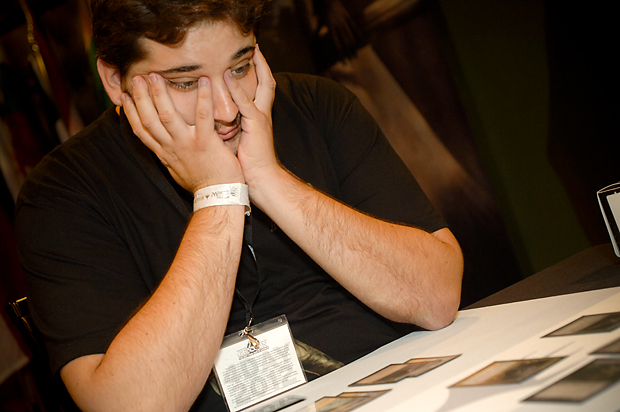 Fondas Papadatos contemplates how to even up the match.

Papadatos slowly rolled over the top card of his deck to reveal a Ponder, flipping the Insectile Aberration to show. He then sent his two fliers over, hoping that Souza was without removal. He was indeed, and Papadatos climbed back to even things up at one game apiece.

For the final game of the match, it was Souza's turn to mulligan on the play. His second hand was quite spectacular, it turned out. He made two consecutive Gravecrawlers and even had the Gut Shot for Papadatos's first-turn Delver of Secrets. Papadatos had some removal of his own, removing one of the Gravecrawlers with a Celestial Purge, but Souza had a Diregraf Ghoul to replace it. 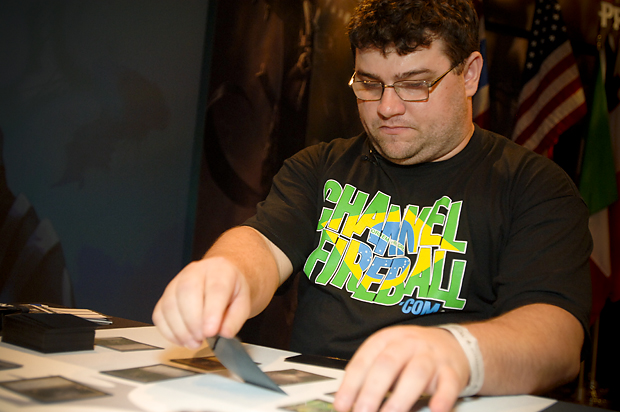 Juliano Souza jumps out to an early lead in Game 3.

Despite holding a clear advantage at this point, Souza's mulligan had him tapped. He was down to one card left in his hand, while Papadatos still had a mostly full grip. Souza's two creatures attacked, and Papadatos threatened to completely wrest control with a Celestial Purge on the last Gravecrawler, but Souza cleverly killed it with a Dismember, allowing him to replay it from his graveyard.

Papadatos upped the ante some with a Talrand, Sky Summoner on the next turn, but Souza was prepared. He played a Phyrexian Metamorph, clearly intent on copying the legend, but before the spell resolved Papadatos cast a Gut Shot to kill the Gravecrawler, getting himself a 2/2 Drake for his efforts. Souza once again replayed the Gravecrawler and continued to attack. When he attacked on the next turn, Papadatos made a Restoration Angel to block and kill the Diregraf Ghoul, getting the only non-Gravecrawler Zombie off the table.

Souza was facing a quick death at the hands of flying creatures, but he still tried to make something happen. He played a Mortarpod and a Blood Artist, hoping to be able to burn Papadatos out before he could attack for the win. Unfortunately, Papadatos had the Vapor Snag to prevent any shenanigans, coincidentally enough also dealing the point required to make sure that his next attack was lethal. Souza shook his hand and wished him luck.