"Be generous," Sam Stein implored his opponent as Gerard Fabiano reached over the table to fill in Sam's name on the feature match playmat.

Ignoring his opponent's pleas for leniency, Fabiano filled in "Sam Stains!" instead of the Pro Tour–Valencia Top 8ers actual name. "I knew you were going to do that!" said Stein. 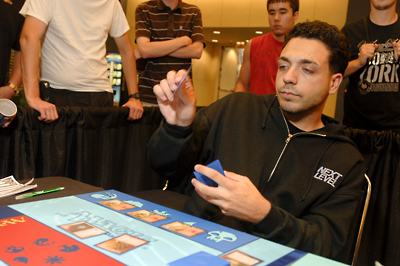 Gerard Fabiano has no mercy.Despite the shenanigans, the two amicably shook hands to begin the match. Fabiano jumped to an early lead in board position with a Scuzzback Scrapper and Battlegate Mimic, while Stein simply played Plains and Islands. He did manage a surprise Plumeveil on turn three, which munched on Fabiano's Scrapper. The totals stood 20-15 in Gerard's favor.

With a solid blocker in play, Stein looked to establish himself on the board by following up his now-3/3 defender with a Briarberry Cohort. That was enough to scare Fabiano away from the red zone temporarily, and he simply played a Horde of Boggarts, leaving him with that turn-two Battlegate Mimic and a Hearthfire Hobgoblin. When Sam played a Swans of Bryn Argoll, Fabiano had to stop the match to repeatedly read the card.

"Uh, it's in English," his opponent prompted.

Unfazed, Fabiano simply played a Giantbaiting, conspiring the sorcery and bashing his opponent with two Giants as well as his Horde of Boggarts. Things were looking good for Fabiano as his opponent dropped drastically in life total, and Gerard knocked off the Plumeveil while drawing a card in the process. A Steel of the Godhead on his Swans wasn't enough for Stein, as Fabiano revealed a second Giantbaiting and managed to swing for lethal damage despite a 6-point swing from his opponent the previous turn.

Fabiano agonized over keeping his hand for the second game. "I've got a one-lander here. Not lying." He told his opponent.

"Dude, don't keep it. I run SO bad against opponents who keep one-land hands." Stein implored.

Convinced he was fated to win, Fabiano kept the hand, then promptly hit a one-drop and two-drop as he drew a second land from the top of his deck. He did, however, miss his third land drop, indicating he may have been being completely honest with his opponent regarding the contents of his hand.

Stein didn't seem that fazed, though he missed his fourth land drop himself. He had managed a Plumeveil and a Somnomancer, which meant Gerard was forced to stay out of the combat zone. A main-phase Consign to Dream from Stein forced Fabiano to re-draw and re-play his Battlegate Mimic, missing yet another chance to hit a land. Stein showed no mercy by putting a Steel of the Godhead on his Somnomancer and swinging, leaving the totals at 16-10 in his favor. A Banishing Knack later from Las Vegas resident Stein, and Gerard scooped ‘em up for a shot at redemption in a rubber game.

Fabiano agonized over his third hand of the game, no doubt haunted by his exploits in the second game of the match. After finally opting to mulligan, Gerard peeled cards from the top of his deck. "Man, one land... two land... three land... four land... five land... SIX LAND... SEVEN LAND... WOW. I so would have won that." His six-card hand was a bit better, and he led off with a Scuzzback Scrapper and Tattermunge Witch. His opponent answered with a Shorecrasher Mimic. Sam Stein endures.The players' three-drops tried to outdo one another. Gerard started the contest by playing a Hearthfire Hobgoblin, but Stein kept right up with a Kitchen Finks. His mostly-white creature base looked troubled staring down the Sootwalkers Fabiano played on the fourth turn. He then followed that up by conspiring a Giantbaiting and all of a sudden Sam Stein looked to be in some trouble. He had a Snakeform to deal with his opponent's Sootwalkers, but still swallowed 8 damage from the Giant tokens. The totals stood 20-7 in Fabiano's favor.

Needing to do something fast, Stein opted to play a Steel of the Godhead on his Kitchen Finks, charging in to make the game 16-11, still in his opponent's favor but slightly less so. After combat he played a Mistmeadow Skulk, which looked to have the potential to cause problems for Fabiano. A veritable wall against Gerard's Hobgoblin and with lifelink to boot, Stein was certainly not going down without a fight. Of course, when Gerard tapped his team instead of attacking to conspire a second Giantbaiting, Stein could do nothing but fall to 3, though he regained 5 on his all-out attack the following turn before playing a Trip Noose.

Heartlash Cinder off the top for Gerard let him drop his opponent to just 1 life after Sam decided to tap Gerard's Hobgoblin on his opponent's upkeep with Trip Noose, but the game was still too close to call. Stein cluttered the board as best he could, but his Kitchen Finks with Steel of the Godhead was still blockable thanks to the fact the Ouphe didn't happen to be blue. A triple block from Fabiano to try to kill the green-white hybrid was nullified when Stein revealed an Unmake to KO one of the blockers, and all of a sudden Fabiano seemed locked down, left looking to the top of his deck trying to find an answer. Flame Jab wasn't enough, however, and Stein walked away with the match.