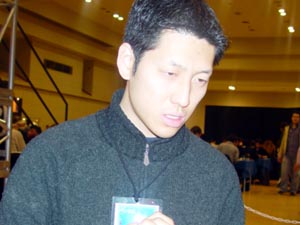 though there has been much speculation about who will be the first Japanese Pro Tour Champion, many forget that there are Japanese Masters Champions. Back in Venice, Katsuhiro Mori, Masahiko Morita and Masashiro Kuroda won the Team Masters event. As a result, Kuroda is a respected player in Japan, and with a 5-0 record thus far he's on his way to another major finish on his career resume.

Kuroda missed his third land drop and had to discard, while Reeves had tons of acceleration. A Talisman brought out Solemn Simulacrum, which led to Arc-Slogger. Kuroda killed the Simulacrum with Fireball, but wasn't too happy about it. Reeves added another monster to his side in Furnace Dragon, and Kuroda conceded.

I joked that Reeves seemed to be "McCarrell'ing" people out quite a bit.

"I am ninja cutting today. It's been working well, they take so many mulligans."

Both players had second turn Talismans, and Kuroda used Molten Rain to get ahead on mana. Reeves played another Talisman to keep pace, and Kuroda used another Molten Rain and Echoing Ruin to do some significant damage to Reeves' mana development. Reeves was stuck at three land, but Kuroda seemed to have no threats to take advantage of the situation. It appeared that Reeves would have a chance to come back, but Kuroda unloaded a ton of burn- Shrapnel Blast, Fireball, Pulse of the Forge and Barbed Lightning brought the match to a third game. 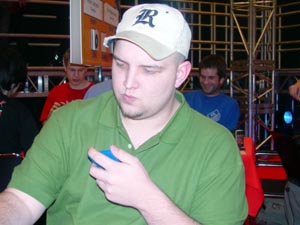 Once again, Kuroda and Reeves both had second turn Talismans. Viridian Shaman destroyed Kuroda's, and Molten Rain took out one of Reeves' mountains. The mana destruction war continued, as Echoing Ruin destroyed Reeves' Great Furnace, and he answered back with Oxidize and Detonate to take care of Kuroda's Talismans. Another Echoing Ruin destroyed Reeves' Tree of Tales, and Kuroda played Solemn Simulacrum to provide an answer to the Shaman that had been attacking. Reeves had the right solution in Arc-Slogger, but Kuroda used Fireball to kill it before Reeves could untap and use its special ability. He untapped and played another Slogger, this time with one mana free to kill the Simulacrum. There was a bit of an argument over whether or not Kuroda had forgotten to declare his intent to draw a card off the Simulacrum after it died since Reeves moved into his attack step, and the judge's ruling was that he was allowed to do so. Kuroda played his own Arc-Slogger, which Reeves' Slogger shot down. Kuroda shot the Shaman in response, and Reeves attacked with his Slogger to bring Kuroda down to six. Blinkmouth Nexus was able to block and kill it on the following turn with the help of Barbed Lightning, to Reeves' dismay. He summoned a Simulacrum, and didn't search up a land as he only had two cards left in his library. Shrapnel Blast dealt with that threat, and Reeves played Vulshok War Boar. Kuroda drew the Nexus he needed to chump block it and live for a turn, and with no cards left in his library Reeves conceded.