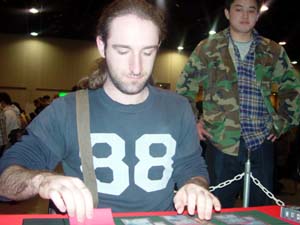 Sam Gomersall has seen more of Asia in the last few weeks than most foreigners will see in a lifetime. He came out for Pro Tour Kobe, spent two weeks in Hong Kong with a friend and played in the Grand Prix, then came here. After this weekend's event, he goes home only to play in another Grand Prix next week in England. That's a lot of traveling, and a lot of Magic. His opponent, Osamu Fujita, is the notorious "Silver Collector" who has a Magic career filled with great accomplishments, almost all of which involve coming in second in a major event. Not that most of us would mind a second place finish in a Pro Tour, Grand Prix or Nationals, but Fujita has made a habit out of it and is still searching for his championship.

Both players accelerated their mana on turn two; Gomersall with a Talisman, and Fujita with a Myr. Gomersall summoned Arcbound Crusher, and Fujita played Goblin War Wagon. Chromatic Sphere made the Crusher 3/3, and Pteron Ghost let it attack without any danger. The Wagon blocked, and the Ghost kept the Crusher alive. Fujita brought out a pair of Grimclaw Bats, and Gomersall played AEther Spellbomb to make his Crusher 4/4. Somber Hoverguard followed, giving him some resistance for the Bats. Gomersall played Wizard Replica and Fujita brought out Oxidda Golem, making the Crusher 6/6. It attacked and Fujita blocked with his whole team- Gomersall sacrificed the Sphere before damage to produce a red mana and Shattered the Golem. Gomersall only had plains and islands out, so Fujita naturally wasn't expecting an artifact destruction spell in combat and his reaction showed it. All his creatures died except for a Bat, and when Gomersall played a Vulshok Morningstar Fujita just laughed at the overkill. 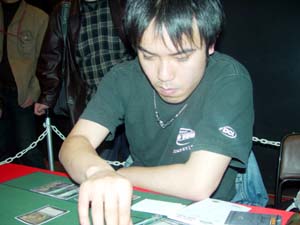 Fujita mulliganed his opening hand. Things got interesting quickly, as Gomersall used a Talisman to play a turn three Crusher once again, while Fujita had Sword of Fire and Ice. Drill-Skimmer threatened to take the Sword and do some real damage, and Gomersall played a Morningstar before attacking with the Crusher for three, and summoned Somber Hoverguard. Fujita attacked with the Skimmer, looking for a trade and getting it. Both creatures headed to the graveyard, and the judge reminded them that the Sword provides protection from blue. So, the Hoverguard died and the Skimmer got to stay around with the Sword. The game now went into race mode, as Gomersall played Neurok Spy and gave it the Morningstar so it wouldn't die to the Sword. Fujita played Arcbound Stinger, put some extra damage into play with Arcbound Hybrid, and played Disciple of the Vault on top of that. Fujita was now at thirteen, and Gomersall was at seven. Gomersall played Darksteel Gargoyle and attacked with his team, bringing Fujita down to three. The Gargoyle was a good answer for the Sword, but Fujita had Betrayal of Flesh in hand. It would deal with the Spy, but there was still the matter of the trampling Crusher. After a lot of thought, Fujita decided to play it safe and keep his entire team back. Chromatic Sphere made the Crusher 7/7, and Wizard Replica 8/8. The Replica meant that Fujita would have to cast the Betrayal in response, and thus he only got a Banish out of it and nothing more. From here, Gomersall was able to finish it.