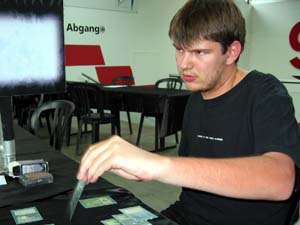 is what you get when you have a Grand Prix in your country: the best of the Europe beats a path to your doorstep to crush you round after round. Keim is hoping to stop former French National champion from stamping his passport for day two in this round.

They tied the die roll four times before Lauriol managed to win it.

The plucky young Swiss had to send his first hand back. His second wasn't pure gold, but he kept it. Sylvain played a second turn Chosen and Keim dropped Arcbound Ravager.

Tel-Jilad Justice ate up one of Fabian's lands and he played Disciple of the Vault along with Welding Jar. He apparently forgot about the Jar because he lost his Ravager to Viridian Shaman without blinking.

Out came Ornithopter and when Fabian gave it a Cranial Plating it was clear why he wasn't eager to lose the Jar. Sadly for the Swiss, Lauriol had Oxidize.

The green creatures attacked and Troll Astetic joined the fray. Soon Eternal Witness brought back Oxidize and Fabian Keim found himself in an unusual situation for a deck as fast as Affinity: chump-blocking to hold off his impending doom.

They took the time while shuffling up for Game 2 to listen to Gabriel Nassif's woes (while he was signing Tooth and Nails). And then Sylvain revealed he kept a one-land hand on the first game hoping the Oxidize and Tel-Jilad Justice would help him out. It sure worked out great for him.

Again, Fabian send his first hand back. But this time his second one had no lands as well. The third one was basically just lands (well, he had Thoughtcast). But he had to keep it.

Again Lauriol played turn two Chosen, turn three Tel-Jilad Justice and Oxidize. Disciple of the Vault and Myr Servitor showed up but it was too little too late.

Lauriol deck was built to blow up artifacts and without the initial push Keim had to pull some clever tricks to even the game. He played Somber Hoverguard. 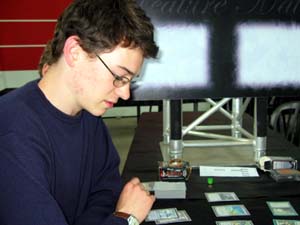 The French tapped out to play Molder Slug and the young Swiss smiled. He lost his Darksteel Citadel and had to play another one to keep Glimmervoid around. The Hoverguard did its best to keep the race close but Lauriol was in a rush. A second Eternal Witness gave him Tel-Jilad Justice again.

He sent his crew in and the Chosen traded with the Disciple. When Keim kept his Hoverguard back to block... the writing was on the wall.