oes your deck have a name?" asked Mori as he sat down at the table. Johan shook his head sadly. "My deck is named BabyStar." And you people think American deck names are seemingly random and unintelligible. Still, you have to give Katsuhiro Mori his due. He has been one of the world's top deck designers since Kamigawa Block Constructed, and he now has Legions of pros who wait with bated breath for him to deliver decklists before each Pro Tour. Mori's opponent this round is the inimitable Johan Sadeghpour. This Swedish clothes horse and Pro Tour-London Top 8 member is generally considered to be a Limited specialist, but he started the tournament 4-0 this weekend and feels he has an excellent deck for the tournament field.

Mori was particularly animated for this match, laughing, making funny gestures, and cheering frequently when his deck delivered a card into his hand. He won his World Championship on this ground, and today he was clearly feeling loose and confident.

"Jon Finkel, go," said Mori a few turns in, playing Shadowmage Infiltrator and snapping to indicate he was passing the turn to Johan.

Johan Wrathed (or is it Damned?) the Invitational winner away, and Mori followed with an Urza's Factory, a card he pointedly insisted was very good. Extirpate off of Mystical Teachings for Johan hit all of Mori's Teachings, making sure the Swede would win the long term flash battle but revealing a hand loaded with spells like Draining Whelk, Sudden Death, and Cancel for Mori. The control battle that was strangely filled with action at that point then devolved into "draw, go." Mori found his eighth land and looked to have Urza's Factory to rely on, but even that was taken away by Johan, forcing the game into a complete-but quickly played-stalemate. All the while, both players were loading up their storage lands with counter after counter.

That's where things got interesting. The game quickly switched to Factory-Worker beatdown (think of it as the Leninist revolution) on both sides of the board, while neither player really played any spells. Oh sure, Johan played a Sudden Death that he was going to discard to get himself one up on Mori, but there wasn't much blocking going on anymore, as both players kept taking the damage and working on their opponent's life total in return. Finally, Mori decided to try and win the card advantage battle on the back of Jonny Magic, running into Draining Whelk, hitting Cancel in response, which was Cancelled in return. Mori let the Cancels resolve and then Whelked Johan's Whelk, again meeting a Cancel, trumping that with Spell Burst plus buyback. The Spell Burst again met a Cancel, and this time everything resolved and Johan's Whelk was in play-but was killed by Sudden Death with its counters on the stack. The turn finally ended with Johan tutoring up a Teferi, Mage of Zhalfir, and then Mori attacking to make the life totals 10 each. Teferi turned the tide firmly in Johan's favor, though, and the badass Mage of Zhalfir plus some timely removal for Mori's blockers gave the Swede Game 1.

Johan sighed at the win, saying "These games are nice." Mori chuckled a little and agreed, though clearly both were being sarcastic. Nobody wants to face a test this tough on Day 1, and especially not against players of this caliber. 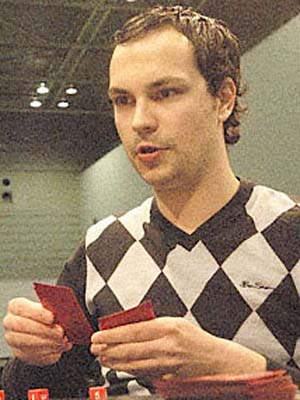 Game 2 kicked off quietly, with both players building mana until Mori suspended an Aeon Chronicler, only to see it disappear when Johan tutored for and played Pull from Eternity. This did leave Johan's Mystic Teachings open to Extirpate. Mori put a morph into play and then went beatdown via the morph, Teferi, and Shadowmage Infiltrator. Teferi died immediately to Sudden Death, but Johan was clearly under the gun. Brine Elemental locked Johan down for an extra turn, dropping him to 3 on the attack. Teferi followed that, and Johan could not find the help he needed to escape.

Sadeghpour Parised an opening seven that lacked the proper land requirement, finding a barely keepable six on the play. A third-turn Phyrexian Totem from Mori was a nasty early threat, while Johan caught up on cards with a suspended Chronicler, only to see it Whelked by Katsuhiro when it came into play, giving the former World Champ a 6/6 flier early. This was only made worse by the fact that Johan had a Sudden Death in his hand and was completely untapped, but lacked the second black mana to cast it with the Whelk counters on the stack. As they say in the biz, "Noooot winning."