Round 6: Alex Shvartsman vs. Tomi Walamies

The familiar face behind Sideboard Online's Week in Review, Alex Shvartsman has cruised through the Invitation thusfar, remaining undefeated. He's certainly doing YMG's red & black prouder than Dave Humpherys, who tanked to 2-3. His opponent is Punisher's Tomi "Jelly" Walamies, who is mired at 3-2. Shvartsman is playing his blue-green deck from Worlds, since it served him a 5-1 finish. Walamies is with a strange new green-black control deck.

Shvartsman's start of Rootwalla, Wild Mongrel was stunted by Smother, delaying his Arrogant Wurm a turn while he set up with Aquamoeba. Walamies readied a Pernicious Deed. He ate a bunch of pain to make sure he'd kill the Wurm as well. With his board reset, Shvartsman bounced back with Basking Rootwalla, sitting on Counterspell and Circular Logic. Walamies meanwhile drew every land in his deck, and eventually succumbed when Shvartsman hard-cast a Roar of the Wurm. 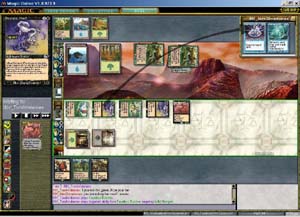 (click to open full-size in a new window)Walamies was all over Shvarstman in the second game. Mesmeric Fiend stole Counterspell while Phantom Centaur made with the clubbing. Shvartsman had a pair of Wild Mongrels, but Naturalize and a hand of land was not much good against another Fiend and a Butcher.

The state of the game became abundantly clear when Walamies was ready to Smother Shvartsman's Roar token, only to topdeck the superior Slay.

Despite a Walmies mulligan in the deciding game, he was soon in the driver's seat. Shvartsman had Careful Studied a Wonder into his yard and a Logic into his hand, but the rest of it was all land. Walamies had Mesmeric Fiend to make it downright embarassing. 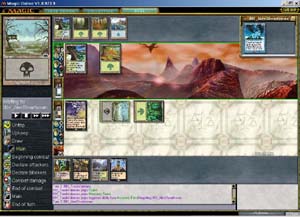 (click to open full-size in a new window)When he did draw a Basking Rootwalla to beat down, Walamies was already working his Phyrexian Arena. He made a Phantom Centaur, ready to race. Shvartsman truped with Wild Mongrel and a counter for the second Centaur. Walamies set him back with Pernicious Deed.

At eight life to Shvartsman's six he bashed with the Centaur. Shvartsman fell to one. Then he Wished up Faceless Butcher and Echoesed Shvartsman. He stopped the lethal attack by Lootering out Arrogant Wurm in response to a Deed clearing the way. It didn't matter. He was playing with half a deck, and a turn later it was over.