Round 6: Andrew Gordon vs. Kim Brebach 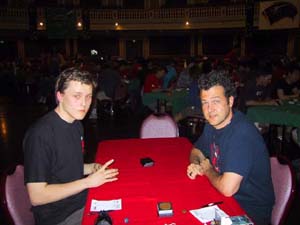 Round 6 saw the battle of the bridesmaids as Australian Nationals 2001 Runner-Up Andrew Gordon squared off against Australian Nationals 2000 Runner-Up Kim Brebach. Today's prize would be a ticket into day 2 of the Grand Prix as both players were precarious placed at 4-1, the loser would face an unknown opponent next round in a deathmatch scenario.

Andrew chose to draw, as all good players do - but it was he who had the first creature drop of this game with a Cartographer turn 3. Kim replied with an Ivy elemental for 3, which surprised me with the amount of land stall in his hand (at least 2). Each players manacurve kicked in with Andrew casting a Chainflinger, Kim a Rabid Elephant and then Andrew a Rabid Elephant of his own. They exchanged beats as the elephant has a design fault in the blocking department (i.e. It's too good not to attack with it almost every turn). When the dust settled Kim however had the upper hand, in the form of an Aven Fisher, which would win the race against the clock.. The Elemental on Kim's side kept Andrew from attacking with any thing more than the elephant, whilst Kim had been able to drop a Lithatog and had 3 attackers a turn. This was eventually nullified when Andrew dropped a Squirrel's Nest, giving him a speed bump each turn. 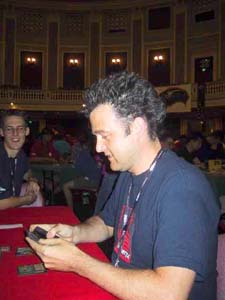 For 2 turns the game stalled, Kim on 12 and Andrew on 9. The deadlock was broken however as a second Chainflinger, this time on Kim's side of the table, finally a solution for those pesky squirrels! His jubilation was short lived however, as a Firebolt found it's mark. All this time Andrew had been on the back foot - not once in 5 turns had he the mana spare to use his Chainflinger. The elephants again were the key to the match and when Kim drew into his Acceptable Losses to remove Andrew's rabid friend - he elected to scoop as nothing was in hand to combat the Atog, Elephant and Chainflinger,

Game #2 again saw Andrew draw - the parallel drawn that their respective deck were very similar. It seemed however that Kims creatures were a little bit bigger, his burn a little more effective and the hair a little more wilder. That with the second turn Wild mongrel seemed to hint that Kim would smoothly head towards a comfortable win. There are many schools of thoughts on how to play against a mongrel - the best way however, is to try to run it into the ground. Andrew shared this thought, casting Flame Burst on the poor hound twice. Kim, the sensei of beatdown was more than happy to pitch cards to it.

This actually gave Andrew a 3-2 card advantage. Kim isn't one of the best limited players in Australia for nothing though as he had dropped a Dwarven Recruiter 3rd turn and by 5th turn had halved Andrews life. Andrews 3rd turn Cephalid Scout hadn't blocked as his ability was wanted for more cards, the Dreamwinder was the 4/3 tank that was to be used as a wall. Kim's Acceptable losses again reared it's ugly head as the only card in his hand was a mountain, and then again he served with the two 2/2's to really put him in striking distance. (6 life). 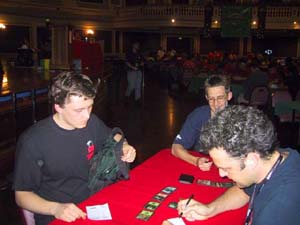 Who needs cards in hand? Kim doesn't, and it's very hard to argue when he keeps winning. Andrew dropped a Chainflinger but again it was pressed into blocking duties trading with Dwarven Recruiters. Now at only 4 life the best he could muster was a Seton's Desire on the scout, with only 1 card in Kim's hand it would probably at least trade. That last card however was an Elephant ambush - cast in Andrew's end step, and Kim was swinging with both creatures. The scout blocked the mongrel, which traded, as Kim was more than happy to pitch his last card (a land). Andrew drew from the scout and then in his draw step - but still no creature. Andrew conceded and Kim walks into Day 2 a round early.