Round 6: Andrew Lai vs. Ben Seck 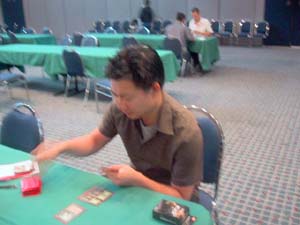 Ben Seck, currently sitting at 5-0, hopes to emulate his performance at Grand Prix Cape Town ast year and the next obstacle in his path is Adealaide's Andrew Lai. Andrew has consistantly been one of Australia's highest ranked player in the last 18 months, but although undefeated today is not confidant in his deck.

Ben (choosing to play first) opened with a Battlefield Medic which swings for an early point of damage, and follows with a morph creature. Andrew stalled at three lands, none os which produce black mana, dn is force early to settle for 2 morphed creatures of his own, one of which he trades for Seck's face down creature. Seck took to the sky in turns 4 &5 with a Gustcloak Skirmisher and an Ascendant Aven.

Finally finding the elusive 4th land (a Swamp even!), Lai fishes for 2 more with an Explosive Growth – but the damage is done as Seck swings for 5 bring Andrew to 10. Tapping out again to remove the Aven with a Pinpoint Avalanche is seems Andrew is fighting an uphill battle. Andrew swings with his remaining morphed creature to register some damage.

Seck sent the skirmisher and the medic in guns akimbo, sense the win in the next turn or two, but Andrew closed off the ground with a Wirewood Savage and a Birchlore Ranger. Seck knows he doesn't have to push too hard though building a stand off on the ground with another 2 morph creatures – then attacking 2 more times with the skirmisher and finishing the match off with a Chain of Plasma 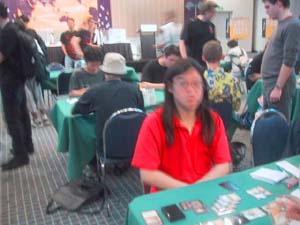 Lai is happy to play this time, opening with a swamp, cycling Barren Moors in the next two turns – this time after 3 turns he has one land out of each of his three main colours. To ease his mana issues further he had a Wirewood Elf and a Birchlore Ranger out as well giving him a fifth turn Treefolk Lorian. On the other side of the board Seck had stabilised with a morph and a Gustcloak Sentinel – although not big enough to take the Lorian down it gave Andrew something to think upon.

Lai found his sideboard trick in the Ascendant Aven, getting it into play with the help of the elves. While Ben built up an impressive army of face down creatures Andrew took a look at victory (a mere 14 life points away thanks to the Aven), and saw the Lorian, Aven, Glutonous Zombie, Snarling Undorak (face down) and his pair of elves would give him lethal damage. Tapping out for a Wave of Indifference, he attacked with everything except the Birchlore for a calculated 14.

Seck was ready for this however, morphing in 2 Gravel Slingers, pinging the Aven, Solar Blasting the Undorak and then to top it off, against all reasonable odds a further Chain of Plasma saved another 3 damage. Even the Zombie was impressed.

Decimated, Andrew was forced to go on the defensive waiting for an answer as Seck systematically pushed through for 3 damage at a time with a now face up Daru Lancer (effectively 5 first strike damage with the 2 Slingers). A grandstand finish ensued when Andrew's defenses had finally been whittled away – drawing an Erratic Explosion when on 1 life. Needing a Symbiotic Beast for the win he rolled the dice for one last time, coming up short with a Swat.