Round 6: Antoine Ruel vs. Olivier Ruel 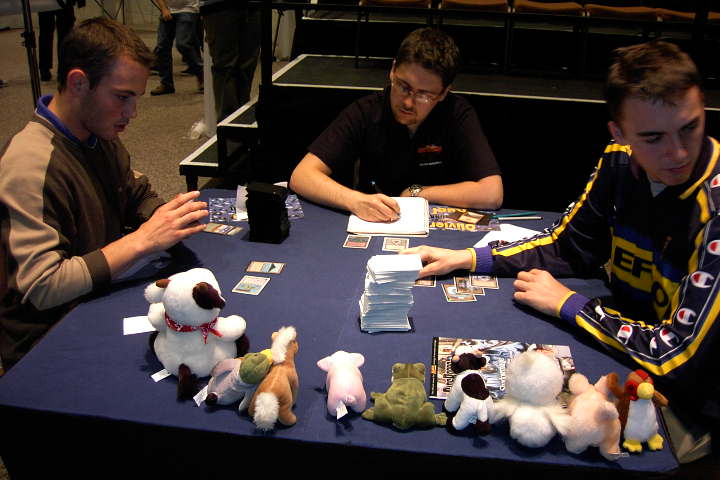 This brotherly pairing in the final round of the five color format was made possible by a last minute drop by Ryan Fuller, letting Olivier join his brother among the ranks of the finest. Not surprisingly, the brothers helped each other in preparing for the tournament, and as such had extremely similar decks. As a matter of fact, their five-color decks were only a few cards off from each other. Unlike many other contestants, the French duo chose to play an extremely redundant deck. The deck that they employed for the event had four copies of all the Ophidian variants including Flyingphid, FearPhid, and the OriginalPhid, four copies of all the Disk variants, including Powder Keg, Larry Niven's disk, and Pernicious Deed, and numerous counterspells. The Ruels had taken the Forbiddian archetype long known in the Magic community and expanded it to the requisite 250 cards. A mirror match of this type promised to be a lengthy affair and the brothers did not disappoint.

The ante of the first game saw Antoine's Dual land matched up against Olivier's Mox Sapphire. This fact would make it extremely important for Olivier to capture the first game to stand a chance in the match, since the value of the Mox could only be matched by it's brother Moxes and the Black Lotus. When Antoine windmilled his brother's Mox Sapphire onto the table, Olivier's motion-sensing stuffed animals took offense and began making a pretty large racket, especially for a bunch of stuffed animals. 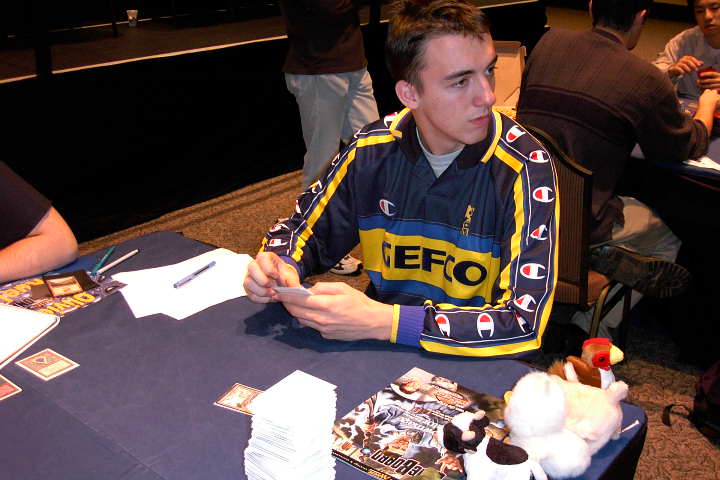 The first game proceeded in fairly typical fashion, with the brothers laying lands throughout, Thawing out more land, and alternately capturing Ophidian advantage for a few turns before the other found a Disk or a Wrath to blow it up to make way for his own Phid. The game became very interesting when Antoine cast Contract from below, only to ante a Time Walk. At this point, it seemed as though the winner of this first game would capture the match, since neither brother choose to put any copies of Jeweled Bird in their decks, a fairly uncommon choice among the invitational players. The first time Jon Finkel's new Ophidian variant was killed, Olivier protested to Jon that he had been killed and ought to do something about it. Eventually, after a war of Ophidians, Antoine began to garner a serious advantage with his Thawing Glacier/Deserted Temple combo. When there began to be a serious disparity between the hand sizes and land counts of the brothers, Olivier asked his brother to show him three good cards so he could concede, and Antoine did not disappoint.

Game two continued in typical control on control fashion, much like the first. The players took turns countering each other card advantage spells, and each continued sacking his library looking for Thawing Glaciers. Eventually, after Olivier got an important Contract from Below countered, it seemed as though Antoine had sealed up game two as well, but somehow Olivier ripped an excellent run of cards and was able to come back from a seeming grave. Olivier managed to clench game two. Unfortunately for him, he won a contract from below while his brother had already won a Mox Sapphire. 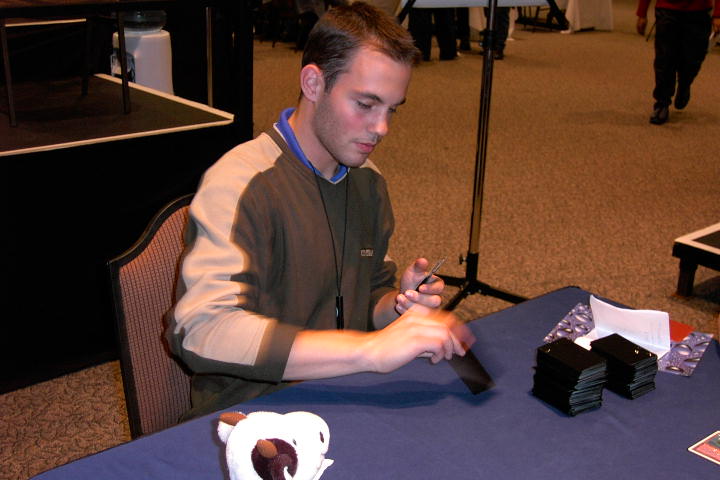 Going into game three, there were only 5 possible cards Antoine could ante to give his brother a shot at winning the match, assuming of course that Antoine would not be foolish enough to cast any ante cards if he is assured the match otherwise. But, when Olivier flipped over his Brother's ruby, the match got interesting again. Well, it would have been interesting had Olivier not stalled on lands. Olivier seemed ok when he went first turn Thawing Glaciers, but his brother had the Wasteland ready, and another Wasteland in reserve. Olivier soon conceded when Antoine proceeded to hit him several times with Ophidian, and Thaw in the meantime.