Round 6: Anything But a Flash

ith eight out of sixteen players opting for Blue-White-Red Flash in Standard, a mirror match was bound to happen sooner or later. As it turns out, when two Blue-White-Red Flash decks face off, the games tend to be long, taking place almost exclusively in the end-of-turn step, and the big questions are this: Who has the most lands, who can stick a big Sphinx's Revelation, and who manages to resolve their threats?

The burden of answering those questions was on Yuuya Watanabe and Shahar Shenhar. Shenhar, the youngest competitor at this World Championship, is one of the hottest talents in the game. At the age of 19, he has already racked up over 100 pro points. Today, sitting comfortably at a 4-1 record, he showed that he can compete with the best. Standing in his way is reigning World Champion Yuuya Watanabe, who is currently sitting at a 3-2 record.

As the game moved into the mid-game, no one really got anywhere: the players were just jockeying for position, burning each others creatures, and draining each others resources. To exemplify the pace of the game, Watanabe at some point resolved an Augur of Bolas, but Shenhar immediately flung two Pillar of Flame at it. It got a chuckle out of the players, laughing at how no one was progressing their board. 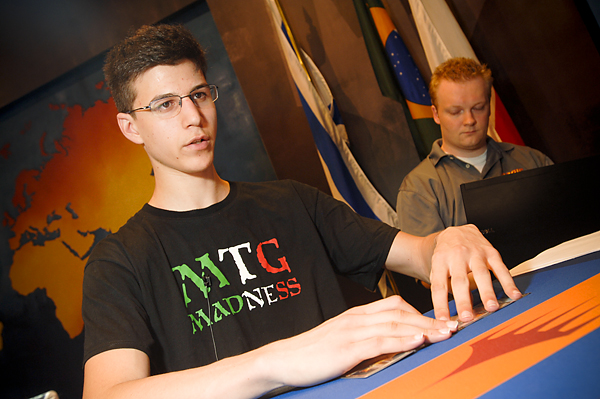 Shenhar looks for an opportunity to sneak through a Sphinx's Revelation.

Everyone was just saving for the main stage: the time at which the game progresses to the big Sphinx's Revelations. With double Sphinx's Revelation and Syncopate in hand and thirteen lands in play, Shenhar felt it was time to push the button. "At the end of your turn," Shenhar said as he readied his lands to make sure he kept up Syncopate mana to win a counter-war, "I'll cast Revelation for five." Watanabe simply let it resolve. It provided Shenhar with a good bit of card advantage, a Moorland Haunt that immediately started churning out tokens, and an Izzet Charm to counter Watanabe's Sphinx's Revelation on the next turn.

A while later, Shenhar resolved a Revelation for eight, and had the game in hand. After putting down Watanabe's life total into the single digits with Spirit tokens, Shenhar just showed a hand full of burn and took the first game.

After a lengthy, close, and hard-fought Game 1, the second game was a little anticlimactic. One of the most important elements of a control mirror match is lands, but Watanabe missed his fifth land drop for several turns in a row. Shenhar, in the meantime, was casting and flashing back Think Twice, which ensured that he was not missing any land drops. This meant that Shenhar was able to cast multiple spells per turn and win any counterwar that might ensue. 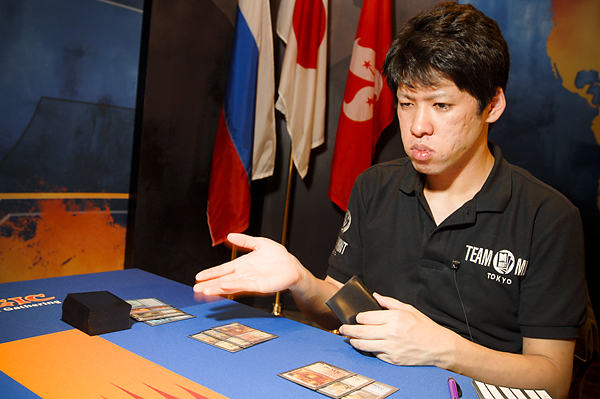 Watanabe feels the sting of missing land drops in the brutal control mirrors.

At some point, Shenhar missed a land drop as well. "Eight," he said, getting ready to discard. After pondering his options, he tossed out Negate. The players cracked up, getting a good laugh out of Shenhar discarding a card that they felt was such a big part of the matchup.

"Really?" Watanabe asked, after he finished laughing. "Yep," Shenhar replied. Watanabe shook his head, knowing that it could only mean one thing: Shenhar's hand was incredibly strong. Indeed it was: it contained multiple copies of Sphinx's Revelation and Syncopate, another Negate, Snapcaster Mage, and Dispel.

A couple turns later, Shenhar was attacking with an Augur of Bolas and Moorland Haunt-fueled Spirit tokens, and Watanabe was unable to answer them. Shenhar had multiple Thundermaw Hellkite in his hand, but never tapped out on his own turn, always leaving up mana to counter threats on Watanabe's turn. The discipline showcased by Shenhar was astounding. When Watanabe finally had to try something, Shenhar could counter it, and resolve a Warleader's Helix and a Dragon to close out the game.

"I think Blue-White-Red Flash is the best deck in Standard. It's good against Jund, it fits my style, and I am confident playing the mirror match," Shenhar said after the match. I then asked the players how they thought this matchup would play out, hoping to get more insight into the differences between their decklists.

"Yuuya is the control player in this matchup. I have to keep him in check and not have Ætherling come in play," Shenhar explained. But he felt that should be possible. "I have more Restoration Angels and Snapcaster Mages than him, so I effectively have access to more Sphinx's Revelation. This means that I can afford to Revelation for 4 while keeping up countermagic mana, and I can grind him out like that. Also, I have four Think Twice to his two, allowing me to hit land drops, which is crucially important. And Thundermaw Hellkite seems better than Ætherling, especially when there's no Cavern of Souls." Watanabe agreed. "I think your card choices gave you a good matchup," he said, as he wished his opponent good luck for tomorrow.