Hoaen is known in many circles as a Limited master. Ever since Pro Tour-Chicago (January 2003), where he finished in 22nd, he has finished in the top 16 of every single Limited Pro Tour. Add a Top 8 from Yokohama, and he has one of the most impressive Limited resumes of any player today. On top of that, he is currently 5-0 and hasn't lost a single game all day long. With a solid monoblack deck at his fingertips, it seemed like things were unlikely to change 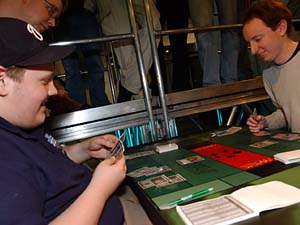 One player would be saddled with his first loss.

If there were one man to stop him Friday, though, it would be Eugene Harvey, former U.S. National Champion and one of the top players in the game. He's on a hot streak Friday with decks packed full of rares, from Undying Flames to Jugan, the Rising Star, to Umezawa's Jitte. He's also at 5-0 but doesn't quite have the perfect record; he's dropped two games thus far.

Good lucks were exchanged and Hoaen proceeded to put his deck on the wrong side of the feature mat. Eugene motioned for him to fix it. "Not a chance," grinned Hoaen. With Mark Rosewater (notorious for upholding feature-mat protocol) not around, it looked promising that he would get away with it.

Hoaen opened with Raving Oni-Slave and Eugene matched with Ishi-Ishi, Akki Crackshot. On his next turn he tapped three. "How lucky, a spell. Oh, [Kodama's] Reach. That's not a spell," said Hoaen, happy to still have a clear path. He summoned Akuta, Born of Ash and piled on the beats. 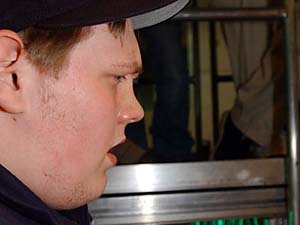 Hoaen loses himself in deep concentration.

Unfortunately for him, Spiraling Embers took down the Oni-Slave and an attack then knocked him to 10. At this point the game bogged down a little, with creatures being added and removed on both sides. Eventually Hoaen had a Kuro's Taken and Eugene simply had a Stampeding Serow with no other men to return. A fresh Kashi-Tribe Warriors (not quite the card you expect to see at the 5-0 table) was quickly Befouled.

Skullsnatcher Ninjutsu'd for 2 off of the Kuro's Taken and, when Hoaen re-summoned the Taken plus a Cruel Deceiver, Eugene was facing lethal damage and scooped.

"Your handwriting's pretty nice," noted Hoaen, staring at the place on the table where the players write their names.

"Thank you. Yours is pretty nice too. You can't even spell N," referring to an odd tail on the last letter of Rich's scrawled last name.

Gnarled Mass and Feral Deceiver started strong for Eugene. Hoaen proposed a trade with his Hired Muscle against the untapped Deceiver, but no takers. Swallowing Plague killed it instead. He marked his life total, and then went to pull the Muscle back from the red zone. He paused, noting that he hadn't yet added a counter, and looked up at Eugene.

Eugene shook his head. "Too late."

Kumano met a quick demise at the hands of Befoul. Eugene Communed with Nature into Sakura-Tribe Springcaller and Hoaen played out Skull Collector. Scaled Hulk was then Befouled, and Kami of Waning Moon gave the Hired Muscle a counter.

Eugene attacked with Springcaller and Gnarled Mass, Hoaen didn't block, and two Unchecked Growths ended the game in a hurry.

Eugene had first-turn Commune with Nature for…well, he missed. He followed it up with a second-turn Promised Kannushi. The hits continued as Hoaen played third-turn Skull Collector on his empty board and Eugene took the turn off to Kodama's Reach. 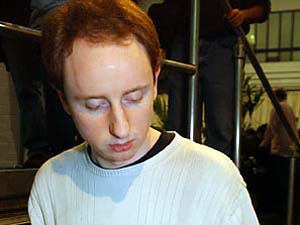 Eugenius tends to his meticulous graveyard.

Note that four spells have now been cast this game and the net result is a single 1/1. But these guys are 5-0, so I'll give them the benefit of the doubt.

They then decided to actually start playing, with Hired Muscle from Hoaen and Petalmane Baku and Gnarled Mass for Eugene.

At this point the match paused for a moment to listen to Jeroen Remie loudly complaining about Umezawa's Jitte from the stands. He had been mounting a comeback from an 0-2 start, was playing for day 2 and then lost a crucial match to the card.

"The worst thing about Jitte is that if they had made it in the last block it wouldn't even be that good," he complained.

"You know what the worst thing about Jitte is? It gives bad players an excuse to say why they lost," countered Osyp Lebedowicz, hanging out on the rail. Laughter ensued.

Meanwhile, Kumano from Eugene met Befoul yet again. He sent with the team in retaliation and Skull Collector stepped in front of Gnarled Mass. Unchecked Growth pushed through six damage.

Hoaen could only replay his Skull Collector, then watch as Undying Flames took down the Hired Muscle and put him back into the Collector lock. Not a good place to be when your opponent is doming you every turn, and that's what happened for a couple turns before Hoaen drew Akuta and gave it a Midnight Covenant with nine Swamps in play.

Eugene chumped with his Baku to stay at 20. The next Flames took Hoaen to 2, with the game looking like it was over, but Hoaen perked up when he drew his next card. He pumped his Akuta to 6/5, and attacked for 6, and then Swallowing Plagued it for 4 and climbed back up to 6 life, but then lost the Akuta on Eugene's turn.

His next draw was spicy as well, with Cruel Deceiver and another Midnight Covenant hitting the table, but Flames flipped over Kashi-Tribe Warriors and took him to 1. He couldn't quite deal 20 and ended up dying on Eugene's upkeep, losing a close race by just a turn.

Eugene stayed undefeated and Hoaen fell to a respectable 5-1 going into the third draft.