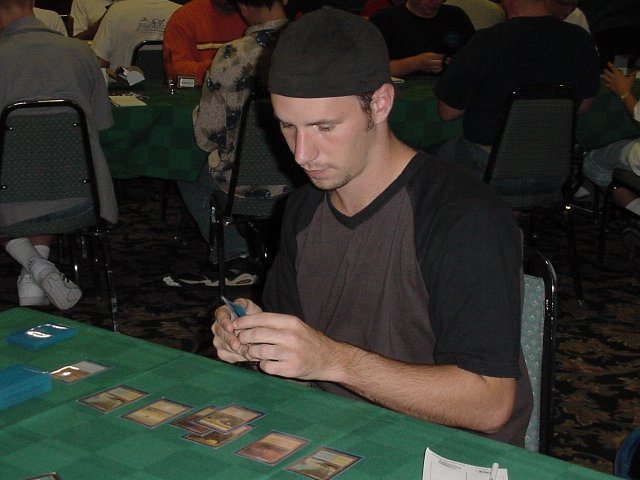 Bob "Mr. Extended", "The Great One" (and half a dozen other appellations) Maher Jr. vs. Ryan "I went 14-0 at Tokyo so there" Fuller shuffled up for a mirror match of sorts. While both were running the "good stuff" of Repulses, Prophetic Bolts and Urza's Rages, Maher was with R/U/W but lacked any creatures (unless you count Goblin Trenches or the pair of Lightning Angels in his sideboard). Fuller on the other hand was running the U/W/R beatdown deck packing a mix of Meddling Mages, Galina's Knights, Goblin Legionnaires and Lightning Angels, but no counter magic at all. After the match Fuller swore off the deck, so I'm guessing that the lack of counters may have been a problem, still the deck was fully capable of getting an explosive start and Maher only has 8 counters of his own.

Fuller and Maher have met twice before, once at Pro Tour New York where Fuller "owned" Maher, and again at the invitational where Maher was again defeated.

Both shuffled and cut each other's deck and started off with dueling Coastal Towers. Fuller came out of the blocks with a Meddling Mage naming "Exclude". Maher just calmly continued to play out lands and Opts. This brought a bit of banter between the two as Fuller wished for Maher to be more "greedy" since he kept the card he drew each time. The Mage was Repulsed during Fuller's next end step, but Fuller decided to win the card advantage war, Repulsing his own mage in response. Maher then cast a main phase Fact or Fiction, netting Urza's Rage and an Island over several Red lands). Fuller in desperation of a rapidly dissolving board position tossed a Prophetic Bolt to the dome. Maher then cast another Fact or Fiction, netting Goblin Trenches and Rage over Exclude, Opt and Land). Fuller drops a Meddling Mage on Absorb and tries to punch out a Lightning Angel, which meets an Exclude (the Mage gets Repulsed by Maher). During Fuller's end step, Maher creates 2 tokens with the trenches. Fuller responds by "Annihilating" one with a Repulse. Maher passes the turn. Fuller then "Slays" another token and tries to punch through a pair of Meddling Mages, which meet Exclude and Absorb respectively. Maher cranks out a pair of tokens. Fuller cast Flametongue Kavu to kill a token. It resolves and Maher casts Fact or Fiction, Fuller scoops up his cards before seeing even the 3rd card revealed (the first 2 were Absorb and Prophetic Bolt). 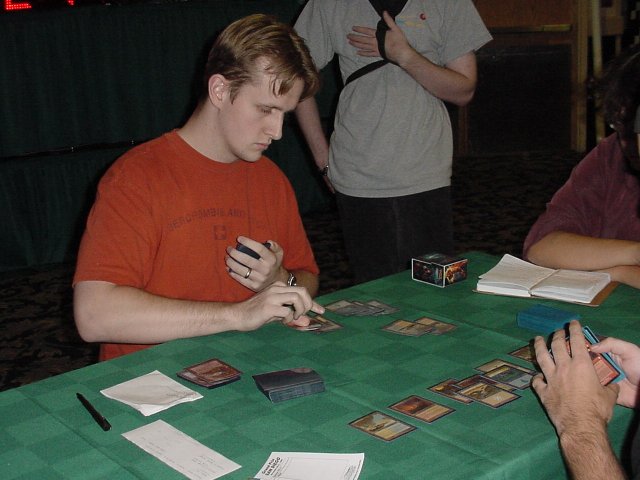 Fuller again plays first, this time busting out with a Legionnaire on the 2nd turn, an Ice tapping down one of Maher's Islands at the end of turn 3 and a Lightning Angel goes onto the stack, with a prayer from Fuller of "PLEASE no Gainsay", before Maher made his first play, that of... Gainsay on the Lightning Angel. It just seemed to be the way Fuller's day had been going. The goblin swings, and Fuller ends his turn. Maher clears it out with a Rage on the next turn while Fuller is tapped out, dodging another 2 points to his dome. Over the course of the next 7 turns is a game of draw-go that sees Maher cast 2 Fact or Fictions and never missing a land drop. Fuller misses very few as well, but while Maher is sitting comfortably on a full hand, Fuller is nursing his two cards like they were his own children. Due to a combination of damage from accumulated pain lands and Prophetic Bolts on both sides, Maher is at 6 life while Fuller is at 10. Maher kicks up an Urza's Rage to end the game and Fuller responds with a kicked Rage, or so he thought. Maher made him back and count up the lands, it turned out that Fuller was actually 1 mana short.

What was truly interesting about this match-up was that it looked as if Bob Maher had it in the bag from turn 5 on, it was actually a real nail biter for both. Maher moves on at 5-1 and with a draw should be in day 2, while Ryan Fuller will need a win and favorable tiebreakers to make the cut with his 4-2 record.