"You like the matchup?" Juza asked Hayne as he sat down to the table.

"No, just lost to it last round," Hayne replied with a sad shake of the head. 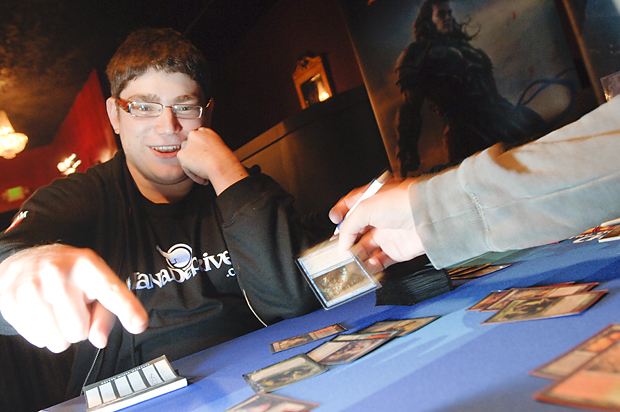 Despite how he felt about his odds in the matchup, Alexander Hayne still looked at the bright side of things.

After the obligatory opening banter, both players settled into critiquing comments about each others' card choices, each deftly defended. Like two master swordsmen toying with each other, the barbs were meant to draw blood, but not to kill. Most of this was punctuated by the evenly spaced, quite punctual "interesting" from Juza.

"This is an interesting hand," Juza commented after Hayne asked him how good his hand was. He showed me a Thoughtseize, Dark Confidant, Blood Crypt, and Stomping Ground. That was a lot of damage that Hayne wouldn't have to deal to him over the course of the game, but still a good hand. His Thoughtseize took a Delver of Secrets over a Serum Visions, Lightning Bolt, Grim Lavamancer, and Gitaxian Probe. With only one land in hand, Hayne joked, "I bet you wish that didn't say non-land," to which Juza emphatically nodded.

After sacrificing a Scalding Tarn to get a Steam Vents, Hayne played a Serum Visions, putting both cards on the bottom. This was important because when Juza played a Tarmogoyf on his next turn, the instant, sorcery, land, and creature in the graveyard made it a 4/5, out of Lightning Bolt range. To attend to this problem, Hayne added his Grim Lavamancer, intent on dealing the last two damage, but Juza used a Lightning Bolt to immediately fry it.

Juza was down to 12 from his own sources. When he cracked a fetch land to snag a Blood Crypt, Hayne politely asked him if he was going down to 9.

Instead, when Juza played his Bloodbraid Elf, it flipped over a Thoughtseize, which would drop him to a dangerous 9 against the Delver of Secrets deck. 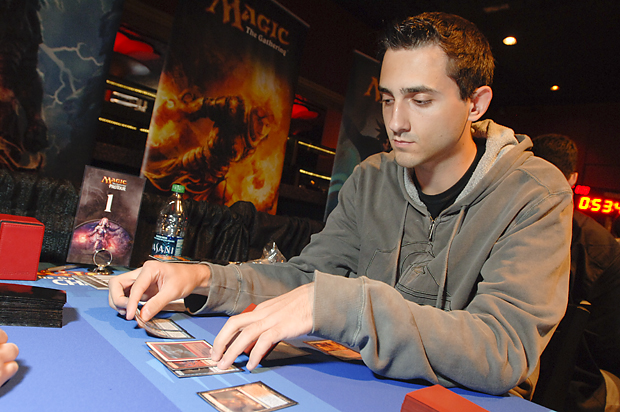 Martin Juza tackles some difficult decisions thanks to a risky Bloodbraid Elf.

"Interesting," he slowly remarked. Kind of the opposite of a Finks...then, after thinking about it for a minute or so, he decided to bite the bullet and play the Thoughtseize, to which Hayne responded with a Lightning Bolt, dropping Juza to a precarious 6. Hayne revealed his hand, losing a Snapcaster Mage out of a hand that didn't have any way to kill Juza at the moment. With that out of the way, and out of single Lightning Bolt range, Juza just attacked twice to take the first game of the match.

Hayne got to drive for the second game of the match, this time staying at his original seven cards. Juza's attempt at a Tarmogoyf was met by the narrow, yet perfectly positioned Spell Snare, but the second stuck, giving Juza a 3/4 body to begin attacking with, safely out of Lightning Bolt range.

And attack he did. Another fairly resilient attacker joined the team too, Juza's Kitchen Finks augmenting his life total as well as his board position. Hayne was floundering, already down a game. He made a Pithing Needle to stop Juza's Raging Ravine, but his lack of a third land was hurting him greatly. He had enough mana left to cast a Lightning Bolt to stop Juza's Finks for a turn, but not enough to cast his Threads of Disloyalty before Juza stripped it with an Inquisition of Kozilek. To add insult to injury, Hayne's next card was the Breeding Pool he would have needed to take Juza's Tarmogoyf.

Instead, the Goyf kept attacking. When Juza sent in his two attackers, Hayne made a Snapcaster Mage, giving flashback to his Lightning Bolt. Combined, the damage would be enough to finish the Goyf off, so Juza used Terminate to kill the Mage before it could block. Hayne sighed a little and used the Lightning Bolt to kill the Finks, dropping to 6 from the Goyf.

Again Hayne passed the turn. The Goyf dropped him to 1, and he seemed resigned to the end of the game. Juza followed the attack up with a second Goyf, making matters worse. When Hayne tapped out to cast Electrolyze, Juza had the window he needed to get around a Negate he knew Hayne to have, showing him the Lightning Bolt to finish him off.

1 Electrolyze 3 Huntmaster of the Fells 1 Firespout