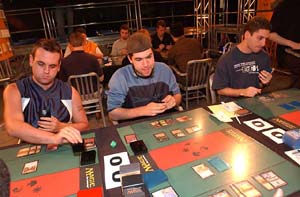 Poor 2020. They started their weekend off by getting squashed by Phoenix Foundation, and now they face most of their other nemeses from last year: Bob Maher and Neil Reeves. They've since ditched Gary Wise in favor of Dave Williams, and after a disastrous performance as Courtney's Men, they decided to switch it up and go with "Bottom Set." One of these two teams will not be competing tomorrow.

"You guys swept the die roll. That's quite an accomplishment. I'd say mathematically . . . impossible." -- Neil Reeves

Maher got a quality start against Wolfman. His curve of Herald, Savage and Wirewood Channeler was matched only by two morphs from Wolfman. His fourth turn brought with it a Wirewood Elf and a Krosan Tusker, drawing him a card. Wolfman tried not to be shaken by the overwhelming board presence.

Rood was likewise curving out, only with Elvish Warrior, Krosan Warchief, and Charging Slateback. Reeves played out a Gustcloak Harrier and a morph, then did nothing on five Plains. Rood obliged by attacking with Warchief and Slateback, losing his Slateback to Wing Shards. He bounced right back with Snarling Undorak.

Pollock was under heavy fire from Williams. His Karona's Zealot and Goblin Taskmaster fell to Goblin Turncoat and a cycled Gempalm Incinerator, and then an amplified Embalmed Brawler started beating down. Pollock made Ageless Sentinels, but Clutch of Undeath gave him an even bigger beater. Pollock had the Pacifism, but he was at just 5 life. He cycled Eternal Dragon and got his offense working with Gustcloak Skirmisher, Daru Warchief, and Sparksmith.

Wolfman was doing his best to blunt Maher's brutal opener. He flipped up Skinthinner to kill the Savage, setting up his Essence Fracture to buy more time. He took some pain, but then had Twisted Abomination holding the fort.

While he struggled, Rood's Undorak was nigh-unstoppable, and a Torrent of Fire gave the first game to 2020.

Another attack from Maher brought Wolfman to 4, but Echo Tracer let him reuse a Skinthinner, and Maher had lost Primal Boost, Wirewood Herald, and Treespring Lorian in the effort. He searched up a Timberwatch and played it, but Wolfman's other morph was an Aphetto Exterminator. He made a morph and sent it back with regeneration mana up. Maher swung all in. Wolfman declined to block, and Maher showed him Accelerated Mutation.

Meanwhile, Williams had dealt with most of Pollock's threats. That is, until Pollock regrew his Eternal Dragon and played it. Unfortunately, that was just what Williams was waiting for. Threaten dealt exactly 5 in the air.

Maher looked over and saw Pollock scooping up a pair of Sparksmiths.

"You won a game with two Sparksmiths on the other side of the board?!?!" -- Bob Maher 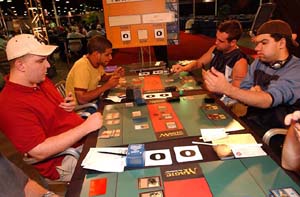 Wolfman got a quick advantage when his Zombie Cutthroat ambushed Maher's Elvish Warrior, but a Wirewood Elf got Maher a Gourna on the fourth turn, slowing the game down considerably.

Rood busted up an early Stinger from Reeves with Primal Boost on his Taunting Elf, then axed an Aven Redeemer with Torrent of Fire, but Reeves still had all those Soldiers. Catapult Squad, Coast Watcher, and others quickly got in the party. Rood build a group of his own, starting with Krosan Warchief and going all the way to Glowering Rogon. Wing Shards put things back to stalemate.

Pollock evened the score in his match when his Sparksmiths decided to show up in the early game. Williams did very little besides scoop up his cards.

Wolfman's mana flood soon became apparent. His Cutthroat fell to Accelerated Mutation, and then his plays were just Riptide Biologist and Deathmark Prelate. Maher continued a cavalcade of big men, and Wolfman was at 3 before his Weaver of Lies could surprise a Treespring Lorian. Maher made a replacement man, and Bottom Set took the first match. 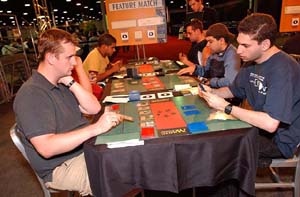 Pollock opened his third game with Glory Seeker and Zealous Inquisitor. Williams rallied with morph and Thoughtbound Primoc. Pollock swung all-out, and caught the Primoc with Piety Charm. He had no follow-up, however.

All this was just in time to see Rood alpha strike while at 7 life. Reeves blunted it as best he could, but it looked like he would certainly fall on the next turn. He untapped, swung in with two Soldiers, and pumped with Grassland Crusader and Piety Charm, stealing the win.

Williams hit for 2 and stayed on five mana. He flipped up Skirk Marauder to kill the Seeker when Pollock charged. Pollock replaced it with a morph. Williams kicked it into high gear, showing Sparksmith and a cycled Gempalm Incinerator to get rid of it.

Pollock did nothing. He Pacified Prowling Pangolin, but started taking beats when Clutch of Undeath got rid of the Zealot. With more men behind and Pollock sitting on a worthless hand, it wasn't long before Bottom Set had won the round, earning their berth in Day 2.