Round 6: Chris Benafel vs. Ben Rubin 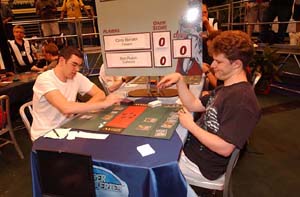 There is no doubt in the minds of Magic historians that Kai Budde and Jon Finkel are the two greatest players in the history of the game. Numbers don't like, and Finkeltron and the German Juggernaut are the two leaders on the lifetime winnings list. Ben Rubin is third. With two Masters titles under his belt, a Pro Tour final appearance and a Worlds finals finish, Rubin has done it all. However, he has never been on the United States National team. This weekend is his chance. In his way this round is Chris Benafel, who has made quite a bit of money himself since arriving on the Pro Tour scene a few years ago. He's looking for a second opportunity to represent his country at Worlds.

Benafel started off with Birds of Paradise, while Rubin had a first turn Careful Study. He discarded Deep Analysis, and a Basking Rootwalla hit play thanks to madness. Benafel brought out a pair of Llanowar Elves, but missed his second land drop. Rubin summoned Wild Mongrel, while Benafel cast Squirrel Nest. The Mongrel attacked and was pumped with a discarded Arrogant Wurm, which hit play. Benafel then got the second part of the combo out when he cast Opposition. Rubin untapped and cast Deep Analysis, and got through for three points of damage. Benafel was quickly building an army of squirrels to lock down Rubin, and summoned Merfolk Looter to help out a little bit more. Flametongue Kavu shot down Arrogant Wurm, which only really added insult to injury, as Rubin was already locked. 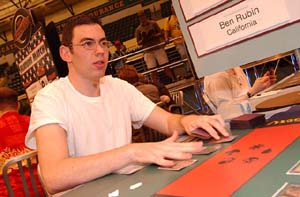 Benafel- (casts Call of the Herd) "Why are we still playing?"
Rubin- "So that I can know you have Call of the Herd in your deck. If you show me the rest of your deck I'll concede."
Benafel- "If I do that, will I get to look through your deck?"

No additional scouting was done, and Rubin conceded a few turns later.

Rubin cast a first turn Careful Study, discarding Counterspell and a madness Basking Rootwalla. Meanwhile, Benafel summoned Llanowar Elves. Rubin did not play a forest before attacking with the Rootwalla, offering a trade. Benafel did not bite, so Rubin played Centaur Garden and cast a Mongrel. Benafel cast Squirrel Nest, and taunted Rubin with "Come on Ben, let's see your Aura Graft!" Rubin jokingly responded with a gesture that must be left to the imagination on this wholesome, family oriented website. The Rootwalla and Mongrel attacked for three, and Rubin summoned Aquamoeba. Benafel summoned his own Mongrel. Rubin then cast Unnatural Selection, while Benafel brought out Merfolk Looter. Rubin nullified the Looter with Stupefying Touch. Benafel then cast a second Squirrel Nest.

Rubin untapped, and used Unnatural Selection to make Mongrels into Legends, and kill off Benafel's copy. Benafel then cast Static Orb, and Rubin thought for a while until he countered it with Circular Logic. Unnatural Selection made Benafel's squirrel army legendary, resulting in a rodent massacre. This cleared the way for Rubin's team, which came through for the win. 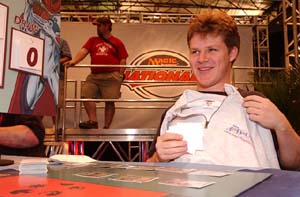 Rubin mulliganed his opening hand. He brought out a Merfolk Looter and missed his second land drop for a few turns. Meanwhile, Benafel was off to a great start with a third turn Squirrel Nest, and a fourth turn Flamtongue Kavu for the Looter. Rubin played two Careful Studies, and still couldn't find a third land. Benafel used Ice on Rubin's upkeep to slow him down even more. On the next turn Rubin finally found a green source and summoned Aquamoeba, but Benafel had Circular Logic. With such a poor start and a tremendous amount of tempo advantage lost, and an inevitable loss, Rubin conceded.