Round 6: Christian Lührs vs. Luca Chiera 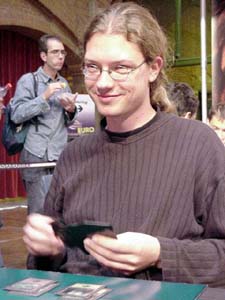 It started to get dark in Amsterdam and the weather got chillier by the minute.

Luca attacked and the Dwarf got blocked. He had a plan though: Sudden Strength on it and both creatures traded.

On his own turn, Christian cast a Stupefying Touch on a Barbarian Lunatic and summoned a Nantuko Tracer. Christian realized he was on the clock, when his opponent cast Dwarven Driller.

Lührs summoned a Soul Scourge, which got targeted by Flame Burst. Luca kept using his dwarf's ability. He followed it up with a fully cast Acorn Harvest.

When Chiera tried to pump up one of the tokens with the ability of his Ironshell Beetle it got Aether Bursted back to Luca's Hand. Not long after, the Italian manages to draw another Sudden Strength and finished off his opponent. 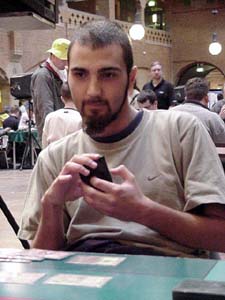 This time Lührs decided to play first because of the Italian's speedy deck.

Once again the Italian got a Dwarven Driller on the table and things looked grim for Lührs. Christian tried to stop the beatings from the Ember Beast with a Rabid Elephant. The Italian charged and left Christian at five life. Lührs tried to win the game and cast Guiltfeeder. During his opponent's next attack he went down to four and controlled no more creatures. After some moments he conceded.