Round 6: Christophe Haim vs. Chris Benafel 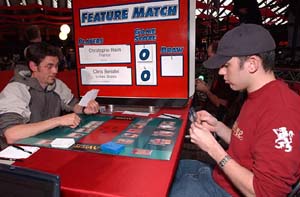 Christophe Haim is a Frenchman on a good run. He finished in the Top 8 at Pro Tour Osaka and has made the French National team with a third place finish at their nationals last week. Benafel is one of the best American players with numerous high Pro Tour and Grand Prix Finishes as well as good runs on the Masters both as an individual and part of the ABU team. Although mainly famous for coming second he has an individual win at Grand Prix Amsterdam to his credit.

Benafel is playing red-black while Haim has a blue-white deck splashing red for removal.

This is a critical match for both players as they are currently 3-2. The winner will be able to draw into day 2 while the loser is out.

Haim went first and immediately got the defences down with an Angelic Wall. He followed that with a Mystic Crusader – pretty good against an opponent who's just laid a swamp and mountain.

Benafel summoned a Cabal Torturer and then a Petravark to steal Haim's only island. It didn't look like he would be the beatdown player this game as Haim added a Patrol Hound to his side. Benafel added a Halberdier to his side to match. 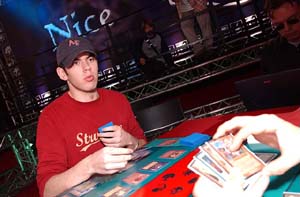 Haim still hadn't found a replacement island and it looked like Benafel might turn it around when he killed the Patrol Hound with a Flame Burst. A Whispering Shade with a lot of swamps put the Crusader on defensive duties and Benafel then took the initiative as he started to fly over with a Soul Scourge.

Auramancer and Mystic Familiar did not quite match the quality of Haim's earlier monsters. With threshold a mile off Haim felt it better to chump the Scourge for a turn with a Mystic Familiar. This made Benafel a little suspicious but he summoned a second Soul Scourge anyway.

Haim dropped a Ghostly Wings on the Auramancer. A nifty little play as he could then return the Auramancer and then recast it to get back the wings. Benafel still just turned his army sideways and traded more creatures to take more bites out of the Frenchman's life total.

The Auramancer returned just before a Sadistic Hypnotist showed up and sacrificed the Petravark to rip out the rest of Haim's hand. It became obvious what was missing for the Frenchman as a Chainflinger and Thermal Blast hit the graveyard.

An Aven Flock arrived to temporarily stem the bleeding but then Benafel summoned a few more monsters and was able to force through the final damage.

Mystic Crusader is good against red-black, but not without anything to back it up.

Haim made the unusual decision of making Benafel go first. It seemed to pay off as Benafel's first play was an Unhinge on turn 3. That netted half a card as Embolden hit the graveyard. He made up with a hasty Pardic Firecat the next turn.

Haim's draw was equally unexciting as an Auramancer was followed by a Pilgrim of Justice.

With a pro-red guy on the other side of the table the Firecat wasn't anything useful but Benafel found a use for it on an important 5th turn when he summoned a Sadistic Hypnotist. Benafel sacrificed both to gut Haim's hand. Haim pulled a Mystic Crusader to hope for a fight back but he was now down to 3 and Benafel made a Screams of the Damned.

Haim refused to give up. He put up an Angelic Wall for defence and attacked with everything to leave Benafel at 6 life. Haim still had the Embolden in his graveyard so could afford to let one Scourge through.

This plan was fine except Benafel had a Flame Burst in hand and that, combined with the Firecat in the graveyard, was enough to kill the Frenchman in response to him flashing back the Embolden.