Round 6: Controlling the Flow

match pits Pro Tour-Nagoya '05 champion Shu Komuro of Japan against Pro Tour-Venice '03 champion Osyp Lebedowicz of the United States. Shu is playing a four-color Gifts Ungiven/Greater Good deck, while Osyp is running a blue-red control deck that features the Urzatron land set. Both players are at the top of the standings at 5-0 and are already looking to set up a run at a spot in Sunday's Top 8.

Shu began this one with a mulligan. Pulling up his next six, it was Gifts, Gifts, Goryo's Vengeance, a dragon, and two land that produced the wrong colors of mana. A couple thoughts and a shake of the head and that hand went back too. The five-card version was much better, containing a good mix of land, acceleration, and a Gifts Ungiven to get things going. 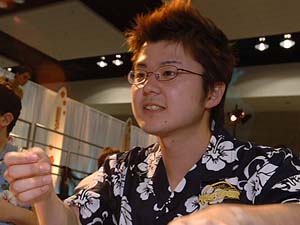 Komuro had to mulligan to five in Game 1

Shu's Farseek ran into Mana Leak, with Osyp perfectly happy to keep some pressure on his double-mulligan opponent, trading cards one-for-one to take advantage of the extra cards in his hand. Osyp played an Izzet Signet, then used his other two mana to Remand a Kodama's Reach, developing his own mana and slowing his opponent in the process. Meloku joined Osyp's team, which allowed Shu to finally get his mana established, but now he was facing one of the best finishers in the game.

The legend began swinging in and Shu made his move, casting a Gifts Ungiven at the end of Osyp's turn, which Osyp allowed. Wrath, Reclaim, Recollect, and Yosei were offered as choices, and Osyp decided to let Shu have the dragon and Recollect, putting as much pressure on Shu's mana as possible to allow Meloku enough time to put the game away.

Recollect went for Wrath, a seventh land was played, and Wrath cleared the table despite Osyp having some blue mana open. Osyp simply untapped and played another Meloku. Yosei joined Shu's team and again Osyp let it go, untapping and dropping out a Confiscate to steal the dragon. Osyp sent the team, showed his opponent a blaze that would be for more than enough to win, and it was time for Game 2.

Shu shook his head, gave a little smile, and quickly sent back the opening hand for this one as well. He began with two Sakura-Tribe Elders, but the second one ran into a Remand. The problem was on Osyp's side however, when the Remand failed to yield up land No. 3. Osyp pulled up the card from his draw phase and again whiffed, discarding and passing the turn. Fortunately for him his next turn found the badly needed land, which then allowed a Compulsive Research. He didn't find any more land in those three cards, discarding Keiga and an Izzet Signet. Shu had only an elder to punish Osyp for tapping out, having land troubles of his own. 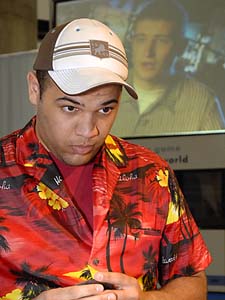 Osyp listens to his inner Finkel

Osyp found that fourth land, got an Izzet Signet into play along with the first part of his Urzatron, and finally got to start developing his mana while keeping up countermagic. Shu was stuck on four land once he used his Elder, so Osyp went for the beatdown plan, surprising Shu with a Giant Solifuge. Shu took the damage and used all his lands to cast Gifts, ending up with Yosei and Ink-Eyes in hand and Myojin of Night's Reach+Kokusho in the graveyard.

Mana number five hit for Shu along with a very threatening Greater Good, promising some frightening turns in the future if given the opportunity. Osyp spent some time on this one and opted for a swing with the Solifuge plus Confiscate on the Greater Good, putting Shu at a precarious 7 life.

Shu decided to play a Temple Garden (tapped) and pass the turn. Osyp again went into the think tank, weighing a number of options. In the end he decided to go with Giant Solifuge No. 2 and swung with both. Shu used Goryo's Vengeance to get out Kokusho and block one of the insects. He used his last three mana to attempt a Putrefy on the Kokusho once damage was on the stack so he could get the badly needed life swing from Kokusho going to the graveyard, but Osyp had the Mana Leak to put a stop to that nonsense.

With just one life, Shu untapped and drew his card. Stuck with a hand full of expensive creatures but no way to get one out without taking that fatal last damage, Shu thought a bit and then decided to cast a Cranial Extraction.

Osyp looked surprised as Shu went through his deck, and then he figured it out. "Oh! He just wants to go through my deck to let the others know what's in it!"

Shu smiled, finished browsing through the deck, and offered the concession. And just like that, Osyp was off to 6-0 and a commanding start.