Round 6: Dan Clegg vs. Terry Tsang 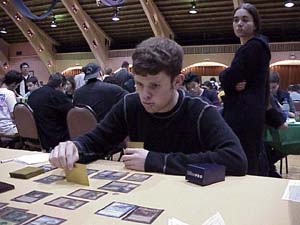 Dan Clegg All day, every time I've seen Terry Tsang, he'd tell me that his deck was awful. But, every time, his match record was up in the win column, with a goose egg in the loss column. How lucky can one Canadian get?

Dan Clegg had a very defensive G/W/b deck that included Kirtar's Wrath, Nomad Decoy, Hypochondria; well, there's a decklist below, why am I telling you?

The early part of Game 1 had Tsang getting out to a fast start, casting Mongrel on turn 3 and Centaur Chieftain the following turn. Clegg managed to clog the ground and with the help of Krosan Archer, stymied Tsang's Balshan Griffin as well. The game was a stall for a healthy amount of time until finally Tsang looked for his opening; at the end of Clegg's turn he cast Beast Attack and swung all of his guys. Some creatures died and Clegg dropped to 10. The Beast Attack was flashed back and Tsang turned them into the red zone again; this time Clegg dropping to just 2.

"Kirtar's Wrath or no?" Tsang asked Clegg. Dan answered that question by casting Kirtar's Wrath, cleaning the slate and putting two 1/1 flyers on his side of the board. The tokens weren't going to be alone for long, however, and were soon joined by Mystic Familiar, Dirty Wererat, Grave Gouger, and Gorilla Titan. Tsang drew land and finally, with one fell swoop, Clegg sent in the alpha strike and Tsang packed 'em.

Game 2 featured a transformative sideboard with Tsang putting his black in. This game was rather short, and while the ground stall appeared to eventually favor Clegg, Tsang got his Caustic Tar and Clegg could do nothing but wish his Hypochondria could stop it. Krosan Restorer hurried the win, as Caustic Tar, the new "shotgun" was reborn as a "double-barreled shotgun," killing Clegg in just two short turns. 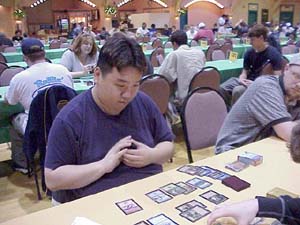 Terry TsangClegg forced Tsang to play first, hoping to stunt his mana as both of the decks were relatively slow. Instead, Clegg mulliganed, not once, but twice, and kept a hand with two land and three spells, including Ray of Distortion, Clegg's sideboard answer to the "shotgun."

While Tsang's early beats with Mongrel and Centaur Chieftain got in some damage, Clegg slowed the bleeding with a Teroh's Faithful, and appeared to be in the game. Creatures traded and died on both sides, and a Gorilla Titan came leaping forth from Dan's hand to put yet another halt on the Canadian Tsang's offense. This comfort was short-lived however, as Tsang dropped the Caustic Tar. Clegg took three, but cast the Ray of Distortion, only to see it get countered with a Rites of Refusal. Without two Plains, Clegg was forced to sacrifice his Bog Wreckage and flash back Odyssey's Disenchant. That one resolved, but took Clegg dangerously low on life.

The straw that finally broke the Invitational runner-up's back though was the Beast Attack. After flashing it back, Clegg, low on life, couldn't provide enough blockers for Tsang's whole team.