Round 6: Daniel Bryan vs. Mitch Towner 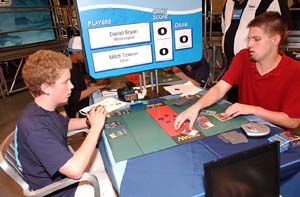 Daniel Bryan qualified through a JSS Challenge in Tacoma, WA. He's been playing Magic for about six years. "I just started playing tournament Magic this year though." Daniel decided he would play Black-Green Cemetery for this event.

An early Cabal Therapy from Daniel strikes the table turn one. "Lightning Rift," he guessed, and Mitch revealed his hand. Five land and a Slice and Dice hit the table, no Rift in his opening hand.

The Rift found its way into his hand quickly after the Therapy though, as Mitch played out both halves of the Astral Slide and Lightning Rift combo, on turns three and four respectively. The Rift and Slide on his side of the table are facing down against a quickly growing creature army though. The end of Daniel's turn though Mitch is able to send away a Mesmeric Fiend through the Slide and kill a Birds of Paradise with the Rift.

"Wrath of God," Mitch said on his turn following the Slide party. The only response that Daniel could come up with was a muttered, "It sure is."

Mitch appeared to be completely in control at this point. He put a morph creature on the table, even announced it as Exalted Angel, then used Astral Slide to remove the face down creature from play.

"Hold on," commented Daniel, "I've got a response." Daniel tapped two Forests and tried to cast Smother with them. The crowd groaned.

"You've got two forests there," Mitch pointed out to Daniel.

That pretty much summed up Game 1. Mitch played a quick and fluid game of Magic that appeared to throw Daniel off of his game.

Daniel even commented on the speed of the game during the shuffling process. "That was quick," he remarked while they shuffled up.

Mitch went about his sideboarding business quickly. Out came a Krosan Tusker and a single copy of Renewed Faith. In their places he added two Auramancers to the deck. 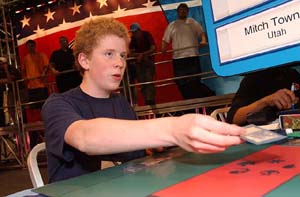 A little more deliberately Daniel made his sideboard decisions. Two copies of Bane of the Living, two copies of Smother and a single Chainer's Edict were all removed from his library. In their places he added two copies of Braids, Cabal Minion and three copies of Naturalize.

The first comments of the game came from Daniel. All he can muster up is a very lethargic "Ok," in response to a turn two Lightning Rift from Mitch. Living Wish for Gigapede did help the cause for Daniel two turns later though. The Gigapede joined the Oversold Cemetery that he played, getting him what appeared to be some time to develop his board a little.

Then Mitch untapped and announced "Wrath of God," with a little bit of a smile in his voice. The Gigapede may not die to Lightning Rift, but Wrath of God will kill it all the same.

Daniel scooped his Gigapede and his Birds of Paradise and moved them into the graveyard. He placed a Ravenous Baloth and a Mesmeric Fiend onto the table in their places.

"Swing," Daniel said during his next turn. The Baloth and the Fiend entered the Red Zone. Mitch was prepared though, sliding the Baloth out of play and hitting the Fiend with his Lightning Rift.

The match appeared to quickly come back to Mitch after this, as he played a second Astral Slide, following it up quickly with the third. Daniel kept playing creatures, two Baloths, Gigapede and Phantom Centaur all were on the table, but they just kept getting removed from the game by the Astral Slide, all except that Gigapede, he just can't be targeted. 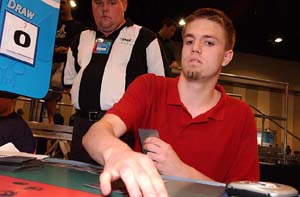 The three Astral Slide and two copies of Lightning Rift rout was on. Mitch had weighted the table so firmly to his own side by this point that there was little use in continuing. A Teroh's Faithful meant that he would remain alive into perpetuity. The Nantuko Monastery was keeping the Baloths at bay. The game was locked up, everything except the signing of the slips had been completed.

Daniel swung with his two Baloths and his Centaur. The Baloth ran into a Monastery, gaining four life for Daniel when first strike damage went on the stack. The Monastery of course lived right through all of this.

"Cabal Therapy," Daniel mused. Mitch could only shrug as the spell was cast. "Slice and Dice," Daniel guessed. The spell was a miss, but it revealed to everyone that was watching that Mitch held only a Mountain. Unable to slide the creatures out he was subjected to a beating from the Phantom Centaur.

The beating didn't last long. Mitch was able to slide out several creatures, including a Ravenous Baloth, then use Lightning Rift to finish off of his opponent. Daniel allowed the Slide activations to resolve, without sacrificing the Ravenous Baloth, and offered his hand. The game had ended because he forgot to sacrifice the Ravenous Baloth.