Round 6: Daniel Zink vs. Kamiel Cornelissen

Kamiel Cornelissen is the highly successful Dutchman who finally broke his run of just missing out with his first title in Grand Prix-Heidelberg. Before then he'd managed back-to-back second place finishes at Pro Tour-Chicago 2000 and Los Angeles 2001. Daniel Zink is the current German champion and made top 8 and last year's European Championships.

The game started slow until Cornelissen bust out an Aven Flock on turn 4 through the help of a Krosan Restorer and followed it with a Soul Scourge. Zink matched it with a Dirty Wererat and Aven Windreader.

The Restorer had given Cornelissen enough acceleration to leave him in the beat down position and a Frightcrawler and Acorn Harvest reinforced this. A Dreamwinder from Zink couldn't claw back the tempo, especially when Cornelissen removed his Windreader with a Patriarch's Desire after it had blocked the Aven Flock.

A Crippling Fatigue on the Soul Scourge left Zink just the Flock and a Springing Tiger to worry about. With Laquatus Champion and other goodies in hand he could potentially turn the game right around if he found an answer to the Flock.

Cornelissen cast Skeletal Scrying in response to Zink's Mesmeric Fiend but it didn't reveal anything more exciting than a Moment's Peace and Gravegouger. 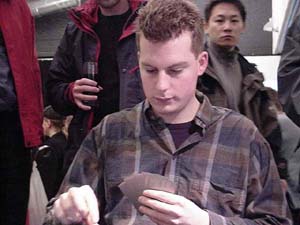 Kamiel Cornelissen Frustratingly, Zink couldn't find a sixth land, even with a Looter, but it did allow him to discard an otherwise useless Llawan, Cephalid Empress.

Finally it turned up leaving Zink with a number of options. He chose to remove the Gravegouger with Morbid Hunger to get his life total back up to a safer looking eight. This gave him threshold so in went the Wererat only to vanish from the game with Second Thoughts.

Cornelissen had drawn Narcissism though and had enough cards in hands and enough creatures on the table to run through for the game.

Zink made Cornelissen go first and removed his first creature, a Cabal Torturer, with Crippling Fatigue before summoning his own. This and the flashed back Fatigue then took down the Flock that had been so annoying in game 1.

Zink looked much better in this game as he made Compulsion. His Aven Windreader was removed by Second Thoughts but the Whispering Shade that followed it was more than capable of racing Cornelissen's Soul Scourge.

Cornelissen looked for an answer with Skeletal Scrying but a Hallowed Healer was just a plaything for the Torturer. He summoned a few monsters but even though a Stone-Tongue Basilisk looked quite impressive, it couldn't deal with Zink's swamp-walking Shade. 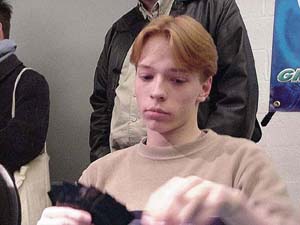 Daniel ZinkThis one was over far more quickly. Like Zink, Cornelissen chose to draw first only to regret it as Zink came racing out of the blocks. A turn 3 Skywing Aven was followed by turn 4 Whispering Shade and then a turn 5 Aven Windreader.

Cornelissen tried to match it with a turn 4 Springing Tiger and turn 5 Soul Scourge but was severely behind the clock. Scourge traded with Windreader and a Patriarch's Desire took down the Shade in an attempt to stem the bleeding. Zink wasn't about to let up as a Psychatog joined the frenzy.

Zink wanted a quick kill though and when cycling an Obsessive Search off the 'tog revealed a Syncopate he got the green light to throw everything to the 'tog and end the match right there.