Round 6: Darwin Kastle vs. Eugene Harvey 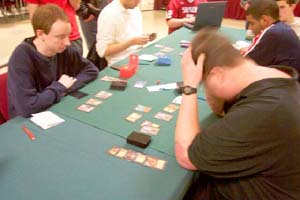 Your Move Games' Darwin Kastle, fresh off his top four finish at PT Houston, came to play in New Orleans with the deck that did him well in November: The Rock. GP Atlanta Champion Eugene Harvey also went with The Rock in Houston, but his top 64 finish wasn't enough to satisfy his competitive urges for here he decided to change sides to Psychatog. While both players seemed calm and collected as the match began, I've been told on good authority by several players that Mr. Harvey has been living quite the life the past few days in the streets of the French Quarter. Would this affect his game?

Eugene won the die roll and led with an Island. He followed this with a second Island, while Darwin cast Vampiric Tutor to fetch Duress. On his second turn, the YMG player completely destroyed Harvey. First, he cast Duress, which revealed two Intuitions, a Psychatog, Fact or Fiction, Upheaval, and a Swamp. Darwin knocked the FoF out of Harvey's hand. He then very stoically and properly cast Cabal Therapy, waiting for Eugene to okay the resolve before naming Intuition. This left Harvey with only the Tog, an Upheaval, and a Swamp in hand, with two Islands on board.

Harvey attempted to get things going by playing the toothy monster on his following turn, but it died to Diabolic Edict. Woe unto Eugene, as Darwin drew another Duress. Eugene burned the Cunning Wish in his hand to grab Coffin Purge from the Sideboard, but Darwin still stripped the Upheaval from hand. Yavimaya Elder hit the board and began swinging, joined by a Bird of Paradise.

Both players drew their cards meticulously and showed no sign of emotion to betray their hands. Darwin sat with multiple lands he had drawn, while kept playing out the lands that were endlessly coming off the top of his deck. Finally, Darwin drew a third Duress, took Coffin Purge out of Eugene's hand, and safely played Ravenous Baloth. Eugene found a second Psychatog which ate the Elder. In return, the Elder found a Diabolic Edict to eat the tog.

The Baloth kept on swinging, and since Eugene was forced to scoop. 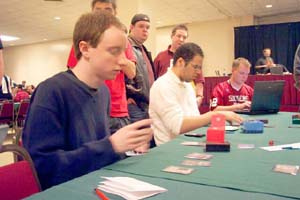 Darwin (whose side of the table I was able to view more readily) kept a hand with double Deed, Diabolic Edict, Llanowar Wastes, Dust Bowl, Volrath's Stronghold, and Yavimaya Elder. Before he could even take his first turn, Eugene gigged the Edict via Duress. Darwin drew...and found a Duress of his own, taking out one of a pair of Counterspell from the CMU player's hand. A turn later, he lacked a second Forest, so Kastle attempted to Vampiric Tutor, but that was countered. Darwin drew his Forest anyhow (Darwin: "That's the card I would have tutored for anyway"), and attempted to cast a third turn Elder, but Eugene had drawn a Force Spike over the past turn, which caught Darwin unawares.

The game quickly went downhill for the big man. Eugene began using the Brainstorm/Polluted Delta engine to set up a ridiculous hand, and faced no pressure from a slightly mana-stopped Darwin. Within turns, he had cast Intuition, two Accumulated Knowledge (the first for one card, the second for four), a Deep Analysis (hard cast and flashed back), and Duress. Confident that Darwin had no tricks in hand after the Duress, Eugene cast a 10th turn Upheaval, with enough mana floating to drop Psychatog on an empty board. Darwin managed to chump block a couple of turns with his Birds of Paradise, but in the end the math was elementary and the blue/black monster came across for lethal damage.

By the start of Game 3, there were only fifteen minutes left on the clock. Darwin started out quickly with a pair of Birds of Paradise, but had nothing to go with them except a sole Yavimaya Elder. By contrast, Eugene cast back-to-back Fact or Fictions, first netting Counterspell + Counterspell (while sending Accumulated Knowledge and Deep Analysis to the grave), and then being given Polluted Delta/Island/Accumulated Knowledge (sending a second Knowledge to the graveyard along with a Psychatog). Unfortunately, Eugene missed a couple of turns of land drops, and Darwin had found his sole Volrath's Stronghold to begin drawing three cards a turn with his Elder. 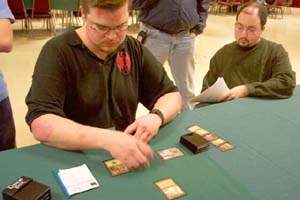 The game kept getting uglier and uglier. Harvey burned through his deck four cards at a time between Brainstorm, Polluted Delta, Accumulated Knowledge and Deep Analysis, but could not find a threat to kill Darwin. Darwin kept sacrificing his Elder, but amazingly drew land after land off his 'third' Elder card for many consecutive turns. On the tenth turn of the game, time ran out and the two men went into extra turns. On the first extra turn, Darwin's hand consisted of Duress, Haunting Echoes, Diabolic Edict, and a bajillion lands. He cast the Duress, and Eugene took a good ten minutes to decide how to respond. Eventually, he cast Cunning Wish to get Mana Short, cast Mana Short to tap Darwin out (except for two Birds of Paradise), sacrificed Polluted Delta to get a Swamp, used the Swamp to cast Vampiric Tutor, and put Upheaval on top of his deck. Duress finally resolved, showing Counterspell x2, Thwart (which was taken), Polluted Delta and Psychatog.

On the following turn, Eugene went for the win: Upheaval plus Psychatog. Darwin wisely floated two black mana with his Birds, and was able to Edict the atog once it reached the table. With the life totals reading 18-10 in Darwin's favor, nothing on the board, and only three turns left to play, the game pretty much ended as a draw (although Darwin insisted on playing it out to fruition).