Round 6: Dave Williams versus Ben Stark 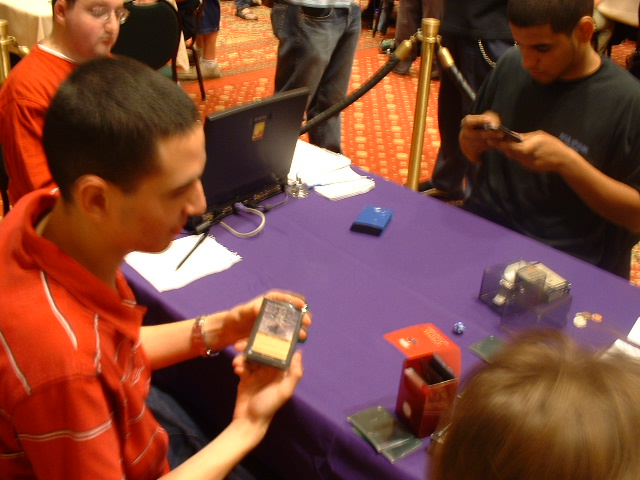 Rising star Ben Stark called himself the ‘poor, poor sap who has to play against double Visara.dec’. He modestly claimed this even though he finished tenth GP Detroit and thirty-third at PT Houston. Dave Williams, the recipient of mucho de la Visara, needs no introduction as the man who came off a year long ban to rise back into the top ranks of pro tour players.

Visara in the card pool outnumbered players in this match by three to two. It would be interesting to see how much the legendary status of the Dreadful one would affect the match after game one.

Dave Williams won the die roll and chose to play. He rolled his neck around and waited for Ben to decide whether or not to keep. Once Stark did, he Williams immediately dropped down Festering Goblin. Ben killed it on the attack phase by putting a 1/1 insect into play via Vitality Charm. Stark then beat down with Wellwisher, using Shock to clear out a Venomspout Brackus.

Dave went turbo mono-black with five swamps, two face down creatures, and an oversold Cemetary. By contrast, Stark stalled on three lands (a Plains, a Forest and a Mountain), and traded a Skirk Commando for a Snarling Undorak (both still face down). This left Williams with three creatures in graveyard, and one card in hand after he used Smother to kill Stark’s last morph creature. Stark went nuts by playing Wirewood Herald and Wellwisher, allowing him to gain six life a turn. He attacked the Herald into Dave’s still unrevealed morph creature, tutoring for Wirewood Savage, but casting Snarling Undorak before the attack (which he immediately realized as a mistake). 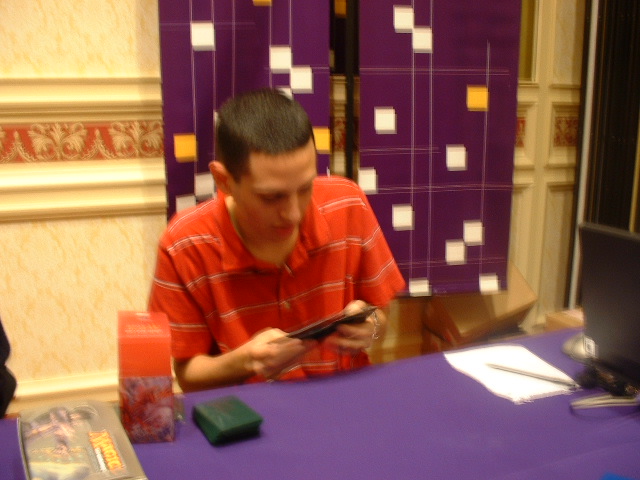 Dave summoned Screeching Buzzard, which was Pacified. The morph creature (Brackus #2) chumped the Undorak, and Dave brought back his Festering Goblin. He didn’t need to cast it that turn, as he drew a sixth land and brought out Visara. Ben sighed, played his
Savage, and passed the turn. Dave spent his next turn cycling Barkhide Mauler, and casting Festering Goblin and Nantuko Husk. This allowed him to constantly cycle card drawing (the Mauler) or creature kill (the Festering Goblin) via his Oversold Cemetary. It didn’t matter.

“I have no way to deal with Visara”, said Stark. “Even though I’m at thirty-four life, let’s just go to the next game.”

Dave: “Every single one of my opponents has had Visara so far. I’ve played three straight rounds of facing Visara, and one of my opponents even had Oversold Cemetary too. But I have two Visara and they only have one, so I keep getting mine out first. This has got to be ironic. Everyone around me registering their decks had Visara.”
Me: “Ironic is a diabetic getting run over by an insulin truck.”
Ben Stark: “You can’t complain about getting two of the best creature in the format in your deck.”
Dave: “Some people say that Rorix is better. I think he’s better in draft, since you can build your deck to be a lot faster.”

Between games, Ben sided out his white to add black and Visara to his deck. 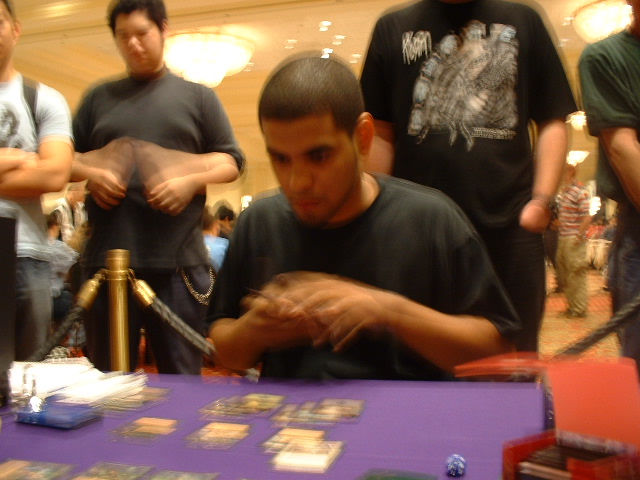 ”Come on, show me the woman!” he exclaimed.

“That’s not what I wanted to see. I guess I’ll take the Buzzard.”

This allowed Dave to cycle into his second Brackus, which began beating down. Ben had to trade Wellwisher plus Shepherd of Rot plus Solar Blast to kill the Brackus, but faced down Festering Goblin, Severed Legion and Symbiotic Elf with nothing on the board.

Ben drew, and played a morph creature. Dave drew, and played the only card in his hand: Smother. Ben stood at a precarious six life, and would have lost-if he didn’t have exactly three mana to morph his Snarling Undorak. Dave still attacked with his team, killing his Festering Goblin but leaving the Legion and the Elf on the board. Ben, now at two life, killed the Legion with Shock and began mounting a comeback. He swung with the beast, knocking Dave to seventeen, and then played a Symbiotic Elf of his own. The elves traded, but Ben put on more pressure with Leery Fogbeast, allowing him to continue the pressure with his Snarling Undorak.

With the life totals at eleven to two, Dave peeled Visara. Ben drew, and pondered his turn for a good few minutes. Finally, he cast Wave of Indifference to allow his team to attack for ten, making the final life totals negative three to one. But that one is all Dave needed to stay alive for the win.

After the match, Dave Williams recalled that only two of his opponents had Visara today, but one had Visara yesterday in the Grand Prix trial. He just wanted to set the record straight.