Round 6: David Humpherys vs. Nicolas Olivieri 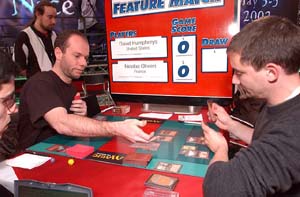 Both have eight points heading into this round. David Humpherys is both known for being a part of team YMG and being outrun by glaciers while he playing. That means that although he gets full marks for deckbuilding, playing skills and sportsmanship he isn´t exactly the most enjoyable player to watch.

Nicolas Olivieri is one of the top players in France, which is a very good thing to be if you considered the way they have been ripping apart the Pro Tour scene recently.

The French opened with Diligent Farmhand and Twigwalker while David Peeked to see two Red cards, including Fiery Temper. Soon the game had slowed down to Humpherys´ pace: blistering... slow.

He woke up to use Cackling Club to kill the Farmhand while Olivieri was tapped out but the French found an extra creature right at the top of his deck: Possessed Barbarian.

The American followed that with Dreamwinder and Petravark stealing a Mountain. All this Nicolas ignored with confidence swinging with his Barbarian and playing a Wild Mongrel.

Reaching six mana Humpherys finally got rid of the Barbarian with a Liquid Fire. The French returned the favour with Temper, discarded through the Mongrel, killing out the Dreamwinder. He then sent out the hound into the Red Zone with enough cards in hand, along with the Twigwalker, to finish the game.

Obviously Humpherys was forced to chump with Petravark. Continuing with his "expensive direct damage spells" theme the American threw a Kamahl´s Sledge at the Mongrel but Olivieri threw away his whole hand to save the beatdown hound.

He then topdecked once again, this time getting a Basking Rootwalla. Once again Humpherys was in major trouble, and at only five life points. David played Petravark and Pardic Firecat. The French sent the whole team in once again losing the Twigwalker but getting rid of Humpherys´ blockers.

A Repel delayed the final blow one more turn dropping David to three. An Anarchist brought back Liquid Fire and for a second it seemed David could balance the game.

But Nicolas Olivieri could smell victory and he played Pardic Firecat, attaking along with Wild Mongrel and discarding Basking Rootwalla to give David Humpherys more problems than he could handle.

Again Diligent Farmhand was the first to arrive. He even stepped into the Red Zone before wandering of to find a Forest. Humpherys stole a Mountain with Petravark but not before Olivieri dropped Elephant Ambush.

The token strolled around the Red Zone while the American decided he wanted to steal another Mountain with a second Petravark. To get around the double Petravark barrier Olivieri played Possessed Barbarian followed by a second Farmhand.

A third - yup, a third one - Petravark finally deprived Olivieri of any red mana. Still the French sent everyone, even the Farmhand, into the Red Zone. David agonized over his three Petravarks but eventually decided to throw them all in front of the elephant token. 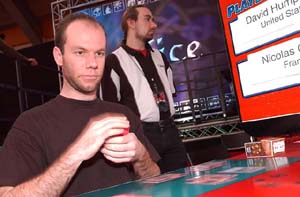 A Rites of Initiation gave the token enough power to bring down two land grabbers and dropped Humpherys down to seven. When Nicolas sacrificed his second Farmhand David grabbed the chanced to shuffle the Barbarian away with a Repel.

Olivieri tried to flashback the Ambush but Humpherys had a Syncopate ready for it. A Pardic Firecat, with a Crackling Club, joined the Petravark and for once David was not on the receiving end of the attacks.

Completely out of steam Nicolas Olivieri was forced to settle for a Cartographer. Then he drew a Blazing Salvo and since Humpherys was at seven he wisely decided not to save his Firecat.

The balance was now restore but Humpherys´ deck was packed full of high casting cost powerful spells. Nicolas´ only creature - Cartographer - died under part of a Liquid Fire. The way was now clear for the remaining Petravark once again.

The French´s pace was living up to Humpherys´ legend. He thought about his options for a while before finally going into token mania: Acorn Harvest. Complete with Flashback for the full four tokens.

He attacked with them bringing David Humpherys down to two before playing Possessed Barbarian for a blocker. Humpherys reached to the top of his deck...

And pulled a Liquid Fire. Good enough to shoot down the Barbarian, deal damage to Nicolas and clear the way for the last swing by the Petravark.

This time Nicolas came out much slower. He tried a turn three Twigwalker and Humpherys dispatched it with a Syncopate straight away. On the next turn his Possessed Barbarian resolved while the American dropped Aquamoeba and went about stealing lands with Petravark.

A Pardic Firecat came out and it kept the Barbarian company in the Red Zone. David returned the favour and dropped a second Petravark taking all the green away from Olivieri.

The French, unlike the crowd, didn´t find that funny at all. He used a Temper to kill one of them getting a Forest back to play Chatter of Squirrels. Still, Humpherys was persistent and a third Petravark again took the last Forest.

Despite all this mana fight the Barbarian was still taking huge chunks out of David Humpherys´ life. The American was down to seven, while his opponent was still at a very high fifteen.

The American played a Dreamwinder to finally stall the ground and it was Olivieri´s turn to slumber into deep thought. He settled for flashbacking the Chatter and playing Halderbier and waiting for another opportunity. 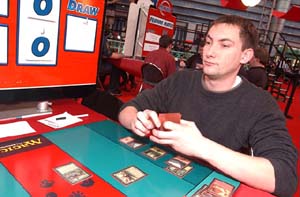 Liquid Fire took out the Barbarian as David reached the magical six mana. He could now cast his expensive spells. Anarchist got him the Fire back and added another creature to the huge armies.

Blazing Salvo took out Dreamwinder and the following turn a Wild Mongrel showed up. With the clock winding down things got a bit tense. The second casting of Liquid Fire took out the Mongrel and Syncopate ate up Elephant Ambush.

Neither of them seemed able to find a way across the table until time was called. Humpherys sacrificed Crackling Club and played Kamahl´s Sledge to mow down Olivieri´s creatures.

Still he couldn´t swing in for the kill. So he passed the turn. Again the French agonized looking at the Rites of Initiation in his hand. He Flashbacked the Harvest, dropping down to five, and now had three more creatures than the American.

Just enough to finish things of on the next turn unless Humpherys could stop him. On his last possible turn Olivieri threw Violent Eruption that would bring him down to three.

Apparently all he needed to do now was swing. But Humpherys had the Syncopate for it. So Nicolas just showed his tapped out opponent the Rites to settle the match.

2 Acorn Harvest 1 Chatter of the Squirrel