Round 6: David Rood vs. Mike Turian 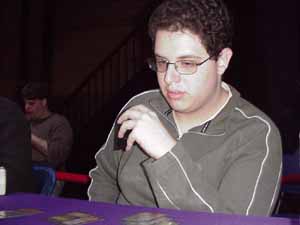 On one side, the one, the only, Mike Turian. CMU mainstay. Brain Trust. All around great guy. On the other, Canada’s rising star, David Rood. Still feeling the flush of his Pro Tour finals appearance at Boston last year. The battleground: Sealed deck. Turian was confident. Rood, less so.

As Rood played a second land to go with his island, he made the following proclamation:

Rood got on the board with a Glory Seeker, quickly trumped by Turian’s Sparksmith. It was as if the shortcomings of blue-white had decided to show up en masse. Rood committed nothing more to the board while Turian swept away the soldier.

“I will attempt to annihilate him.” – Mike Turian

Turian augmented his force with a morph. Rood tried a face-up Defender of Order. Turian was undaunted and charged. His morph turned out to be Daru Mender, and the ‘Smith sent the Defeder to the graveyard. Sage Aven forced more damage out of the ‘Smith, effectively trading with the Mender, but things were not looking great.

He tried to turn that around with Arcanis, the Omnipotent. Turian was unfazed. He played Skirk Marauder face-up, then Grappled Arcanis and shot him down. Warped Researcher was Rood’s last line of defence. As he scooped up his cards, Turian revealed his last morph: A foil Exalted Angel. 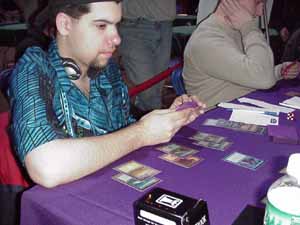 Rood opened up a hand of Mages Guile, four land and Fateshaper and Crowd Favorites. He kept, and cycled into Glory Seeker and morph to bring the beats. Turian was behind, with just a morph of his own. He tried to trade morphs, but Rood’s was Defender of Order. Turian’s Aven Redeemer got ready to hold the fort.

It was. Turian was ready with Slice and Dice to reset the board. Rood came down with the Fateshaper. All Turian had was Krosan Vorine. Improvised Armor made things even trickier. Worse, his next play of Exalted Angel had to chump. Rood pressed with Crowd Favorites. Turian scored a moral victory when a Crown of Fury came off the top to help the Vorine assassinate the Favorites, but without an answer to the flier, the game was Rood’s.

For the deciding game, Turian again had the mighty Grappler to start. When he followed up by tapping two land, Rood started chanting “No, no, no!” It was just a Deftblade Elite and Goblin Sledder. Rood shut down the whole crew with Glory Seeker. He matched Turian’s morph with Mistform Dreamer.

This last he said in reference to the Crown of Fury he’d pulled off the top, for his Deftblade Elite. His whole team smashed in. He traded his Goblin Grappler for clearing Rood’s board. Then he played the Sparksmith. Rood played a Sage Aven and looked for answers. They were not forthcoming. Exalted Angel was more than enough to earn the scoop.