Round 6: Don't Fear the Reaper

2006 Rookie of the Year Sebastian Thaler and Pro Tour San Juan Top 8 competitor Jeremy Neeman both sat at 5-0 on the backs of their Modern Constructed performances heading into the first of three rounds of Magic 2012 booster draft. Which of these two players would continue his winning ways?

Thaler won the die roll and decided to play first, and started the match with a Phantasmal Bear on turn one. Neeman only had a Swamp on his turn. Thaler attacked with Phantasmal Bear, which brought Neeman down to 18. Ponder and a second land rounded out Thaler's turn. Neeman played his second Swamp and used Consume Spirit for zero to target the Phantasmal Bear. Thaler sacrificed the Bear, and Neeman passed the turn. Thaler had a third land and an Auramancer to resume the pressure, while Sacred Wolf was Neeman's third-turn play. Thaler attacked with Auramancer which dropped Neeman to 16 life. Thaler then played Solemn Simulacrum to bring his land count up to five. 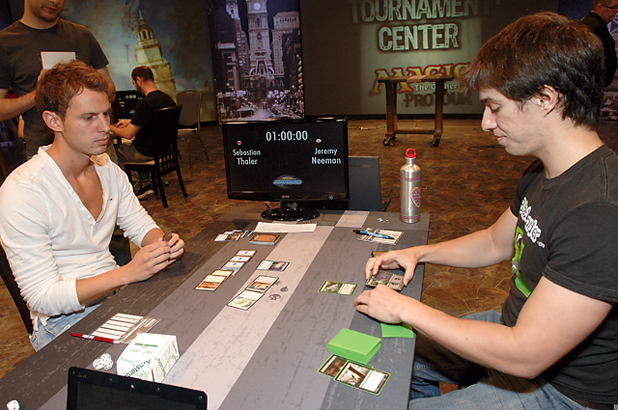 Sebastian Thaler and Jeremy Neeman face off in the first round of Magic 2012 Draft.

Neeman left his Wolf back to play defense alongside his newly played Runeclaw Bear. Thaler summoned an Æther Adept to bounce Runeclaw Bear then attacked Neeman down to 12. Neeman went for a Doom Blade on Thaler's Æther Adept during his main phase, but Mana Leak from Thaler protected the Wizard. Neeman used his last to untapped lands to recast Runeclaw Bear. Thaler's next turn only included an attack with all three of his creatures. Neeman blocked Æther Adept with Runeclaw Bear and dropped to 10 life. Neeman's turn was less impressive as he laid an Onyx Mage. Thaler had a much better use of his mana on his following turn, as he cast a Sun Titan. Sun Titan brought back Æther Adept, which in turn bounced Neeman's Onyx Mage. Neeman realized that the Sun Titan would be too much for him to handle and conceded.

Neeman opened with a Swamp, while Thaler started with Island and Phantasmal Bear. Neeman only laying a Swamp on turn two meant that Thaler could attack with his Phantasmal Bear. Neeman dropped to 18 life, and Thaler added Coral Merfolk to the battlefield. Neeman played his third land, a Forest, and used Arachnus Web to trigger Phantasmal Bear's sacrifice ability. Thaler enchanted Coral Merfolk with Divine Favor and attacked. The life totals now stood at 23 to 15 in Thaler's favor. Neeman dropped a Cemetery Reaper and a Forest on the next turn. 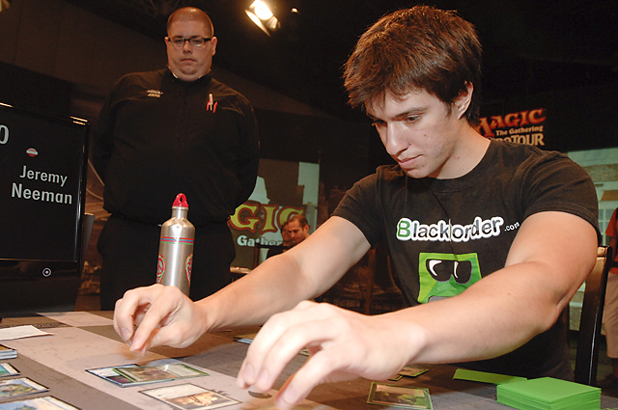 Thaler, still only with two lands on the battlefield, attacked Neeman down to 12 and played Gideon's Lawkeeper. Neeman laid a land and passed the turn with mana available to activate Cemetery Reaper. Thaler continued his assault with his Coral Merfolk enchanted by Divine Favor. Neeman sat at 9 life and Thaler found his third land of the game. At the end of the turn, Neeman created a Zombie token with Cemetery Reaper. Neeman declared his attack which prompted Thaler to tap the Zombie token. Cemetery Reaper attacked Thaler down to 21 while Tormented Soul and Devouring Swarm joined Neeman's forces. Thaler attacked with his Merfolk. Neeman blocked with Devouring Swarm and sacrificed Tormented Soul and his Zombie token to pump the Swarm. 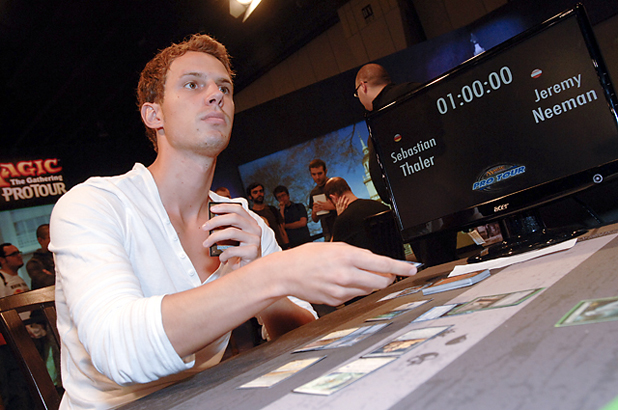 After both creatures died, Thaler used Auramancer to retrieve the Divine Favor that had enchanted the Merfolk. Neeman played a Swamp before ending his turn. At the end of Neeman's turn, Thaler tapped the Cemetery Reaper, which forced Neeman to create a Zombie token then instead of on Thaler's turn. Thaler drew an Aven Fleetwing. That, combined, with Divine Favor would make short work of Neeman's remaining 9 life. Neeman's last winning effort was to try to race the Fleetwing with a Carnage Wurm, but Thaler used Gideon Jura's Lawbringer to keep the Wurm at bay while he finished Neeman off through the air.

Sebastian Thaler defeats Jeremy Neeman to move on to 6-0 at Pro Tour Philadelphia.