Round 6: Dynasty vs. A Little Too Sick 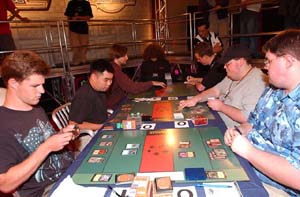 Dynasty vs. A Little Too Sick

This match was an odd assortment for a number of reasons. On one hand there is Dynasty, with old-schoolers Brian Hacker and Gab Tsang teaming alongside Masters kingpin Ben Rubin. Across the table were two of the games finest limited players: Kyle Rose and Kamiel Cornelissen, who met in the quarterfinals of Pro Tour - Los Angeles this year. Taken together, the two teams boast fourteen Top 8's, with only Eric Froehlich having less than two to his name. The winner of this match would make Day 2, while the loser would have to take its next round or sit out.

Hacker, playing against Cornelissen, got to smashing quickly. Nomadic Elf and Radiant Kavu kicked things off, while Cornelissen was slowed by clumsy mana. He Hobbled to buy time, but Hacker just kept making monsters, now helped by Fires of Yavimaya.

Tsang was happy to match Eric Froehlich card-for-card, since he held Yawgmoth's Agenda. Froehlich seemed to get the better end of the deal, but he didn't suspect the bomb that Tsang was about to drop. And speaking of bombs, Rubin showed Rose his best munitions impression when he threw down Crosis, the Purger. It was over in two turns.

The cavalcade of dragons continued. Hacker imported Chicago technology when his Rith hit Cornelissen with haste. The Dutchman took it, then Repulsed when it came back for seconds. Hacker wasted no time tapping out for an encore, and Cornelissen made him pay with Evasive Action.

Froehlich complicated Tsang's master plan with Power Armor. Now Tsang couldn't effectively trade creatures. What's worse was that he kept finding Gray Ogres instead of lands, so he couldn't make his Agenda and maximize it. He chumped and chumped until his hand was empty, then laid out the Agenda with two mana to Terminate from the graveyard.

Cornelissen continued to thwart Hacker. He had Exclude for his Charging Troll, and a Flagbearer to keep combat in his favor. Hacker peeled Magma Burst, and took care of the problem. Next turn a hasted tapper made sure he brought lethal damage.

Rose played textbook red-black in game two. He made early, small monsters and removed Rubin's threats. A kicked Duskwalker presented a Rubin with a particular difficulty. He tried to slow it with Cursed Flesh, and used Repulse on another of Rose's creatures to buy time, but was eventually overwhelmed. 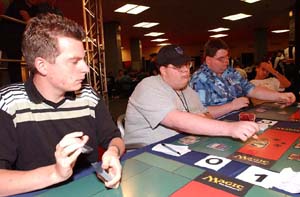 Tsang's life total was low. That, combined with his lack of immediate banishes meant that he was at the mercy of Froehlich's Power Armor. He chumped for a couple of turns, but eventually Froehlich played a second creature, and Tsang was finished.

Hacker was Dynasty's lone game-two ray of sunshine. He had Sunscape Apprentice, Nomadic Elf, Benalish Trapper and Pincer Spider at the ready. Cornelissen Hobbled, but Hacker was ready with a kicked Orim's Thunder that took down a Standard Bearer.

Froehlich stalled at two land against Tsang. He did have some answers, Bloodfire Dwarf for Rogue Kavu, Strafe for Firescreamer, and Fire/Ice to take out Shivan Zombie. What he didn't have was a third land to get in the game. Tsang started drumming him with a second Rogue Kavu, taking the game in short order.

Rubin struggled with a land-heavy draw against Rose in their deciding game. Rose had plenty of land, too, but he had a kicked Duskwalker and a Keldon Necropolis. He traded his creatures with Rubin at an advantage, and swung with his 'Walker until Superman extended the hand. The first match belonged to A Little Too Sick.

Cornelissen continued to work against the tide of Hacker's good cards. He worked his defense with Spectral Lynx and Samite Pilgrim, which was great, until Hacker decided his Charging Troll needed Armadillo Cloak. Cornelissen was tragically short on bounce. He blocked judiciously, but Hacker had plenty of creatures in reserve, even if Cornelissen found an answer for the Cloaked monster. Suddenly, the teams were evened up.

Froehlich opened up a powerhouse for the deciding game. Nomadic Elf, then Quirion Sentinel making way for Horned Kavu. Tsang had all of a Ravenous Rat on his board. Tsang augmented with a Lava Zombie and pushed it in the way of the incoming Horned Kavu. His face fell when Froehlich rescued with Fleetfoot Panther. 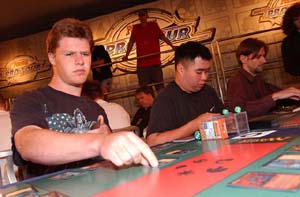 That seemed like the end of the match. Tsang untapped and replayed his Rat, catching the Sentinel, and Strafed the Elf. He ate three. Froehlich added a Kavu Climber to his team. Tsang made a Firescreamer and hoped. It took down the Climber on its next attack. Horned Kavu reloaded the Fleetfoot for another round.

But Tsang had Bog Down! Froehlich's hand was stripped, and Tsang Recovered his Lava Zombie. He took some more damage and Zombied it up, taking down the Horned Kavu. And now it seemed that Froehlich had run out of gas. He made a Quirion Dryad only to see it Zapped. His last card was pulled with the Rats. Tsang was at six, but Froehlich couldn't convert.

Now Tsang started to hammer. He had Phyrexian Reaper and Dwarven Patrol to smash in. Froehlich found a land, and then a land, and extended the hand in bewildered defeat. Looking at his draws, it was one of the worst run of cards he'd ever seen. After starting out 4-0, A Little Too Sick had to win their last round, while Dynasty had secured their Day 2 seat.