Round 6: Ed Fear vs. Ben Rubin 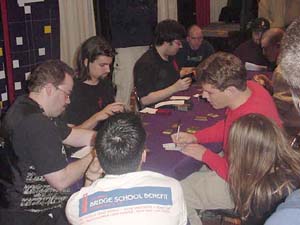 Reporting on a match with Ed Fear in it is almost redundant; Ed, back in the game after a year-long enforced absence thanks to some shady sideboard dealings, narrates his own matches like Don Pardo on acid, discussing every card with comments both obscene and amusing.

Ben Rubin, as usual, needs no introduction. You should know who he is by now. Shame on you.

Ed started out the match by showing his foil Giant Cockroach to the crowd, claiming there was an uncanny similarity between that and Uktabi Orangutan, and not in a positive way. Rubin, for his part, demanded to see the card, and agreed.

Rubin, as is his wont, offered to armwrestle Ed to see who went first, but Ed was wise to Rubin's massively-muscled manhooks; "I'm a lover, not a fighter," he said as he declined. Rubin offered to let Fear use both hands to his one, and Fear instead countered by offering the match to whoever could offer the nearest Sideboard reporter, all of whom were male, the biggest sloppiest kiss.

Instead, and thankfully, they chose to roll to see who went first, rolling matching 1s with Ben eventually coming out on top with a 9. He pumped his fist. "Ready?" he asked.

"Probably not," said Fear, as he drew his own seven.

Rubin dropped a forest, while Ed slapped down a mountain and summoned Goblin Taskmaster. Ben laid a swamp and laid a Wretched Anurid.

Ed responded by laying another mountain, making a Goblin Sledder, then saying "That's for me, 'cause I love it!" as Ben attacked him for three with the Anurid. Rubin followed up his early facesmashery with a morph.

Fear merely laid a mountain... And when Rubin attacked with his Anurid again, Ed said, "Hold, please... No, I got nothin'. Look at me! I'm a goat!"
He then took his three points in silence.

Rubin then cycled his Krosan Tusker to find another land. Ed wasn't helpless, though; on his turn, he cackled, crowing, "Look! Wretched Anurid's favorite friend: Symbiotic Elf!" Sure enough, not only could the Elf provide two blockers to chump the Anurid for two more turns after, but would cause Rubin to lose two life.

Rubin was unimpressed, and swung with the Anurid... And surprisingly, Fear didn't block, so Rubin matched Fear's elf with his own. The reason for Ed's crazy blocking strategies became hideously clear, though, when he cast a Stag Beetle, taking full advantage of all the creatures on the board, at 6/6.

"One for the kiddies!" Fear chuckled, then noted that Rubin had momentarily forgotten to subtract a life for the Stag Beetle. He sternly admonished him: "Look, if you can't keep your life straight, I'm gonna call a judge."

Rubin frowned... But only because he failed to draw a land the next turn, and glumly laid a morph. Ed Snarled in Undorakese, bringing yet another creature into play and bringing in the distinct possibility that hey, Rubin might die from his own Wretched Anurid. At the end of turn, Rubin said, "Eee Oh Tee," and Smothered the Goblin Sledder; in response, Fear cycled the Forgotten Cave, but turned up nothing of immediate interest - and Rubin was in the same boat, as he drew, sighed, and passed.

"I am not your homeboy," replied Rubin. 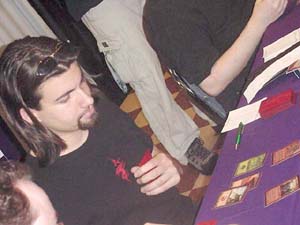 Ed Fear used the time to cycle Lay Waste, and at the end of Ed's turn, Rubin flipped up a Treespring Lorian, then laid a Tribal Golem triumphantly during his next main phrase.

Ed snatched the card up and read it, eyes wide. "Oh, Billy," he said in a voice not unlike a demonically-possessed Big Bopper. "Haste... TRAMPLE? A Regenerator?"

Excited, he Naturalized it with boyish glee, causing Rubin to slump in his chair.

"This is embarassing," said Rubin, looking at his dead Golem - and then joined it shortly thereafter as Ed played a Wave of Indifference for the kill.

"That's... enough," said Rubin, as he calculated the damage on the table and scooped.

As they shuffled , Rubin commented: "You are the biggest goon I have ever seen!"

"Fair," Ed allowed sagely. "Tough, but fair." He then frowned. "I can't be the biggest goon, can I? And surely we're not talking mass. If it's mass, I'm not even close."

"No, I guess you're not," said Rubin. "But you're up there."
"Hmm," Fear frowned as he flipped through his sideboard cards. "Where did the word goon come from?"

In the next two minutes, a furious etymological discussion took place, discussing not only the origins of the word "goon," but the phrase "mind your Ps and Qs," and it was discovered that not only was Ben taking an etymological course, but both he and Ed Fear loved dictionary.com's Word of the Day.

You heard it here, folks: Dictionary.com. The official site of Rubin and Fear.

Fear kept his hand with gusto - assuming, of course, that etymologically speaking, "Gusto" is Latin for "one-land hand." "I'LL KEEP!" he shouted.

To add amusement to ridiculousness, Fear played an Elvish Pioneer to accelerate into nothing.

Rubin charged on ahead, summoning Wretched Anurid, cycling a Krosan Tusker, and casting a Snarling Undorak... And then realized that he'd been savagely assaulting Ed with such lighthearted amusement that he had forgotten to draw the card for the Tusker. The judge was called, and Rubin got a warning, but was allowed to draw the card.

Ed finally got a second land and cast Lightning Rift, which seemed a mite ineffective in the face of two large beasts... And when Rubin laid a Crown of Vigor on the Undorak, Ed mumbled, "Okay - you convinced me."

Game 3, both players were fine. "In like Flynn," said Fear. "And I as well," replied Rubin. 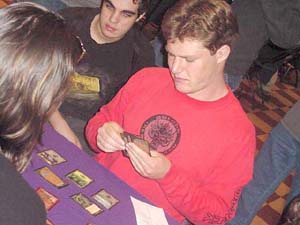 The game started slowly, as Rubin's first attempt at a creature, a morphed Treespring Lorian, died aborning thanks to a Fear-powered Smother. Rubin followed it up with a Mistform Dreamer.

"Who splashes for that card?" asked Ed.

"Hey, you're gonna see another one of 'em before the day's done," replied Rubin.

Fear laid a Goblin Sledder, while Rubin attacked and laid a Nantuko Husk.

Fear's next draw must have been exciting, for he drew his card and yelped, "Ooo! Daddy like!" He cast a morph. Rubin tentatively sent his Mistform Dreamer ahead... But to no one's surprise, Fear's morph was indeed a Spitting Gourna, which munched the Dreamer with gusto.

Rubin created a Barkhide Mauler and a Screaming Seahawk the next turn. He declined to search his deck, allowing, "Well, I suppose it's possible I don't have any more in there. I suppose." In response, Fear cycled a Tusker to fetch a land, causing Rubin to exclaim, "I have a bad feeling about this."

"AND I DRAW FOR THE CYCLING," said Fear, eyeing Rubin darkly.

Fear laid a Goblin Taskmaster, then used the rest of his mana to summon up a 7/7 Stag Beetle. Someone from the audience cheered.

"You better stop that," Ed cautioned. "I think one person rooted for me once, and he got banned for a year." By way of response, Rubin dropped a Leery Fogbeast. Fear sent in his lone Stag Beetle, shouting, "HE'S IN!", and causing an immense pile-up: Rubin blocked with everything, including the Seahawk, the Fogbeast, and the Husk.

There was a moment of consideration as Ed decided what he'd rather do: He could kill the Husk if he assigned all eight damage to it, or he could try to kill all of the creatures - which Rubin would just sacrifice to the Husk, causing the Husk to kill his Beetle.

And for the first time in the match, you knew it was serious, because Ed Fear fell silent.

He finally opted to assign damage to the creatures, and sure enough, they were Husked. At the beginning of Rubin's upkeep, Fear Shocked the now-lonely Husk, killing it and reducing the board to a Goblin Taskmaster, a Spitting Gourna, and an Elvish Pioneer - all on Fear's side.

Except that Rubin then played an Aphetto Dredging, getting back his dead Beasts, and laid the Fogbeast all over again. In an effort to keep the board as clean as possible, Fear sent in his Taskmaster - and when Rubin blocked, he pumped the Taskmaster up to a 2/2 , killing them bother.

Rubin laid a Barkhide Mauler and a morph, turning the tide distinctly in his favor as a wall of beasts were suddenly staring down a lowly 1/1 elf and a Spitting Gourna.

Fear whipped up a Nosy Goblin, daring Rubin to leave his morph face-down. Rubin took the bait and swung with everything; Fear blocked with everything but the Goblin, laying fatal damage on the Mauler... But Rubin's morph flipped over into a Snarling Undorak, who pumped the Mauler large enough to survive combat.

Fear, dejected, cast Sparksmith, one of two goblins. Rubin sent in again the next turn for seven, then cast Sage Owl; Rubin continued the hammering by casting Crown of Vigor on the Undorak, and sent everything in.

Fear blocked with both Goblins and tried to Sparksmith the Undorak away, desperately trying to survive... But Rubin easily had enough mana to pump it up to just enough to survive combat damage. In response, Fear Naturalized the Crown, reducing the Undorak's size to the point where the current damage was fatal.

However, there was still the little matter of a Mauler and an Aven on the board, and Rubin had just cleared out the last of Fear's blockers; seeing nothing in his hand the next turn, Ed Fear decided he'd rather draft.