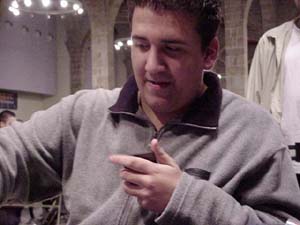 This round featured the unstoppable party machine, known to mere mortals as current European Champion Eivind Nitter, fighting against Stan van der Velden. An up-and-coming Dutch player looking for a serious ranking boost to qualify for the European Championship, Stan went as far as giving up his one bye in Antwerp to squeeze out a few extra ranking points.

A first turn Obsessive Search was greeted with the following:
Eivind: "Oohh... I'm impressed!"
Stan: "I try, I try!"

However Nitter got extremely serious next turn when he got locked at two mana and was forced to discard. Still he found a third land and had a Circular Logic ready for van der Velden's first creature: Aven Fisher.

The Norwegian followed that up with a Whispering Shade and Stan took the opening to play a Soul Scourge.
Eivind: "Wow."
Stan: "I'm a very good player."

While the French in the other Feature Match wrecked havoc noisily, Nitter dropped a Carrion Wurm that raised van der Velden's eyebrows a full inch. Trouble was on the way. In fact trouble had company: a Rabid Elephant showed up.

A Peek from the Dutch revealed Refresh, Rites of Spring and Deep Analysis. Satisfy about what he might expect in the near future Stan decided it was high time he dropped a big monster of his own: Sengir Vampire.

Now with seven points of flying damage the Dutch looked set to race out the Wurm-Elephant tag team (since he couldn't stop the Shade). Nitter took a few minutes in the Norwegian think tank to sort things out and sent the Shade and the Elephant in.

A Dirty Wererat chumped the Elephant and Nitter pumped his Shade to the maximum. This gave van der Velden the window of opportunity he had been looking for on the next turn: Crippling Fatigue took out the Shade.

Nitter drew and smiled, even while knowing he was one swing away from defeat if he couldn't muster a way to stop at least one of the flyers. A Looter chumped his Elephant and the Wurm got nullified by the graveyard.

Then Nitter show why he was so happy: Morbid Hunger on the Soul Scourger.

Still van der Velden was not about to surrender. He used a Fiend to steal Deep Analysis and dropped a Whispering Shade to chump if necessary. His Sengir toiled on giving Eivind a two-turn clock to solve all alone. Together with the Shade they could kill Eivind in one swing.

The Norwegian didn't have much but he played it: Soul Scourge to chump the Vampire. Nitter dropped to three and van der Velden dropped a Balshan Griffin to stop the Elephant. Everyone was a wrong move, or late answer, away from defeat.

Nitter drew, used his returned Deep Analysis, and after some thought scooped. Once again Sengir Vampire ruled a table. He might be new to this Red Zone thing but the old terro can still swing with the best of them.

Eivind: "He played Sengirrr Vampirrre. I couldn't find an answer for that."

They relaxed somewhat during sideboarding and shuffling but the tense last plays of the first game were still very visible in their demeanours.

Eivind: "You can start, even though you have the Vampire"

The Norwegian came out strong with a second turn Rotting Giant. He even cackled when Stan played Words of Wisdom, but he wasn't so happy when the Dutch Peeked, seeing Muscle Burst, Circular Logic, Sylvan Might, Whispering Shade and Patchwork Gnomes, and taking the Shade.

Eivind: "He drew Words again..."
Both together: "How luckyyyyyyyy!"

The Gnomes came in to fuel the Giant's attacks while Stan played a Looter. Together they attacked several times while the Dutch tried to come with a business spell. When Eivind tried to Muscle Burst one of the attackers Stan was ready with a Divert. 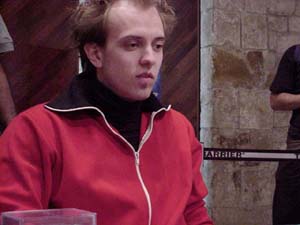 Finally van der Velden found a good blocker: Soul Scourger. The problem was Nitter had the Circular Logic and happily lost two cards to counter it with the help of the overworked Gnomes.

On the next swing van der Velden was forced to take desperate measures, chumping with his Fiend and thus releasing the Whispering Shade while dropping down to one. Then on the next turn things changed a lot. The kind of change that only an Iridescent Angel can provoke.

Nitter shrugged it away attacking with his bruising duo once again losing the Giant. He then played his Shade and the Dutch now cackled as van der Velden drew his card: Crippling Fatigue. He was back in business.

He followed that up with Nomad Decoy and Sengir Vampire. Nitter was REALLY in trouble now.

At least his three creatures, and Stan's missing second white mana, meant the Angel and Vampire had to stay back to block. Still the Dutch kept up the pace with a Cephalid Broker. To balance things out Nitter constantly poured new creatures into the table. Eventually an end of turn Basking Rootwalla proved too much for the Dutch.

Despite the Sengir Vampire and the Iridescent Angel shining on the table he couldn't pull it through.

With only six minutes on the clock as they shuffled up the match looked like it was heading into a draw. They breezed through the first turns with Stan playing Crypt Creeper and Cephalid Looter while Eivind going through a Chatter of Squirrels at top speed.

Tired of the ground they both moved up with the Norwegian getting Soul Sourger and van der Velden both Soul Scourger and Aven Fisher. A Peek revealed a Refresh and a Gravedigger in Nitter's hand but van der Velden was now playing full steam.

He played a Faceless Butcher stealing the Scourger and was now the king of the skies. Quickly Nitter found himself at ten and fishing for answers. A cycling Refresh and a draw later the current European Champion extended his hand showing his handful of lands and the only three spells he drew all game.

Eivind: "How unfair. He has about ten cards in his deck that are better than the best card in my deck."