Round 6: Eric Franz vs. Gerard Fabiano 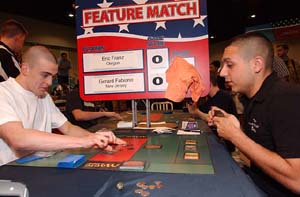 Last year's finalist Eric Franz has already spent his fair share of time in the Feature Match Area this weekend, but this was a first appearance for Gerard Fabiano. He was pumping the fist when he knew he was going to be covered. The lynchpin of Pro Tour – Boston Top 4 finishers Slay-Pillage-Gerard, Fabiano is one hoopy frood, and is never seen without his towel.

Franz had to send back his first hand, and Fabiano immediately moved for an opening handshake.

"Sorry you have to mulligan." – Gerard Fabiano

Of course it was smiles all around. Fabiano had to go down to six, so things were on an even footing. Franz led with Festering Goblin, and followed up with Spectral Sliver on turn three. Fabiano answered with a morph. Franz charged in without question, and traded Fester for what turned out to be Sootfeather Flock. He added Vengeful Dead to his team and gave it back.

Fabiano made an Aven Liberator. Franz played his fifth land, cycled a Barren Moor, then Swatted away the blocker. He hit for five, leaving Fabiano at eleven. Fabiano came back with a twice-amplified Aven Warhawk, showing Daru Stinger and Gempalm Avenger. Franz made his sixth land and dropped Fabiano to six. Grassland Crusader fortified his defenses.

Franz swung in again, and pumped twice to kill the Warhawk. He still had enough left over to make a morph, leaving him empty-handed. Fabiano brought out a Stinger with one counter, again showing the Avenger. Franz needed a good one. He pulled up Dragon Shadow, flipped over his Spined Basher, and sent for four, leaving Fabiano at a precarious two. Of course, he could have put the enchantment on his Vengeful Dead and achieved the same result, and he wouldn't have had to fear the Stinger.

"That was an insane rip." – Gerard Fabiano 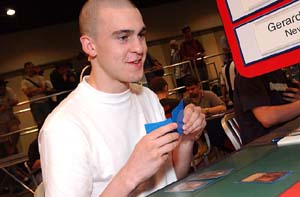 Fabiano sat back on his men. Franz erred again, swinging with both his creatures. Franz blocked the Vengeful Dead with his Stinger and cycled his Gempalm Avenger. After offing the Dead with first strike, he shot down the Basher. He was at a "comfortable" one. If Franz had swung with just the Basher, he would still have had the Dead to deal the final point of damage on its way out.

As it was, Fabiano got to swing for four and then play Decree of Justice for two Angels. Franz had a Graveborn Muse, but it only had one chance to give him the goods, and it failed.

Fabiano agonized over sideboarding, eventually choosing to send his Skinthinner to the bench.

Franz faced a hard decision with his first seven cards: Six swamps and a Death's-Head Buzzard. He thought for a full minute before deciding to send it back. He was rewarded with a playable six. He answered Fabiano's Silver Knight with Spectral Sliver. Fabiano made a morph. Then Franz busted out Graveborn Muse. Fabiano hit for two with his morph, and threatened something devastating with Daru Stinger, but showed only two Soldiers. Unfortunately for Franz, they were Aven Warhawk and Cloudreach Cavalry.

Franz swung in with his Sliver, and Fabiano blocked with both Knight and Stinger. Franz pumped to kill the Stinger, then played a morph. Fabiano hit land number five to make a 3/3 Warhawk. Franz took control with Call to the Grave. Now he had Necropotence AND The Abyss. 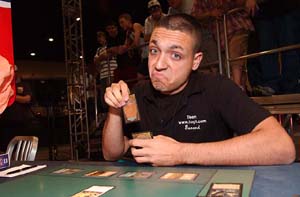 Fabiano sent his Silver Knight to the yard and hit with his men. Franz blocked morph with morph, but Fabiano revealed Daru Lancer to get rid of Franz's. Cloudreach Cavalry joined his team. Franz, now at just eight life, considered his options. The Muse hit for three. He waited.

Fabiano fired his Cloudreach and swung with both creatures. Franz had Cruel Revival to kill the Lancer and get back his Cadaver. He fell to five. Fabiano made a Gempalm Avenger. Franz dwindled to four. Clutch of Undead killed the Warhawk, but he chose not to swing in with his Graveborn Muse and try to either get it off the table or get in three damage.

Fabiano made no play. Franz dropped him to twelve, but he was at three. He made a Sootfeather Flock and a sacrificial morph. Again Fabiano waited. Franz went to two and swung for six. Death Pulse shut down the flier. Fabiano had a Gravel Slinger to stand in front of the Muse for a turn, and Franz died to its pain.