Round 6: Eugene Harvey vs. Alan Comer 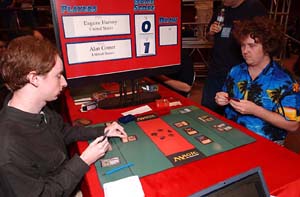 Local superstar Alan Comer and CMU's Eugene Harvey sat down in round six with the whole ball of wax on the line. Both players had 3-2 records and a minimum of 4-2-1 is necessary to advance to Day 2.

Both players had blue/black decks, but Comer's sports the bomb Aboshan, Cephalid Emperor, while Eugene's is host to the Cabal Patriarch.

After some small talk concerning Comer's failure to ever play in an Invitational despite five PT Top 8's, the match began.

Eugene promptly mulliganed, and stared for a long time at his six-card hand before deciding to mulligan again. He slammed the five-card hand on top of his library in disgust. "One land, one land, no land," said Harvey. 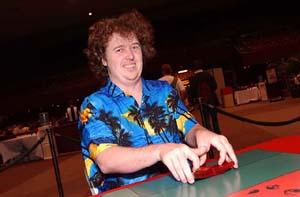 He sighed, drew four, and was faced with another no-land draw. He mulliganed to three, and his draw of Seafloor Debris, Dirty Wererat, and Aether Burst was good enough.

It was not actually good enough, however, to deal with Comer's "real" seven-card hand, and sideboarding was quickly under way.

Comer brought out the quick beats with Crypt Creeper and Frightcrawler, knocking Harvey to 15. The Californian summoned a dangerous Dreamwinder, which Harvey traded with a Famished Ghoul. Both players then summoned Dirty Wererats, but a Comer Innocent Blood dispatched Harvey's

Harvey brought forth three blue weenies - Cephalid Scout, Phantom Whelp, and Thought Eater - on his turn. Comer ran into them, trading Creeper for Whelp, and recast the Dreamwinder that he had gotten back with Morgue Theft. 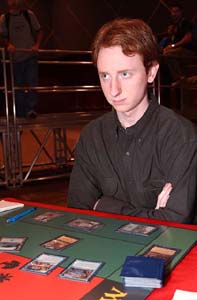 Comer's Wererat quickly achieved threshold thanks to multiple Peeks and liberal discarding, and Harvey drew little else but land before he succumbed.

Harvey is eliminated from Day 2 contention, but Comer can afford to draw his way in now. He has different ideas, though. "I came to make Day 3, not Day 2." Pity his Round 7 opponent.