Round 6: Eugene Harvey vs. Josh Wagener

Current National Champion Josh Wagener helped the US bring the team World Championship back to its perennial home this year, defeating the Finns in a tight match, and helping to prove himself as a National Champion. This round is a grudge match of sorts, as he's squaring off against the previous champ, Eugene Harvey, who has been at the top of this game for a while. He's also the reigning Grand Prix – Atlanta Champion, and is looking to repeat.

"These guys are going to see so much red zone," Josh joked, showing off his Birds of Paradise. 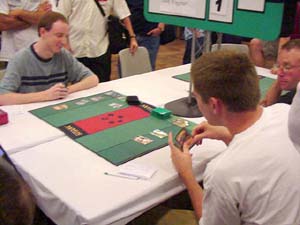 Both players kept their opening hands and the party started. Josh showed forests immediately, playing a Basking Rootwalla turn one and swinging with it turn two. His turn two Wild Mongrel was met with a hastily cast Mana Leak from Harvey.

Land drop three for Wagener was a mountain, showing everyone that he's playing the Standard deck that carried him to the National Championship, Red-Green. Eugene Harvey on the other hand is playing one of the few roguish decks doing well at the event, a blue-white control deck, akin to that played by Jon Sonne at Worlds.

Eugene played out a Standstill, and waited. Josh seemed very reluctant to break the Standstill and give Harvey three more cards with which to exert control. Finally the Standstill was broken with Call of the Herd, giving Josh an Elephant Token to play with, while Harvey could do nothing except draw the cards from the Standstill.

He passed the turn back quickly, with no activity at all. Not even showing the mana to play Wrath of God, Eugene appeared to be in trouble.

"What are you holding," Josh asked someone, maybe himself, maybe the crowd. He decided to press his advantage, played a Phantom Centaur. Eugene calmly countered it.

Again the turn passed from Eugene to Josh, with no more land hitting the table for Eugene. He was able to Unsummon the Elephant Token to prevent that damage finally, but he really appeared to be on the ropes. Another Phantom Centaur was met with yet another Mana Leak, but the table was firmly in Josh's control.

Eugene again drew his card, flipped through his cards, and passed the turn. Things were bad for the former National Champion as he passed the turn back. On his turn Josh took his Basking Rootwalla and turned it sideways, pushing it into the red zone. Eugene cycled a Decree of Justice in response, getting a single soldier for his effort, not exactly a stellar use of the powerful card. Violent eruption cleared the way and did three to Eugene for his troubles.

Eugene still was unable to find another land, and Josh added a second Rootwalla to the table, then played an Elephant Guide on it.

Harvey contemplated the suddenly larger looking Rootwalla for a moment, "Mana Leak," he announced. That ended the turn for Wagener, but when Eugene drew his next card he unhappily scooped.

Holding Deep Analysis, an Exalted Angel, Decree of Justice and other goodies, Eugene never found the land he needed to make use of them. The game ended with three Islands and a Coastal Tower on his table, never even enough white mana to play his Wing Shards. 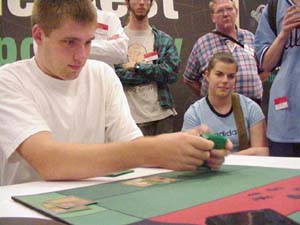 "You got mana screwed pretty bad," Josh remarked as the players shuffled up for Game 2.

It was the only thing either competitor said as Eugene was off shuffling with a vengeance. The deck had not made him happy in Game 1, and a good draw was vital to winning this match with Josh.

Both players kept their opening hands again, although neither sounded enthused about them.

Josh started the non-land permanent race with a turn one Grim Lavamancer, which Eugene let him pick up, using Chain of Vapor to return the red creature to his hand.

On turn two, Josh gave him a Wild Mongrel to deal with, instead of bothering to replay his Grim Lavamancer. Eugene happily allowed the Mongrel to enter play before sending it back with another Chain of Vapor.

The Chain returned the Mongrel to Josh's hand, and Eugene played Standstill afterwards. The Standstill didn't stay on the table long, as Josh quickly replayed both his Mongrel and his Lavamancer.

Again we saw the same series of plays. A cycled Decree of Justice for only one soldier, followed by an Eruption to keep it off the table. Eugene's life total fell to twelve. Things were a little different for Eugene though since the last time he was in this situation. This time he had the mana available to cast Wrath of God, and he finally called down this Wrath upon his hapless enemy. Josh was able to replace that Mongrel with another one.

"Go," Eugene said, only moments after finally getting an Exalted Angel on the table. Eugene had been unable to play his Angel in Game 1, and was being very careful not to play one face down in Game 2. The face down Angel would simply be a target for the Wagener's burn. Josh did take the opportunity while Eugene was tapped out though to get an Elephant Guide onto his Mongrel. Eugene couldn't counter it, and now his Angel couldn't block the large Mongrel without dying

The large Mongrel swung, and then shrunk. A Ray of Distortion from Eugene dropped the Mongrel back into the land of the bears. A second Mongrel tried to join his friend at the table, and is met with a Mana Leak from Eugene. Josh swung again, sending Eugene down to five life, and then to three with a Firebolt. Eugene swung back. Exalted Angel sent his life total back to seven, while dropping Josh to six. 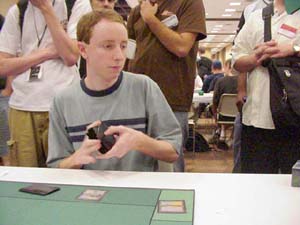 "Chain," Harvey said, setting the Chain on his own Angel. He quickly followed that up with the announcement of "Wrath," having safely hidden his Angel back in his hand. Josh scooped up his army and placed it in his graveyard.

The Exalted Angel came back onto the table on Eugene's next turn, and matched favorably with a Wild Mongrel for Josh. Two turns later the Angel had swung for the win.

A turn two Standstill was the first spell to land on the table, and Eugene appeared to have early advantage. Given no choice, Josh broke the Standstill with Call of the Herd, handing Eugene three new cards. With those he Unsummoned the Elephant Token and then play a second Standstill. Josh played a Sulfuric Vortex while Eugene was tapped out, but Eugene got three more cards.

A snicker went up around the table after Eugene's latest play. He played a third Standstill, trapping himself underneath the Sulfuric Vortex for the foreseeable future. Josh, and most spectators, seemed to have no idea what the past Champion was up to. The math was done on paper and in heads all around the feature match area, and people kept arriving at the decision that Eugene had given the game away.

The thought process said neither player would play a spell now, and that the Vortex would take two life from each of them until Eugene was at zero and Josh would win the game at one life. Seeming confident in that knowledge Josh played a land and passed the turn.

Losing this game was never part of the plan for Eugene though, as he waited three turns before cycling Decree of Justice to make two Soldier tokens. The tokens could attack Wagener with impunity, for the moment he tried to burn one he would give Eugene three more cards.

"Dang," Josh muttered before playing a Basking Rootwalla, which broke Standstill but gave him a good blocker for the Soldiers. Eugene seemed unconcerned, with good reason. The next turn he played out an Exalted Angel/

The Vortex was still on the table, so the life gaining of the Angel meant little for the remainder of the game, but at 4/5 she is a monster, and Eugene hopped happily onto her wings and rode them to victory.