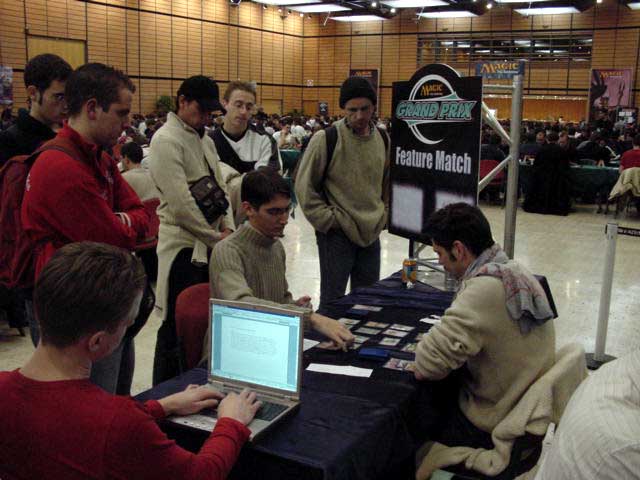 won the toss and opened the game with a turn three Spikeshot Goblin. All Jeudon could put across that was a Yotian Soldier. Vulshok Battlegear on Haim's side made that Spikeshot Goblin look rather nasty, but Jeudon had a Creeping Mold for it. Lodestone Myr was Haim's next threat, even though he didn't have any artifacts to use with it yet. Jeudon's Electrostatic Bolt finished off the Spikeshot Goblin and Viridian Shaman destroyed the Lodestone Myr, switching the tempo back to Jeudon. Yotian Soldier and Copper Myr were Haim's reply, but Jeudon next play made sure they weren't holding the fort - a Vulshok Battlegear of his own. He equipped the Shaman and beat down on Haim. 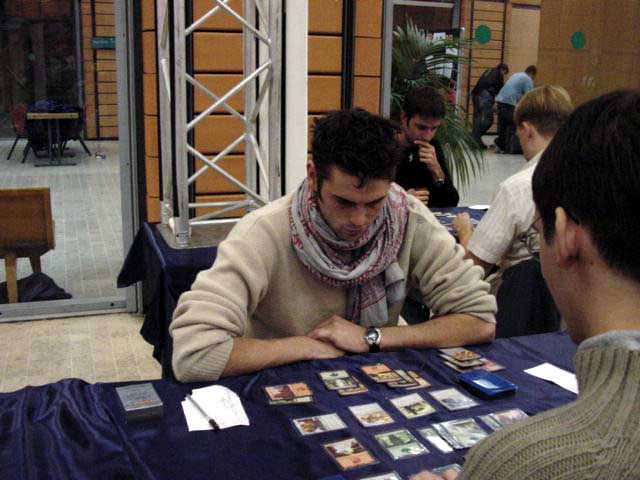 In order to stop the beatings, Haim cycled a Pyrite Spellbomb to try and find an answer. He drew and played Goblin Dirigible as a mediocre solution. Jeudon's Shaman still found it's way to the Red Zone and Jeudon switched his Battlegear to the newly-cast Leaden Myr. Haim attacked with his Dirigible and played out another Myr to chumpblock on his next turn. Jeudon charged back with his three creatures. Haim blocked Jeudon's Viridian Shaman with his Yotian Soldier but Jeudon's Predator's Strike made sure that the Yotian Soldier wouldn't survive combat. The same fate was decided for one of Haim's Myrs, leaving him with only Goblin Dirigble and a Copper Myr on his side of the board. Jeudon drew a Viridian Longbow on his turn, to seal the game for him. 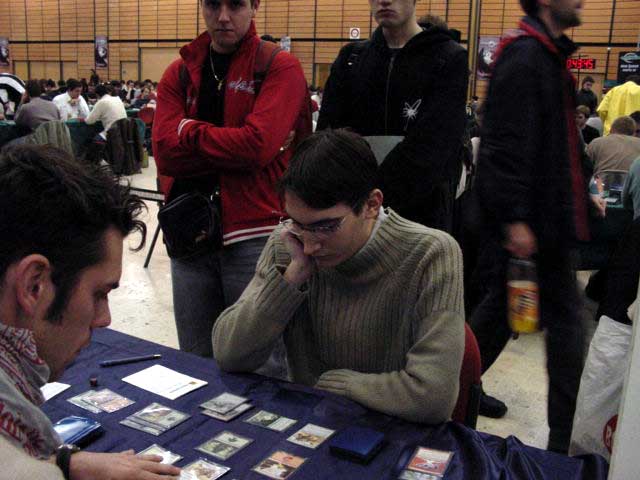 Viridian Longbow came down on Jeudon's first turn, turning all of his creatures into potential timmies. A Silver Myr for Haim made sure he could play a third turn Lodestone Myr, putting the pressure on Jeudon. Jeudon played out a Yotian Soldier as an answer, but it fell to Haim's Electrostatic Bolt. Haim only had 3 mountains in play and complained about Jeudon's board, which featured a Mountain, Forest and Swamp. Jeudon would pass his next turn without playing anything, and Lodestone Myr beat down on him, bringing him to 13. Hematite Golem joined Haim's team.

Jeudon's Deconstruct finished off the Hematite Golem and enabled him to summon a Pewter Golem. Lodestone Myr came in uncontested, bringing Jeudon to 10. A Mirror Golem, which received protection from artifacts and creatures, was tough for Haim to deal with. Still without Forests, Haim had to settle for a Goblin Dirigible. Jeudon sent in his Pewter Golem and Mirror Golem and Haim decided to chumpblock the Pewter Golem with his Lodestone Myr. Jeudon's Electrostatic Bolt on the Goblin Dirigible ended any hopes for Haim to finish this game quickly. He did however draw his forest, allowing him to Deconstruct the Mirror Golem, and play out Viridian Shaman to destroy the Pewter Golem. Another Pewter Golem on Jeudon's side evened out the game again.

Haim's next turn went by without a play, as he was hoping to draw his second green mana source. Jeudon equipped his Pewter Golem with his Viridian Longbow to get some more control over the board. It proved rather good when Haim played out a Vulshok Gauntlets and tried to equip his Silver Myr with it. The Golem did attack next turn, and Jeudon added a Duskworker to his arsenal. All Haim could do was equip his Shaman with the Gauntlets and pass the turn. Jeudon relentlessly attacked with his regenerating creatures and they went unblocked, dropping Haim to 2 life. Deconstruct on Haim's Vulshok Gauntlets made it look like Haim had no more outs. He played out an Oblivion Stone though, which would've been good enough, had it destroyed creatures and prevented them from regenerating. Although it was an impressive attempt, it wasn't enough to keep Jeudon from finishing him off next turn.