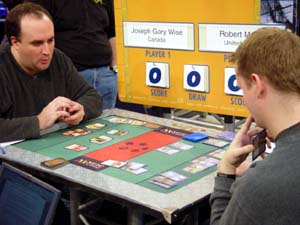 started off immediately with, "I'd be happy if you'd begin this feature match by saying that my opponent was once suspended for six months, because the rest of it's going to be him tearing me a new (bleep)." This was followed by the usual reminiscing about Bob's wife providing cookies, to which Bob replied, "Cookies didn't make it out of the hotel this time. Just me, Dave, and Neil sitting around the hotel room, eating brownies."

The mention of eating brownies, of course, led to speculation about the percentage of people in the building that were currently stoned. Leading theories placed the number between five and ten percent. Eventually, the competitors and former teammates were done shuffling.

"May the winner win the Pro Tour," said Gary.

Both players kept. Gary led off with a Viridian Longbow. Bob's turn two Silver Myr stared nervously across the red zone at the weapon. Its fears were unfounded, however, as Gary failed to find a third land. Bob attacked for one and made another Myr.

Gary found a Plains waiting on top of his deck, which enabled a Skyhunter Cub. Bob added a Clockwork Condor, leaving mana up for a Terror that targeted the Skyhunter Cub when Gary tried to equip it. On his next turn he attacked for five and played out a more permanent threat in the form of a Goblin War Wagon. Gary found a fourth land, but all he could muster was an Auriok Steelshaper, followed by equipping it with the Longbow for the bargain price of two mana.

"Very hot," deadpanned Bob. He Terrored it and attacked for seven.

Gary played Pyrite Spellbomb and passed the turn with three mana up. Bob played Bonesplitter, paused, and thought about what tricks Gary might have. He equipped the 1/1 Condor, perhaps hoping that it would be killed in response. Gary didn't bite. Maher then equipped the War Wagon and attacked with everything. Raise the Alarm generated two Soldier tokens, one of which traded with Iron Myr while the other jumped in front of the War Wagon. Gary fell to five and the Clockwork Condor fell apart. Pyrite Spellbomb was then sacrificed at end of turn to finish off the 5/3 Wagon.

Wise summoned a Soldier Replica with the game looking stabilized. It traded with the Silver Myr and Bob passed the turn back with a lot of lands in play. Gary played Skyhunter Cub, and when Bob again failed to do anything, attacked for two. He added Fireshrieker. Bob untapped and played a seven mana 3/3 Broodstar, then equipped it, but it was promptly Arrested. 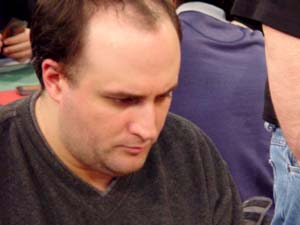 Still with only four lands, Gary attacked yet again for two and played Spikeshot Goblin. The turn after that he put Fireshrieker on Skyhunter Cub and attacked for six, holding Electrostatic Bolt as well as a number of more expensive spells like Triskelion. Bob cycled through an Aether Spellbomb, looking for anything, and then Neurok Familiar‘d into a second Aether Spellbomb.

"That was an odd little chain reaction."

Bob thought for awhile, then ended his turn and Wise shot the Familiar with the Goblin. He then attacked with the double striking Cub and Maher had no choice but to return it. It was replayed. Bob drew yet another blank and died having drawn most of the lands in his deck.

Gary removed Hematite Golem from his deck and added in a Krark-Clan Shaman. Bob added a Scale of Chiss-Goria.

Bob mulliganed a one land hand. As he was shuffling, Gary asked, "Is there a water place around here? They usually have one. Eh, he's almost done shuffling, I'll wait." Paul Jordan spoke up from the crowd: "Gary, do you want me to barn you some water?" A moment later he returned with two cups.

Gary played and sacrificed Pyrite Spellbomb to kill Neurok Spy, then attacked for one. Bob Terror‘d the Spikeshot at end of turn. Both of them did nothing with five lands. They followed this up by doing nothing with six lands.

Finally Bob found a Goblin War Wagon. Gary blew it up with Viridian Shaman and attacked for another point. Maher, calling for Barter in Blood off the top, instead drew a Swamp. He was holding a useless Domineer, Terror and another land. Gary added Skyhunter Cub. 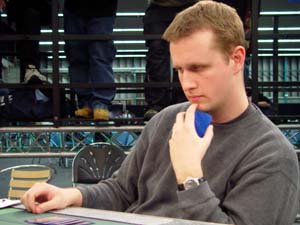 Bob drew and played Silver Myr. Skyhunter Cub died to Terror, but the Viridan Shaman got through. On Maher's side, the hits kept coming: Iron Myr arrived to shore up the defenses.

Gary again did nothing except attack for two, though he was holding five cards in his hand; either he had some tricks or he was holding a lot of lands. Bob stumbled upon some action in the form of a 5/1 Nim Shrieker, but it was tapped with an entwined Blinding Beam. Shaman and Steelshaper entered the red zone and Roar of the Kha saved the Steelshaper and dealt another point. Bob was seemingly drawing an endless stream of Myrs as he played yet another one.

Gary played Longbow, shot down the blocker and attacked for two. Another Blinding Beam sealed the deal.