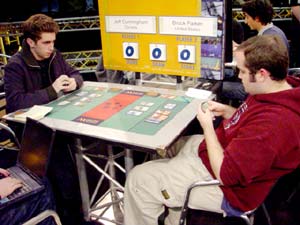 players are up against the wall this round- a loss will knock them out of contention for day two. Jeff Cunningham was so focused that he refused to perform one of his trademark Action Poses.

Parker started with Lifespark Spellbomb and cycled right through it, then played Pyrite Spellbomb. Spikeshot Goblin followed, Cunningham played his third land in Glimmervoid, and then brought out Loxodon Warhammer. The Goblin attacked for one, and Parker played Vedalken Archmage. Cunningham enchanted the Spikeshot with Fractured Loyalty, then played Scale of Chiss-Goria to target and control it. The Spellbomb killed the Spikeshot, and Parker played Solemn Simulacrum. There was a bit of an issue, because Parker thought he could stack the Archmage and the Simulacrum's come-into-play ability, and tried to search up the land before drawing a card. This isn't legal, so a judge was called and Parker got a warning, then got to do both in the proper order. Cunningham was still stuck at three land, and summoned Nim Lasher. Parker continued to draw cards off the Archmage, playing two off-color Spellbombs and a Dross Scorpion. The Lasher picked up the Warhammer, and was blocked by the Simulacrum; a second Scale came out to keep the Lasher alive.

Alpha Myr and another off-color Spellbomb drew Parker into more cards, and he summoned Neurok Spy and Somber Hoverguard. Dross Scorpion would have provided a temporary answer to the Warhammer since it could block and kill the Nim, so Cunningham used Domineer to steal it. Instead, Alpha Myr and Neurok Spy blocked to kill it, giving Cunningham life points and trample damage in the process. Parker summoned Cobalt Golem and a Vulshok Berserker, attacking with just the Hoverguard. Cunningham didn't attack with the Scorpion, and played a 5/1 Nim Shrieker. Thoughtcast drew Parker even more extra cards, and he played Neurok Familiar hitting a Spellbomb. He played it, followed by yet another, and Banshee's Blade (drawing a card for each). Myr Enforcer came out for free, Parker attacked with the Berserker and Hoverguard, then played another Hoverguard. Cunningham just played Hematite Golem, and ended his turn. Banshee's Blade went on a Hoverguard and both attacked for six.

Cunningham played Mask of Memory and attacked with a Shrieker swinging the Warhammer- Cobalt Golem and Neurok Familiar blocked and traded with it. The Hoverguards attacked to bring Cunningham to 24, and Parker played a Longbow, drawing a card and bringing his library to two. Thanks to moving it around, he was able to kill off the Hematite Golem that blocked the Enforcer, but had survived thanks to the Scale. Cunningham played Pewter Golem, and Parker passed around the Longbow to kill it off despite the Scale. The following attack brought Cunningham down to nine, while Parker had one card left in his library. Cunningham just played a Nim Shrieker, and conceded when Parker was about to send all his creatures in for an attack. 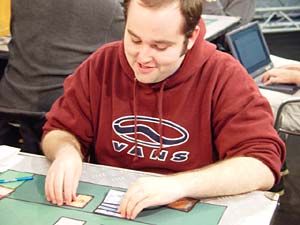 Parker played a first turn Spellbomb and a second turn Myr, while Cunningham played a Granite Shard. Spikeshot Goblin gave Parker his own "Tim", and Cunningham summoned Hematite Golem. Parker played Neurok Spy, and a second Myr. The Golem attacked for a point of damage, and Granite Shard shot down a Myr. Wizard Replica added to Cunningham's side, and Glimmervoid was left untapped. Parker played Banshee's Blade, and put it on the Spy to get a very fast clock going. Cunningham attacked back for four, and used Detonate to get rid of the Blade. The Spy and Spikeshot attacked for three, and Parker played Cobalt Golem. The race continued as Cunningham's Golem dealt three damage. A 6/1 Nim Shrieker was blocked by Cobalt Golem, and Spikeshot Goblin blocked Hematite Golem. The Goblin shot the Shrieker, and sure enough, Cunningham had the Scale that Parker had been playing around. The Shrieker still died, but Cunningham played another one right away. A turn later, Parker conceded. 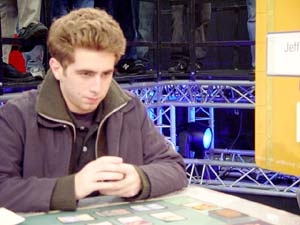 Viridian Longbow, Neurok Familiar and Spikeshot Goblin all helped Parker make the most use of his mana for the first few turns of the game, and Cunningham played Fractured Loyalty on the Spikeshot. Parker put the Longbow on the Familiar, and ended his turn. Cunningham only played a Myr and missed his third land drop, so Parker shot it down and pinged him for one. He found a third land but still had no play, and Parker played Pyrite Spellbomb along with Somber Hoverguard. A Scale let Cunningham take control of the Spikeshot, but it came back to Parker's side after being shot by the Longbow. Vulshok Berserker came out and attacked along with the Hoverguard for six. Cunningham didn't have much defense going, and just played Hematite Golem. When Parker killed it with Electrostatic Bolt, he conceded.