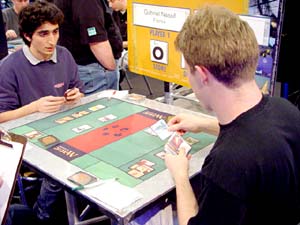 of the players in the Feature Match Area were facing elimination. Anyone without twelve points would be done for the day and the who's who of Magic that sat on the stage all had two losses pressing into their backs. Gabriel Nassif saw many a Day 2 and his fair share of Sundays last season.

His opponent Ben Rubin was fresh off of his GP Anaheim vicotry. He was not expected to be here--he said he would not be attending during the Grand Prix. He grinned sheepishly when reminded thqt he had dismissed the possibillity of coming here.

He was wearing another Che Guevara shirt just like in Anaheim. I asked him if that was going to be his regular tourament wear insead of the truth, justice and American way of the Superman shirts that he has sported in the past.

"I am not feeling too patriotic these days. I hear we're going to Mars. We're cutting social programs and going to Mars-it is surreal!" He may have been down on America but he wasn't giving the French any love just the same.

Gabriel wanted to make sure that no matter what happened they would have a shot at money, "Splits or no?"

Ben just shook his head slowly and noted sadly, "...and you don't have a die either." 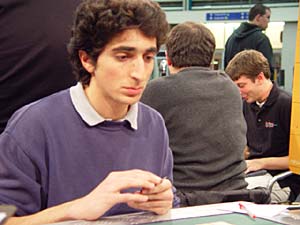 Gabriel opened with a Viridian Longbow and Ben played an Ancient Den and a Lifespark Spellbomb. Gabriel frowned at his turn two Alpha Myr, "Why aren't you a Den-Guard?" He attcked for two on the next turn and equipped the Myr after playing his third land.

Ben went off on his next turn when he was able to play two Myr Enforcers and a Frogmite-drawing three cards in the proceess. Gabriel played a Dragon Blood and hoped for some way to stay in the game but scooped when Ben played another Thoughtcast and an Aether Spellbomb.

Spectators chuckled over Ben's explosive draw. Ben looked at them sternly, "Why would they want to laugh at you?"

Gabriel tried to muster his trademark smile while he looked through his sideboard but it wasn't sticking. All he could manage was a shake of the head and a "So dumb." 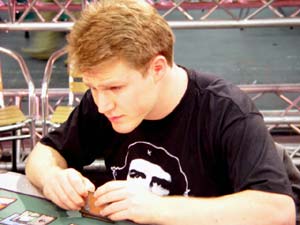 Gabriel sent back a five land hand after an intense internal struggle. The next hand had three lands and that was all he would manage for most of the game. His Leaden Myr allowed him to Detonate a Wizard replica and cast an Icy but he could never quite get in the game despite a slower start from Ben.

Ben sealed the game with a Betrayal of Flesh that he entwined to get back a Looming Hoverguard. Gabriel was disgusted and critisized Rubin for a play where he Shattered Nassif's Dragon Blood over the Icy Manipulator that kept a Somber Hoverguard at bay all game.