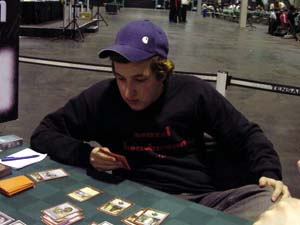 Wenzel wins the flip and decides to play first. He mulls over his hand briefly before sending it back. "Only one land." the German complained. While Wenzel is shuffling, Olivier declared that he wants Craig Jones to write the coverage this round! "I have nothing against you," he said to me, "but who won the last GP Birmingham eh?? Craig Jones!" Unfortunately, Craig was busy catching up having run the coverage all by himself so far, so Olivier was stuck with me. Wenzel finishes shuffling and keeps his six-card hand. Meanwhile, Olivier is content with his opening seven.

Players lead with plains on their first turns. Wenzel then made a Forest and accelerated with a Copper Myr. Olivier answered with another Plains and a Talisman of Unity. Wenzel having no better use for his Myr swung in for 1, and made a Sun Droplet. Olivier played out his third Plains and used this mana to forge a Solemn Simulacrum, which went right to work fetching him an Island.

Wenzel made himself another land, an Auiriok Glaivemaster and passed the turn, having nothing more exciting to do with his mana. Olivier made a Leonin Den-Guard, a Vulshok Morningstar, and after some consideration equips it to the Den-Guard and passes. Wenzel made himself yet another plains but still had nothing to do, passing right back. Olivier, still going strong, made himself a Mountaihn, a Pyrite Spellbomb, and swung in for 6 with his Simulacrum and Den-Guard. Wenzel's 1/1s weren't keen on the suicide mission, so their master dropped to 14, adds six counters to his Sun Droplet, and Olivier enhanced his army further with a Loxodon Mystic.

Wenzel was down in it with loads of mana but nothing good to do with it, like a fat girl with a pretty dress but no date to the dance. He played out an unimpressive Clockwork Condor, and both players scrabble frantically at their pockets as he runs out of counters. Olivier declares "I'm rich!" and throws big pile of coins onto the table. Wenzel passed the turn.

Olivier swung in for another six, and again his men went uncontested - Wenzel dropped down to 10. He then played a Thirst of Knowledge and discarded a Razor Golem, to which Wenzel muttered a pessimistic, "Okaaaay..." Olivier busted out a Leonin Bola, put it onto his Den-Guard, and passed it back.

Wenzel untapped and considered the board, shuffling a Rebuking Ceremony and Bonesplitter in his hand. Meanwhile Olivier was sitting pretty looking at Arrest, Quicksilver Bohemoth, and Electrostatic Bolt! Wenzel made his Bonesplitter and equipped it to his Glaivemaster, which Olivier tapped at end of turn. Olivier swung right in with all his men, and Wenzel, forseeing no outs from this point, simply scooped up his cards.

Olivier exchanges an Arcbound Slith for Vulshok Gauntlets, while Wenzel takes out a Journey of Discovery for a Turn to Dust. While the players shuffle a small but friendly dispute arises over coin ownership. The players decide that the French Euros must be Oliviers, and they agree to use Olivier's coins for the rest of the match.

Again Wenzel chose to play first, and again sent back an unsatisfactory first hand. With some reluctance he kept the second. "You can't play with all lands." He said unhappily. "Weeell...." Olivier differs jokingly, and keeps his seven once more.

Wenzel started off with two Forests but Olivier made the first play of the game with a Talisman of Unity on turn 2. Wenzel made a Soldier Replica, and Olivier stayed on course with a turn 3 Solemn Simulacrum. Wenzel played a Bonesplitter, issueed it to his Soldier, and ordered the Mechanical in! Olivier hmmm'd, and then laughed. "I have to remember, it's not always right to chump with this guy!"

"He's done his job!" says Wenzel, but Olivier keeps his Robot out of combat all the same, taking 3. Wenzel made himself a Neurok Hoversail but no fourth land, and passed the turn. Olivier answered with his Leonin Den-Guard and a Neurok Spy!

Wenbzel untapped and had a bit of a think. He eventually sent in his Soldier, and made himself an Arcbound Hybrid.

Following the pattern of the first game, Olivier again made a Vulshok Morningstar on his turn, put it onto the Den-Guard, and sent in the team. Wenzel took 8, down to 10. Wenzel untapped and shuffled nervously at this hand. He made a fourth land and eventually opted to Deconstruct the Vulshok Morningstar and moved both the Neurok Hoversail and the Bonesplitter to his Arcbound Hybrid. He swung for 4, dropping Olivier too to 10.

His turn spent, Wenzel passed and Olivier immediately sent in his team. Wenzel blocked the Solemn Simulacrum, but didn't have enough mana to use the Soldier Replica's Ability, and dropped to 7 from the Den-Guard and Spy. Olivier followed up with a Quicksilver Behemoth, which solicited an unhappy grunt from Wensel. 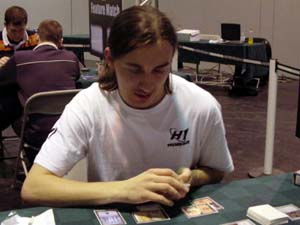 The Hybrid dropped Olivier to six, and Wenzel played out a lowly Leaden Myr, this time leaving 1W open for his Solider Replica's ability, Olivier thought some, and untapped. His strong four-card grip included an Arrest which swiftly made it's way onto the Soldier Replica. Wenzel looked on glumly as again Olivier's entire team came crashing in. Wenzel was forced to chump the Bohemoth with his Myr. Olivier passed and Wenzel untapped and drew only to find another Myr, this one Copper, to join the redundant Razor Golem and Darksteel Gargoyle in his hand. Out of options, Wenzel extended the hand.