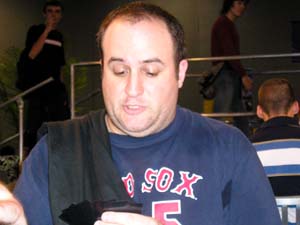 Wise, known Canadian, has long been an ambassador for the game of Magic. After a long career as a writer and Pro Player, however, he's thinking about finally packing it all in. Of course, he's threatened to do this before, but like so many who've adamantly turned their backs on the game they love, he hasn't been able to make it stick. Yet.

Osyp Lebedowicz, most recently the Pro Tour - Venice Champion, is best described as Magic's Clown Prince. Can you really trust a man whose pseudonyms include "Peppermint von Courderoy"? However, not even his outlandish exaggerations and phony tales can eclipse the fact that he's a heck of a player.

Feature Match Overseer Mark Rosewater came by to poke some good-natured fun at Wise, who responded with a mock shove and then put on his scared face.

"Oh no! What are you gonna do? Make me quit after Worlds?" - Gary Wise

The match started against a backdrop of banter and laughter. Lebedowicz kicked off with Auriok Glaivemaster, Vulshok Gauntlets, and then a Razor Golem for three mana. What was Wise's answer to these threats?

"You hang out with Turian way too much." - Osyp Lebedowicz

Lebedowicz suited up and swung in, then prepared to do the same again, but Wise had a Needlebug to stand in the way of the Golem. Lebedowicz fortified with Steel Wall and a Scavenging Scarab.

"I'd just like to give a shout-out to R&D for making such excellent cards!" - Osyp Lebedowicz

"Could you guys keep it down over there? We're having a serious game here." - Gabe Walls

Wise held up on all his mana and gave it back to Lebedowicz. He tried to equip his Glaivemaster, but Echoing Decay stopped that nonsense. He attacked again, and Wise failed his Wirefly Hive flip, falling to four. He added an Arcbound Worker to the table. Dross Prowler joined Wise's team.

"I think mine's worse when I'm at one and you're at twenty." - Gary Wise

Lebedowicz played it safe, playing a Transfixer and planning to win in turns to come. Again Wise missed his Wirefly flip. He did have a Nim Shrieker, but Lebedowicz continued to set up shop, moving his Gauntlets onto his Arcbound Worker. Finally, Wise was able to make a Fly.

He made a Bonesplitter for his fly to carry, and Lebedowicz let him swing for four. He locked down the Needlebug at end of turn, then got in with Nim Replica. It ended up eating both the Shrieker and the Prower. Pewter Golem gave Wise some big problems. He made another Wirefly and held back. It didn't matter. Razor Barrier gave Pewter Golem protection from Artifacts, and it swung in successfully.

Lebedowicz' good humor evaporated when he had to paris to six cards. Still, he was able to lead with Arcbound Worker and Vulshok Gauntlets. Wise dropped Bonesplitter, Slagwurm Armor and a discounted Frogmite. Lebedowicz put the Gauntlets on his Worker and bashed before passing it back. Wise suited up and hit for four. Skyhunter Cub came into play on Lebedowicz's side. 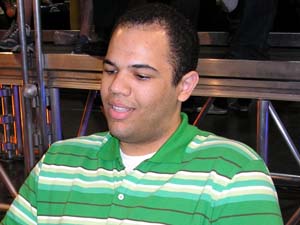 Wise hit again and passed it back. He had Irradiate ready when Lebedowicz tried to move the Gauntlets. Lebedowicz shrugged and brought out Auriok Transfixer and put the Gauntlets on it. Wise showed him a second Irradiate.

In obvious frustration, Lebedowicz scooped up his cards. He had gambled his already flagging draw on Wise not having the second Irradiate, choosing to put on the Guantlets instead of holding up mana for Razor Barrier. The right choice proved to be the wrong one.

While shuffling, he brightened up again when the subject turned to the official Magic website.

"I love magicthegathering.com! I go there every day! Watch, I can name all the columns. There's … uh … Through the Looking Glass … and … um …" - Osyp Lebedowicz

"They've all got those stupid names, like, Cheaper by the Dozen." - Osyp Lebedowicz

Keeping his spirits high, Lebedowicz windmilled a Steel Wall onto the table.

Of course, Wise immediately burst out laughing at the much-maligned wall, drawing a pout from Lebedowicz.

Lebedowicz followed up with Silver Myr and then Scavenging Scarab. Wise made a Talisman and dispatched the insect with Barbed Lightning before it could attack. Lebedowicz replaced it with Dross Golem. Wise busted out the mighty Prowler, ready to drag the Golem down. He also had Grimclaw Bats.

Lebedowicz swung in with Myr and Golem, and got a point through after Wise made the expected trade. Razor Golem was next up to bat. Wise came back with Atog and held his ground. Lebedowicz hit with his Golem after playing a Nim Replica. Wise took it. The last card in Lebedowicz's hand was a Leonin Skyhunter. Echoing Decay took out the Replica before it could cause any trouble.

Wise dropped a Frogmite and passed it back. Lebedowicz had nothing. Wise put Slagwurm Armor on his flyer and settled in for the long game.

"I doubt that. When did you start?" - Gary Wise

Osyp continued to draw goodies, this time a Grimclaw Bats of his own. Wise pulled up a Skeleton Shard, but had nothing to abuse with it. Meanwhile Lebedowicz ripped a Dross Golem. Wise held.

Lebedowicz's third rip was a Vulshok Battlegear. He tried to put it on his Cub but Irradiate took it down in response. Wise had cycled a Chromatic Sphere into a Necrogen Spellbomb, then took five when Lebedowicz put the gear on his Bats and swung in. He dropped Needlebug at end of turn.

Then Lebedowicz drew his own Skeleton Shard, and things started to tip his way. He got back a Dross Golem and played it, getting ready for a big swing. At first, Wise only had Elf Replica, but then came Goblin Replica, forcing Lebedowicz's hand. All of Lebedowicz's men immediately charged into the Red Zone.

Two Dross Golems, a Razor Golem, the Battlegeared Bats, the Skyhunter, the Nim Replica, the Silver Myr and the Den Guard. Wise lined up his blockers. Armored Bats on Bats. The two Replicas on the two Dross Golems, Frogmite on the Razor Golem, the Atog on the Den Guard, the Needlebug on the Nim Replica, and he was set to take three. Before damage he ate the chump-blocking Frogmite. Then damage was stacked. Wise blew up the Skeleton Shard with his Goblin. Lebedowicz sacrificed his Nim Replica in response and got it back, since he had no other artifact men in his graveyard. 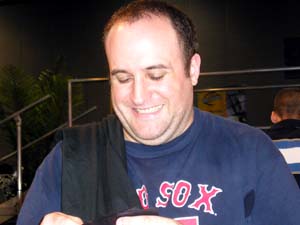 The dust settled. Lebedowicz didn't have enough left to make a go of it. Wise started recursing his Replica to decimate Lebedowicz's board. Soon he was left with just Grimclaw Bats, Leonin Skyhunter and Auriok Transfixer. He had Wise at seven, all he needed to do was to tap down his Arcbound Stinger, untap, draw Razor Barrier, and push his Bats (lethal thanks to six swamps) past Wise's only colored blocker. He failed to draw the card that made this plan possible, and the match was Wise's.