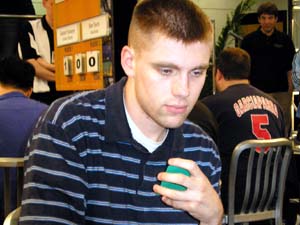 a lot of history between these players. Walls and Wagener met in the finals at US Nationals, at this very venue last year. Wagener came out on top, and Walls joined him on the US National team, along with Justin Gary. The trio went on to victory at Worlds in Berlin, and Walls made Top 8 of the individual competition to boot. Both are 3-2 going into this round, and need a win to stay in the tournament.

Walls had a great opening draw, curving out with Auriok Glaivemaster, Alpha Myr and Skyhunter Cub. Wagener played Neurok Spy, and blocked the Cub to force a trade. Walls came right back out, playing Krark-Clan Stoker and a second Glaivemaster. Wagener's Lumengrid Augur blocked and traded with the Stoker, and an Arcbound Bruiser seemed like it was going to stop Walls' assault. However, Bonesplitter came out to make a Glaivemaster much bigger, and it got through for four damage.

Wagener played AEther Spellbomb, and used it to bounce the Glaivemaster. It came right back out, and picked up the Bonesplitter. Wagener played an Isochron Scepter, and there was a brief pause.

Wagener used Trash for Treasure to sacrifice his blank Scepter, getting back the Spellbomb. He sacrificed it to get a card, and played Elf Replica. Walls played Soldier Replica, and attacked with the Glaivemaster. Wagener chump blocked with the Bruiser, making his Replica 5/5. Thanks to Domineer stealing Walls' Soldier Replica, the 5/5 would be able to handle the 4/2 first striking creature. The 5/5 Replica got through for damage, and Wagener had the board under control thanks to Icy Manipulator. Walls played Specter's Shroud, and put it on the Glaivemaster. Wagener tapped it down with the Icy, and Walls attacked with both of his creatures. Soldier Replica blocked Alpha Myr, but the Glaivemaster brought Wagener down to four, where Pulse of the Forge finished it.

Walls- "You like feature matches, don't you?"
Wagener- "Yeah."
Walls- "I hate them. It means you're playing someone good. Or Brian Hacker. He's had two feature matches today and I have no idea who he is."

Wagener- "I'm gonna keep this hand. I'm going to lose this game, I can't believe it."
Walls- "Are you listening to this guy?"

The hand contained plenty of good cards, but only one land and a Myr.

Wagener- "I just want to get really lucky."

Walls mulliganed his hand. Wagener played Arcbound Worker, and didn't draw a second land. It came on turn three and he played a Myr, but Walls had Spikeshot Goblin. Wagener handled the threat with Psychic Overload, and Walls summoned Slith Ascendant. Mask of Memory came out and went on the Worker, which attacked through the Ascendant for an activation. The Slith attacked through the air and grew, and Walls played Clockwork Condor. Domineer stole it, clearing the way for another attack with the Mask. Walls played Specter's Shroud, put it on his tapped down Spikeshot, and ended his turn with the Slith kept back. Wagener played Talon of Pain, which let the Worker trade with the Slith. Walls cast Razor Barrier to get the Overload off the Spikeshot, and it shot down a Myr. Skyhunter Cub came out and took the Shroud, giving Walls a solid blocker.

Wagener summoned Solemn Simulacrum, put the Mask on the Condor, and attacked to get a trade with the Cub. The Spikeshot killed the Simulacrum, and Wagener was now left without any creatures. Walls then played a Glaivemaster, and gave it the Shroud. Wagener summoned Nim Lasher, gave it the Mask, and used Electrostatic Bolt to kill the Spikeshot. The Glaivemaster attacked for three, and Walls brought out a Stoker to stop the Lasher. Wagener had Icy, however, and used it to get the Lasher through before playing Copper Myr. Walls played his own Talon of Pain and attacked with both his creatures- the Myr chump blocked the Stoker, and the Glaivemaster got through for damage. This put a counter on the Talon, allowing Walls to kill the Lasher. Wagener's Icy was providing an advantage at this point, and the Augur let him dig into better threats. Walls summoned Leonin Abunas, and Wagener played Sculpting Steel to copy the Icy. This was enough to convince Walls to concede.

Wagener had a first turn Arcbound Worker, and Walls played Alpha Myr. Wagener accelerated with Copper Myr, and Walls' Alpha Myr attacked to draw a block from the Worker, which became favorable thanks to Razor Barrier. Wagener played Vedalken Engineer, and Alpha Myr got through for two more damage, as Walls played Specter's Shroud and missed his third land drop. Wagener played Neurok Familiar and Mask of Memory, and Walls found a third land to play Slith Ascendant. Pewter Golem would have given Wagener a solid threat to get through Walls' defense, but that plan was stopped with Arrest. The Familiar traded with the Slith, and Sculpting Steel copied Pewter Golem. Taj-Nar Swordsmith allowed Walls to search out Bonesplitter. Wagener's Golem took the Mask, and was chump blocked by Alpha Myr. Wagener continued to improve his board with Soldevi Simulacrum, and the Swordsmith took the Shroud, getting through for damage. Walls played Razor Golem, and gave it the Bonesplitter.

Wagener attacked, and took a moment before activating his Mask and apologizing.

Walls- "Sure, go ahead."
Wagener- "We didn't actually move past the attack."
Walls- "I know, you're just the dumbest person alive. I was sure you were going to forget." 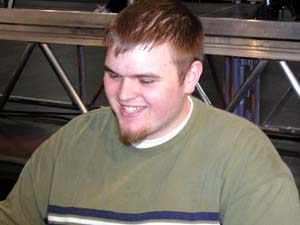 Thanks to Electrostatic Bolt for the Razor Golem, Wagener was able to get through the last damage to take the match.

1 Pulse of the Forge