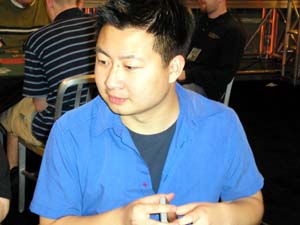 players were 5-0 at this point. Seck was sitting to Fabiano's right in the draft, and both had great decks. They had looked through each other's decks prior to the match, and Seck believe Gerard to be a significant favorite.

Gerard had the first creature, Iron Myr, and used it to accelerate out a Tel-Jilad Outrider. Seck came back with a turn-4 Icy Manipulator, and Gerard started smiling. "Oh, a turn-4 Icy Maniplator! How lucky! I hope I topdeck a Molder Slug!"

Osyp Lebedowicz leaned over from the other feature match as Gerard drew his card. "Oh, how lucky, a Molder Slug!" said Gerard after he drew.

"He didn't just draw that, liar," laughed Lebedowicz. The Slug came down and all Seck could do was make a 4/4 Promise of Power token. Gerard bashed with the Slug, and later added Loxodon Warhammer to it, ending it very quickly. If there was any question of whether Gerard should have taken the Icy or the Slug first, it was answered there.

Gerard had a good hand and played Myr on turns two and three. Seck had kept a six-land Electrostatic Bolt hand and needed to draw good cards to win. It didn't happen--Gerard played two Myr and ramped out a quick Rustmouth Ogre, followed by Triskelion and Mirror Golem. 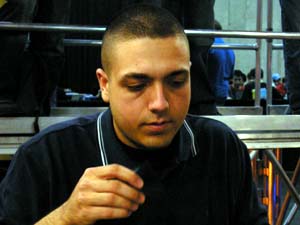 Seck's poor hand didn't get better… Yotian Soldier chumped-blocked the Ogre, the Bolt took out the Triskelion, but he had nothing after that. Gerard flashed the Warhammer in his hand, and Seck scooped up his cards.

Ben said afterwards, "I should have never kept that second hand, but I knew you had Slith Firewalker in your deck, and if it ever hit me I'd lose, so I kept the Bolt and hoped to draw well." All in all, Seck's deck had trouble with so many different cards in Gerard's deck that the stars really needed to align in order for Seck to win.