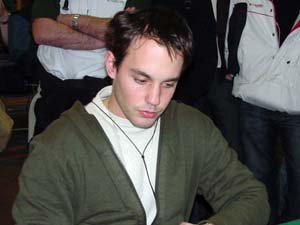 had to take a mulligan to start, and apparently kept a rather weak hand. He did play Faith's Feathers on Antoine's Nullmage Shepherd, but that didn't prevent him to convoke a turn five Siege-Wurm. Sam tried to race with Agrus Kos, Wojek Veteran, but eventually was forced to block the Wurm with Agrus and a Civic Wayfinder. Antoine had a Darkblast, and Sam conceded.

Game 2 went a lot better for Sam: By turn four, he had a Civic Wayfinder and a Loxodon Hierarch, while Antoine was stuck on three lands and busy discarding. The only spell Antoine played in that game was a Darkblast, whose effect on the Hierarch is extremely limited. 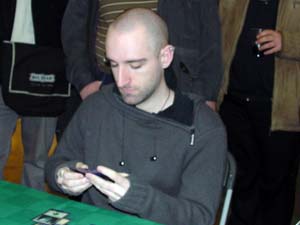 Sam Gomersall communicates with his hand

Antoine chose to go first in Game 3, and used Farseek to accelerate to three mana. However, he didn't have another land, and was forced to use his third turn playing a Dimir Infiltrator. Meanwhile, Sam was generating lots of power with Centaur Safeguard, Loxodon Hierarch and Selesnya Sagittars. Antoine found some extra lands, and was able to hold back Sam and generate an attack force of his own. Snapping Drake, Golgari Rotwurm and Siege Wurm were the main actors on his side. They would soon be degraded to supporting actors though, as Antoine used them and a Chord of Calling to convoke out the Sisters of Stone Death. The Sisters cleared Sam's side of the table, and Antoine's army had no one to stop them from winning the game for him.

Antoine won, 2-1, and was still undefeated